Several talented women will be competing, but the overall outcome has already been determined.

After winning the first three events and finishing second in the fourth event at Surfers Paradise, Lana Rogers was crowned an IronWoman, winning her first series title.

But for Rogers, this crown has been a long time in the making.

The IronWoman series is a five-event series which commenced in October 2019 with the Coolangatta Gold. The traditional racing formats and disciplines take place being the ski, board and swim.

But Rogers’ preparation for this series began five months before the first event when she started a strict 20-week training program.

During that period, a typical day for Rogers would include a two-hour gym session in the morning, followed by an 8-10 kilometre run in the afternoon with a two-hour ski or board session too. In the lead up to the first event, her training would change to shorter sessions more focused on speed and transitions.

For Rogers, the pillars of her success this season have been her coaches Darren Mercer and Sharlene Kelly and this 20-week program which she stuck to meticulously.

‘People thought I was crazy sticking to such a tough training schedule for such a long period, but I stuck to it and achieved my goal’.

‘I also grew up a lot mentally and physically over this offseason and I am in a completely different headspace when racing and training.’

This crown has been a long-term goal for Rogers, who decided that when she finished school she wanted to be an IronWoman. She had always been a talented swimmer and swam both in the surf and in the pool, but after school she began to focus on the other elements of the race, particularly running.

Pursuit of this dream involved a move from Rockhampton down to Noosa with her parents to train. It will come as no surprise to any of you that the surf in Rockhampton is sub-optimal and Surfers Paradise has been an ideal place for Rogers to pursue her dream.

But at one point, this dream would not have been possible. It was only in the early 1990s that women were first able to compete in IronWoman events, beginning with the swim, run and board formats of the race, with the ski part only being incorporated years later.

‘The sport has really changed over the last couple of years. It wasn’t that long ago that the Coolangatta Gold was a different distance for women than it was for the men’, says Rogers.

Largely thanks to the efforts and protesting of now three-time Coolangatta Gold winner Hayley Bateup, the women’s race was eventually upgraded to the full distance meaning the same distance is covered by the men and women. Equality in the sport has taken further steps forward too. Now, in the Nutri-Grain IronWoman series men and women compete for the same prize money. 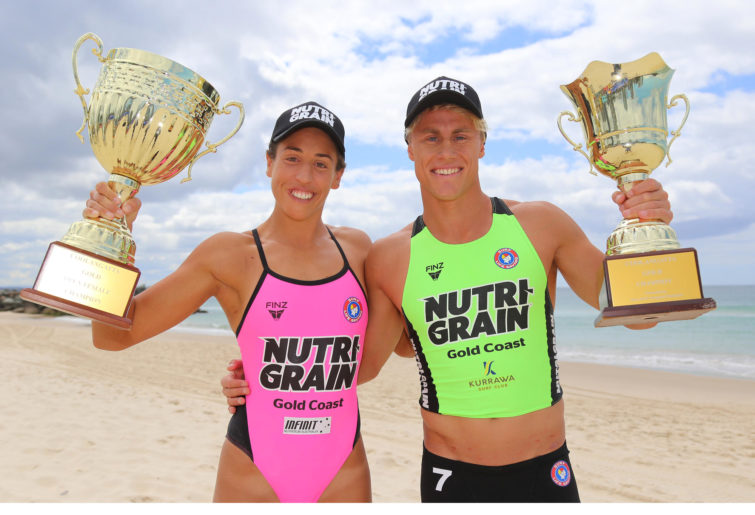 Rogers also describes a sense of comradery between the women that compete.

‘We have come a long way and the women that compete really encourage each other, especially when we are on the start line. It is great to travel with such a talented group of women that are wanting to change the face of the sport for young women and make it a traditional’, says Rogers.

Leading into the final event, Rogers says that the women to watch are Georgia Miller and Lizzie Welborne. But no doubt, Rogers will want to finish the series win a win; it would be the perfect finish to what has been a dream season for the talented athlete.

The only challenge for Rogers and her family will be finding room in the trophy cabinet for her crown because she isn’t the only person in her family to have achieved sporting success; her grandfather was the captain of the Sydney Roosters in 1948 (making her a diehard Roosters fan), her dad was a surf race world champion, competed at two Olympic Games and broke a world record in 1968 and her sister will be trialling for the Tokyo Olympics in the 400 freestyle in the coming months.

And Rogers is just getting started; she has her sights firmly set on the State Titles in late March and the Australian Titles at the end of April.

The final event in the Nutri-Grain IronWoman series will take place from 2:00-4:00 pm AEDT on Sunday and will be broadcast live on Fox Sports.