Cheating goes against the fabric of competition, the ethos of fair play. Since the dawn of time, human beings have strived to find an edge against their opponents, whether that be other tribes and armies or the person with the ball.

Baseball is embroiled in yet another controversy, the biggest since the steroid era of the 1980s and ’90s. This time, it isn’t performance-enhancing drugs – it’s the controversial practice of sign stealing and the 2017 title-winning Houston Astros.

For the uninitiated, sign stealing involves identifying what pitch is being delivered by observing the communication between a catcher and pitcher. Messages are sent through hand signals so that pitcher and catcher are aware of what’s coming. Sign stealing has been acknowledged as a grey area, albeit legal, but a recent directive advised technology was not to be used.

Imagine you are batting in cricket and you know a bouncer is coming. Alternatively, you are a fullback and you know the opposition half is going to kick on the fourth tackle. Now imagine you know the next pitch is coming straight down the middle, a fast ball. You anchor your weight to your back leg, you load up and swing for the fences.

The Astros initially had spotters watching from the end of the field and were crudely communicating pitches by banging trash cans. If you heard a bang, you knew what was coming. Across the league, all teams knew that something was up in Houston. 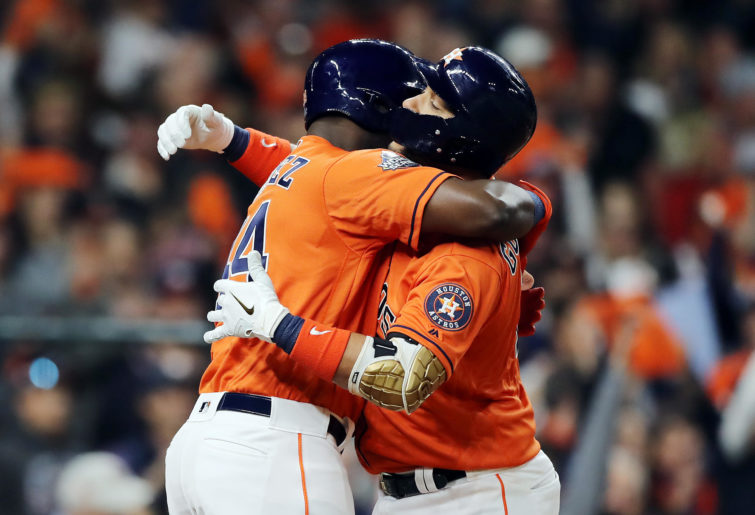 The Astros made it all the way to the 2019 World Series. (Photo by Elsa/Getty Images)

Undeniably a talented team, Minute Maid Park turned into a fortress in a sport that doesn’t have a strong home advantage mechanic. Spotters turned to cameras and video feeds into the dugout, which is where the problem lies.

The Houston Astros have been handed unprecedented punishments as a result of their actions over the recent years – a US$5 million (A$7.3 million) fine as an organisation, their first and second-round draft picks stripped, coach and general manager suspended for a year before the owner fired them.

The players still active in the league are untouched due to the strongest union in American sport combined with collectively bargained punishments that don’t account for this level of cheating. Carlos Beltran, recently appointed manager of the New York Mets, has been stood down amid the drama. Alex Cora, the alleged mastermind at the Astros in 2017, has been fired from managing the Boston Red Sox.

The latest development in what is a quintessentially 2020 situation comes from a Twitter handle claiming to be Carlos Beltran’s niece, suggesting that multiple players wore devices to communicate pitches. Accusers point to a 2019 playoffs game where Astros star Jose Altuve hit a home run and made an overt effort to keep his jersey on. He was even caught on hot microphones telling his teammates to be careful.

In Australian terms, this is the Australian cricket team combined with the Melbourne Storm. The Storm’s cheating was systematic and organisationally driven, however the individual players can’t realistically be held accountable as they didn’t directly affect the outcome of matches. The Astros players knowingly and intentionally conspired to break established rules and protocols and haven’t been punished for it to date.

Ask any franchise owner privately whether a championship is worth US$5 million and you’ll get told it’s a bargain.

Baseball is struggling to maintain relevance, but if there’s one thing that attracts eyes, it’s a drama like this. This is dominating the US news cycles as the NFL approaches the Super Bowl, which is unheard of.

Grab the popcorn – this ain’t over yet.