The 2020 Super Rugby and Test season marks the first time that the national side, the Wallabies, and the powerhouse of rugby in Australia, the Waratahs, are being coached by New Zealanders at the same time.

There is no disrespect to the two New Zealand coaches, Dave Rennie and Rob Penney, to say that when their time is up with the Wallabies and the Waratahs, hopefully after successful tenures, that they are replaced by Australians.

The rugby code will be strong again in this country, on and off the field, when every aspect of its management, coaching and playing is run by Australians.

South Africa’s marvellous triumph in the 2019 Rugby World Cup tournament is an example of how a beleaguered rugby administration went back to its own homegrown expertise at every level of the game to create a winning national team.

The Australian rugby community has had its greatest successes with its own locally produced coaches, players and administrators.

After all, the Wallabies’ two Rugby World triumphs in 1991 and 1999 were the product of the amateur era production line of Australian administrators, players and coaches.

Before that, there was arguably Australia’s greatest Test side, the Grand Slam Wallabies of 1984.

And let us not forget that the last time the Wallabies defeated the All Blacks at Eden Park was in 1986.

No foreign-born head coach has won the Rugby World Cup or Super Rugby.

This is the context in which the appointments of Dave Rennie and Rob Penney need to be placed.

Wales and Ireland, with New Zealand-born coaches and Six Nations Grand Slams to their credit, have been unsuccessful in the last two Rugby World Cups.

England won their only tournament in 2003 when Sir Clive Woodward, a former England player, was the coach.

The evidence is powerful that the major rugby countries weaken their World Cup chances when they import the head coaches of their national sides.

Notice this rule should only apply to head coaches.

There is nothing wrong, indeed the proposal has a great deal of merit, of using overseas coaching talent in other specific roles. The Crusaders, for instance, benefited greatly from having Ronan O’Gara as their attack coach last season.

In the professional era, the head coach rules the roost because he controls the roster.

Admittedly, I was all for Robbie Deans, with his stellar record of winning Super Rugby titles with the Crusaders, taking over the Wallabies.

But the experiment was not a success, even though it seemed an attractive option for Australian rugby at the time.

The Bledisloe Cup was not regained, even for a season. The British and Irish Lions won their series here. The Wallabies did make the semi-final of the 2011 World Cup in New Zealand, but they also lost a pool round match to Ireland.

Deans, unfortunately, was never accepted by a significant part of the rugby community, especially a number of media commentators.

He was accused of being a ‘Trojan Horse‘ for the New Zealand rugby by a former Wallaby in his capacity as an influential commentator.

The accusation gets to the heart of the difficulty facing an outsider, especially a New Zealander.

The local patriots believe that the coach, in his heart of hearts, would prefer being the coach of the All Blacks.

The history of success for Australian rugby has come from Australian coaches who have come through the ranks, graduating from the club and representative levels and then through to the national side.

There are only three such coaches: Alan Jones, Bob Dwyer and Rod Macqueen (who coached the 1991 NSW Waratahs to an undefeated season). The professional era has yet to produce a successor to these three giants. 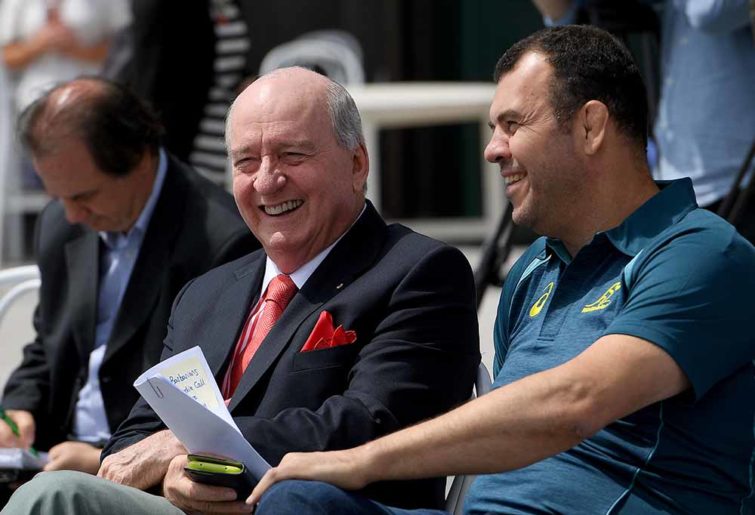 A possible reason for this is that there is no clear and or obvious pathway for Australian coaches, as there was in the past, from coaching at schools, clubs, to the state levels, and then to the Test level.

This lack of a clear pathway through to the highest coaching levels has been accentuated by the fact administrators are beginning to look for quick fixes by appointing outsiders.

This is how Dave Rennie and Rob Penney were selected.

We do not know who the other candidates were for those positions. Were there any Australian candidates? How well qualified were they?

What makes the appointment of Penney all the more disappointing is that Daryl Gibson was given an extension as head coach less than a year ago, which created an opportunity for an Australian to be found to replace him.

These are all jobs that should go to Australians.

Fox Sports screens its Super Rugby Special Launch on Thursday, which will be hosted by the excellent Greg Clark.

This launch looks like being the sort of exciting event that Fox Sports does well. It will feature interviews with the new Wallabies coach, Dave Rennie, and the chief executive of Rugby Australia, Raelene Castle.

Perhaps Castle might be asked to explain what system has been put in place by Rugby Australia to ensure that head coaches and top administrators are Australians or identify as Australians by committing to live in this country permanently.

Bringing in New Zealand head coaches and chief executives is not the way to save Australian rugby.

The South African and New Zealand way of using their own rugby talent, on and off the field, is the way forward for Rugby Australia.