Kane this week became the latest player to reach the special 1000-point milestone, thanks to his 4-1 goal Sunday in the Blackhawks’ 5-2 home win against the Jets.

After skating behind the net to receive a pass, Kane fed the puck out front to Ryan Carpenter, who squared it to Brandon Saad to slot home into a wide-open net. As they say, the rest is history.

The way Kane’s Blackhawks teammates emptied the bench to celebrate the achievement shows his standing within the locker room and the franchise itself. 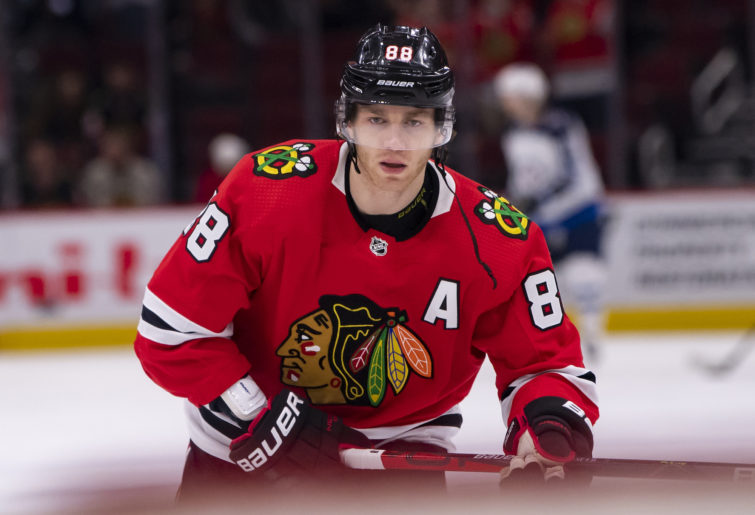 The now 31-year-old Kane – yes, that 88 on his back is his birth year – has spent his entire NHL career in Chicago. After being selected number one overall in 2007, Kane’s scoring has helped lead the Blackhawks to three Stanley Cups since. There’s just something special about one-club players.

Kane joins an elite group. This makes Patrick Kane the youngest US-born player to reach the 1000-point milestone, joining an elite group of just 89 other players in NHL history to do it.

By reaching the feat at 31 years and 61 days, Kane pipped Jeremy Roenick who was a crusty 32 years and 13 days when he racked up his 1000th.

So happy for Patrick Kane who collected his 1,000th @NHL point! He is one of the most talented players to ever play, and deserves this milestone. What a moment for him, the @NHLBlackhawks organization, fans and City of Chicago. What a career so far! Congrats Kaner! ????????

Throughout the Chicago Blackhawks’ storied history dating back to 1926, only Stan Mikita, Bobby Hull and Denis Savard had scored 1000 points for the franchise. Patrick Kane’s name now sits alongside the legends in that list.

To put this achievement into perspective, it has been just under 30 years since the last Blackhawk racked up the 1000. Kane was just one year old when Savard assisted on a goal by Al Secord to record his 1000th point back in 1990.

“It’s a great franchise, and there have been a lot of amazing players that have played here,” Kane said after the Jets game.

Sitting at 1000, Kane has another 468 points to go before surpassing Mikita’s 1467 points and reaching the top of the Blackhawks’ all-time scoring list. It’s now over to Kane to see how far he can go.

Can the Blackhawks really make the playoffs? Who would have thought that anyone would be asking that question barely a month ago?

But after five wins in a row, the Blackhawks are one of the hottest teams in the NHL thanks to a scoring streak from Patrick Kane and his partner in crime Jonathan Toews.

When you take a look at the playoff race heading into the All-Star break, things are really starting to look good indeed.

LA Kings sit 16 points out of the playoffs going i to the bye week. @GoldenKnights play tomorrow against the @NHLBruins. A win for vegas could shift the pacific around???? #LAKings #Lakingsinsider #nhlstandings pic.twitter.com/Xxm42pBK3c

Equal with the Jets on 54 points, they only trail the Golden Knights and Coyotes, who currently occupy those final spots with 57 points.

In a league that gives losers points across conference games, three points is nothing. The race is on.

But if you talk to anyone who plays the game, personal accolades always come second to team accolades. Patrick Kane is no different here.

Kane’s 1000th point keeping the Blackhawks in the hunt is the real story. Watch out for those Blackhawks.