Steve Smith says Englishman Tom Curran has done his job for the Sydney Sixers and it’s up to the rest of the squad to finish off their BBL finals campaign.

Steve Smith rates departing bowler Tom Curran a big loss for the Sydney Sixers, but the man himself is confident they have the depth to contend for the BBL title without him.

Curran leaves on Sunday to go to South Africa, where he is in the England squad for the T20 and ODI series against that nation.

He signed off with the Sixers in style on Saturday, starring with 3-27 in a seven-wicket home win over Melbourne Renegades.

Curran has been the Sixers’ most prolific wicket taker with 22, second highest in the competition behind Thunder paceman Daniel Sams. 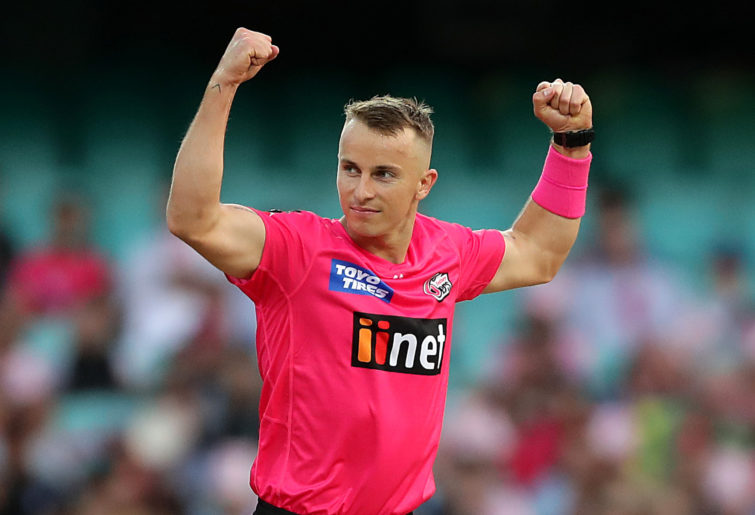 Tom Curran of the Sixers. (Photo by Mark Metcalfe/Getty Images)

The 22-year-old also boasts a batting strike rate of 149 and produced some sparkling cameos, most notably an innings of 35 off 17 balls in the first Sydney Smash of the season.

That effort hauled a previously struggling Sixers side into a super over, in which they won the game, and he also blasted an unbeaten 43 off 21 balls in a win over Perth Scorchers.

“He has been magnificent with the ball and under pressure with the bat as well,” Smith said after his match-sealing 66 not out on Saturday lifted the Sixers into second.

“He’s going to be a big loss for us, but he’s done his job as an overseas player helping get us to the finals, so now it’s our job to get it done for him.”

Test stars Smith, Josh Hazlewood and Nathan Lyon are apparently available for the reminder of the BBL, and fellow Australian representatives Jackson Bird and Sean Abbott are vying to replace Curran.

“We were winning games in the middle of the tournament against Adelaide Strikers, who are arguably one of the best teams in the tournament, (we were) missing four, five absolutely gun players, so the depth to our side is really strong,” Curran said.

Curran’s bowling has improved as the tournament has progressed after he conceded 58 runs in two of his early season matches.

Across his last two games he took 5-52 from eight overs.

“The first half of my tournament was a mixture of either man or the match or getting absolutely pumped,” Curran said.

“I feel like the last two or three games I’m back to bowling at my best.

“I’ve worked on a couple of other slower balls which have a bit more subtle change of pace rather than a real drop in pace with the back of the hand and I’m nailing my yorkers again.

“I’m feeling in a really good good place going into the ODIs and T20s in South Africa.”