Israel Folau and the governing bodies who are powerless to govern

Should Catalans Dragons have signed Israel Folau? Should they have been allowed to sign Israel Folau? This is the water cooler discussion on both sides of the world for rugby league and some rugby union fans this morning.

I will get to that.

But my biggest concern – and there were some great ones since, from the likes of Wigan saying their home game against Catalans “will now be Pride Day, as the Warriors look support the LGBTQ+ community” and for gay player Keegan Hirst – were these statements.

“We don’t believe that, under our current regulatory framework, these can prevent his participation in the sport,” from the Rugby Football League.

And from Super League chief executive Robert Elstone: “Super League does not have the authority to veto the registration of players.”

????️‍???? @WiganWarriorsRL can confirm that their round six game against @DragonsOfficiel on Sunday 22nd March will now be Pride Day, as the Warriors look support the LGBTQ+ community.

This goes to the heart of structural and philosophical flaws for the game in the northern hemisphere and is one the best examples we’ve ever seen of why the American (and then Australian) models for pro sports – where clubs are mere franchises of the governing body – are superior in every way to the feudal English concept of the league just organising fixtures and butting out of everything else.

That model just does not work in the modern world where sponsors and the public can be alienated so easily by not responding correctly to the issue of the day, which itself can be different to the issue of yesterday or that of tomorrow.

If Super League cannot veto the registration of players, it can only save some face by announcing today that it is changing its legal relationship with the RFL so it can.

The same goes for the RFL but just last year, the same body told The Sun: “The RFL board has ultimate discretion to refuse to register a player where it may bring the game into disrepute or he has been deregistered by any other governing body.”

So in assessing the RFL’s position, we must at least consider the possibility that it received legal advice Folau would sue them and win if it tried to block his registration. As a result of its backing down, it no longer has an authority it claimed to have only a year ago.

But we already know ‘authority’ is a word that can only be applied loosely to the RFL in 2020. It doesn’t have much left, having suffered the humiliation of Super League breaking away and poaching most of its staff.

Last year, the RFL was so worried about an overseas team making the Challenge Cup final and adversely affecting the crowd that it asked Catalans and Toronto to insure it against the possibility they might be successful.

Catalans and Toronto aren’t, in the 19th-century terms of the RFL’s structures, ‘members’. They are ‘invited’ to play in the RFL’s competitions. And the rules can be altered at a moment’s notice for non-members. So it can ask Catalans for a cash guarantee to defend its title but it can’t bar an international social-issue pariah from playing for them? 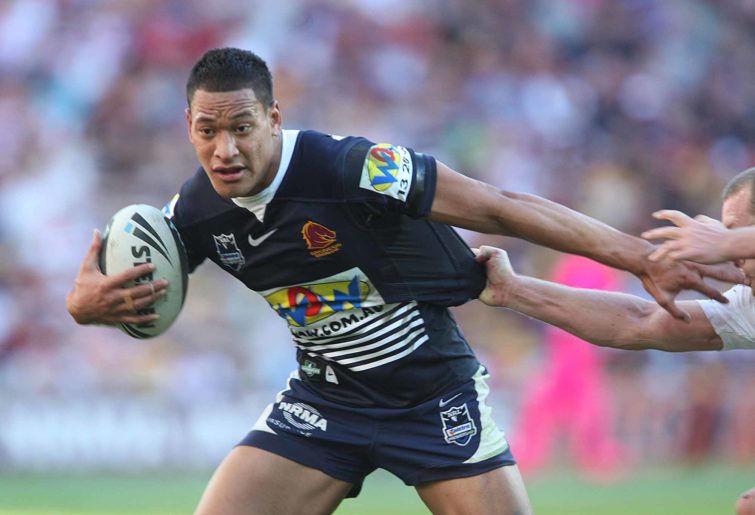 Here is where the brouhaha splits in two.

On the one hand, there are the antiquated structures and local culture that make issues like the NRL campaigning for same-sex marriage, shelving the national anthem and locking out Izzy so very, very hard for British officials to contemplate.

But on the other is the meek reluctance to even consider trying to do these things. If you can’t fill Wembley then don’t play there. If standing up for your values sends you broke, go broke.

Fighting Israel Folau in court could have been the making of the RFL. No national newspaper in England has a rugby league writer on staff. They all have court reporters. The game would have been in front of the public for months and just about everyone, bar the Christian far right, would have admired their stance.

And if they lost and went broke? Someone would have to run rugby league in the UK. The game would still be played, there would need to be referees. There would be some TV rights income and government funding which would need administering.

What rose in the RFL’s ashes would possibly be better than what’s there now.

A couple more points, lest I be accused of skating over salient issues.

Yes, Catalans’ recruitment policy is appalling. They are a rogues’ gallery to rival Souths before Russell Crowe took over. What’s more, their morally bankrupt approach to signings doesn’t work – and yet they persist.

Secondly, as I explained in a previous column, I personally find Folau’s comments ridiculous more than anything. He represents religion and reminds us all of the folly of trying to adopt dangerous ancient doctrine for selective modern values.

Religion is the enemy, not Folau.

But – and this is the big ‘but’ – a young person struggling with his or her sexuality does not have the luxury of being so dismissive.

You can take the long view on these issues but it’s the here and now where the potential for harm lies.

It’s a trope of our times: one person’s ‘freedom’ to express antiquated views against the freedom of a minority not to be subjected to those views.

But I go back to my original point – two organisations that call themselves ‘governing’ bodies who don’t want a player in their competition yet claim they don’t have the power to stop him being in it.