You can see what Collingwood were thinking.

They’ve already got some really great kids from last season’s draft in compensation for losing a bunch of players, mostly to North Melbourne.

But that influx of kids left the team with a very young, inexperienced line-up, so they just wanted that one more big star to tie the whole thing together. They need a leader on and off the field who could provide those kids with someone for them to look up to, and galvanise a group who, let’s face it, must have been a bit demoralised over the past few years.

And so they traded their number two draft pick to Carlton for Brianna Davey, and their 26th draft pick, and their 44th, and their 59th, in return for Carlton’s picks 67 and 82.

Now there’s no question that Davey fits the bill, and is one of the best players in the AFLW. She’s also by all accounts a great captain and leader (if you don’t count dumping your old club for a new one as a failure of leadership).

But Carlton then spent that number two pick on Lucy McEvoy, who will possibly be as good as Davey in her very first season, will likely get somewhat better than Davey in seasons after that, and is reputedly one of the best on and off-field leaders anyone in junior girls’ football has ever seen.

She could have been Collingwood’s, plus whoever the Blues grabbed with those other picks the Pies traded, so it’s very hard to see how the Pies come out ahead on this one.

But having said all of that, Collingwood could have a very big season anyway. The thing that really killed the Pies last year was that a) they lost their then-best player Chloe Molloy to a foot injury, and b) their playing strategy was quite awful, leading them to finish the season with 23 points per game, the second-lowest in the league, and to make football journalists sincerely hope they got to cover someone else’s games because the Pies were so ugly.

This year the Pies have a new coach in Steve Symonds, and one would strongly suspect a new gameplan to go with it — in a press conference, Symonds referred to the style he wants to play this year as ‘upbeat’, by which we can deduce that he thought the previous style was ‘downbeat’.

And gosh dang it, if this team would just get out and run instead of throwing everyone at the ball like some reenactment of the Battle of Agincourt, they could really shock some people, because they’ve got some very serious players.

Their midfield with Davey (assuming she plays there, but it seems a safe bet given it was her strongest position for Carlton last year and it’s where the Pies most need help) will see her teaming with one of the comp’s other-best midfielders in Jamee Lambert, and the hard working Brit Bonnici. 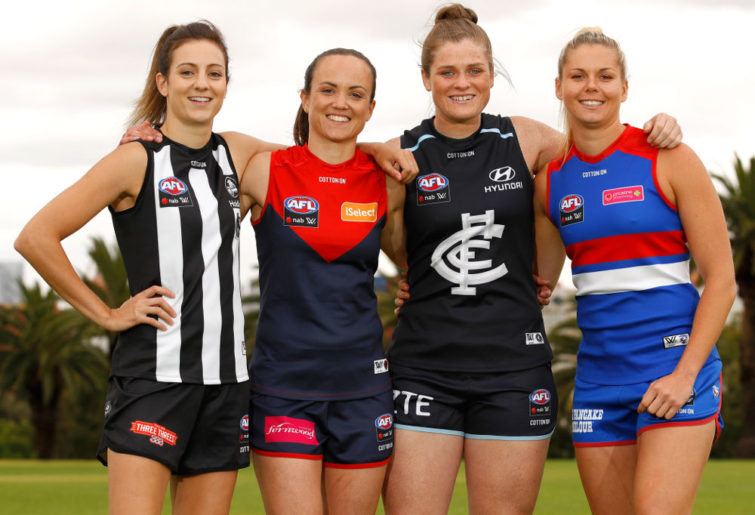 Brianna Davey, here in a Carlton strip, made the move to the Pies. (Photo by Michael Willson/AFL Media)

Then, perhaps on a wing as she understands more of the game in her second season, could be Irishwoman Sarah Rowe, who was one of the best runners in the AFLW last year, and won a heap of possession by leaving her direct opponent blue-faced and gasping behind her, Andrew Gaff style.

They’ve got Mikala Cann, too, an athletic young basketball convert and tackling machine with a big upside just waiting for a new team gameplan for a breakout year.

Down back the Pies look strong as well — Stacey Livingston is one of the league’s best big-bodied defenders, Steph Chiocci lends speed and experience directing traffic across halfback, Jordyn Allen was a junior halfback star with great run from whom large things are expected, and then netball dual-coder Ash Brazil might just be Collingwood’s most talented player, with electric speed and X-factor, often playing like a woman among girls.

They’ve got depth there too, with Ruby Schliecher always reliable, and Lauren Butler another improving youngster.

This is of course assuming that Chloe Molloy plays up forward this year — which seems likely given the Pies’ difficulty scoring last year, and their otherwise impressive strength down back.

Molloy’s still only 20, the second pick of the AFLW’s first post-formation draft along with Izzy Huntington and Monique Conti, and curiously has been often compared in style to Bri Davey — a strong-bodied athlete too fast and powerful for direct opponents to stop.

She’ll be a huge addition to the Pies’ forward line, and is capable of kicking bags.

Sarah D’Arcy is a hard-charging (and occasionally over-aggressive) small forward, Katie Lynch is a junior star of the 2018 draft, and Irishwoman Aishling Sheridan hasn’t been seen yet with a Sherrin in hand, but given the conversion rate of Gaelic to Aussie Rules women lately, there’s every reason to expect she’ll be good.

The forward line isn’t quite as exciting a line-up as the Collingwood backline, but when you add it all up, the Pies have lots of talent, and between Davey, Lambert, Brazil and Molloy, some genuine stars.

If a few of those kids get their first burst of confidence in the new year, we might be adding Allen to those stars, and possibly Rowe as well. Carlton were down in the dumps before last year too, but when they started to win, their youngsters in particular started beaming and grinning like the world was their oyster. Steve Symonds’ first task will be to get that look on the Pies’ girls’ faces too.

I’ve been hearing on the grapevine that many female players find this sluggish defensive play very boring and demotivating, so just playing a faster, more attractive style should help boost team morale even if it takes a few games to start showing results (again, see Carlton last year). 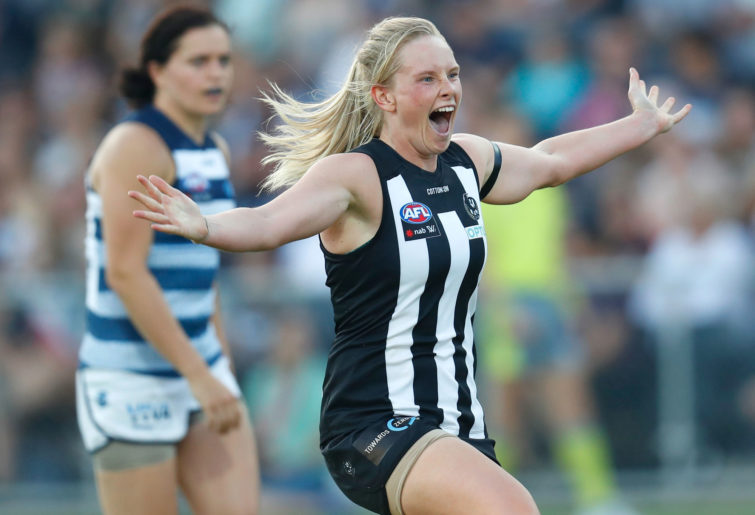 Last year I had my best pre-season prediction success by picking Carlton to make the grand final. This year Collingwood look to be in a nearly identical situation — a new coach, an upbeat playing style, several new big-name stars and lots of young talent just looking for an opportunity to flourish as they get out and run.

The AFLW always throws up surprises in the form of big, sudden turnarounds in teams’ fortunes, and this season I’m betting the Pies will be one of them.