The great Australian openside debate: Round 1

At the end of each World Cup cycle, everything is thrown back into the melting pot. The certainties of the previous four years dissolve as quickly as newspaper in rain, and minds turn to what the horizon may look like in 2023.

On the first weekend of the 2020 Six Nations, four coaches were new to their positions.

One week before the start of the Super Rugby season, Waratahs captain Michael Hooper relinquished the post he had manned since 2016.

Hooper made it clear that his decision was not a knee-jerk reaction.

“I went into last season fully committed to the role but also having question marks over my position as captain. With a change of coach and Rob [Penney] coming in, Rob’s been amazing around giving me the time to really mull it over…

“There’s much more than just running them out on the park, leading the team out on the weekend. There’s the performances of teams that weigh into it, there’s [the media] … having to speak every week is tough and tiring sometimes, to try to get the message right and represent the team as best as possible.”

Hooper no doubt sees the step back as a way of concentrating his efforts fully on improving his standard of play as a number 7. Perhaps it was no coincidence that new Wallabies head coach Dave Rennie arrived later on the same day Hooper made his announcement. It would be no surprise at all if he makes the same decision with the national team captaincy.

All of which brings the debate about who should wear the number 7 shirt, and what kind of back-row combination Rennie should aim to select later in the year, more sharply into focus.

At the Waratahs, Hooper is likely to start in a traditional back-row, with a big ball runner at 8 in Jed Holloway supported by another big man (either Lachie Swinton or Jack Dempsey) on the blindside flank.

In Queensland, the situation is more flexible. Wright may stay at 7 with Angus Scott-Young at number 6 and the promising Harry Wilson in between them, and that was the arrangement for the first game against the Brumbies. Or he may be moved to the blindside in order to accommodate the precocious talent of Fraser McReight, the captain of last year’s outstanding Junior Wallabies, when he returns from injury.

Wright and Hooper embody different versions of the same position. Although Hooper is five inches shorter than Wright, at his official listed weight he is three kilos heavier. Wright is long, lean and cussed. Hooper is short, fast and explosive.

The first round of the season offered some tantalising glimpses of how both would interpret the Wallabies’ number 7 jersey, and indeed about whether their talents could be combined within the same unit.

As a base, we can use the stats derived from the Fox Sports Laboratory for the 2019 Super Rugby season. On attack, the 2019 averages per game looked like this:

The results from each players’ Round 1 efforts were as follows:

Neither Hooper nor Wright were used as a lineout option over the weekend, with Wright, despite his height, tending to line up as in the halfback position as the ‘plus one’ forward.

As an offensive player, Hooper is unquestionably the more dynamic threat of the two. He gets the ball in his hands more (he had twice as many carries over the weekend) and can bend the line and create attacking opportunities.

The more pertinent aspect was the differences between the two in defence, where it became clear that Wright and Hooper have contrasting roles.

The following are the basic stats from 2019 and the games played on the weekend:

In 2019, Hooper averaged more than four more tackles per game, but Wright made three times as many turnovers, and herein lies the main clue to how they are expected to operate within their teams.

In Michael Cheika sides (provincial and national) between 2014 and 2019, Hooper was positioned in the number 10 channel to make the tackles (it was assumed) Bernard Foley could not. For the Wallabies, David Pocock would then pick up the shrapnel from the collision and gain turnover ball.

The Reds do not want Wright making the majority of their tackles, they want him to be the first man in after the tackle has been made by someone else.

Let’s take a look at how Wright’s relationship with the Reds’ number 10, Isaac Lucas, was pressurised by the Brumbies early in the first half at Canberra. The solidity of that 7-10 relationship is a key measure of defensive reliability in general:

The Brumbies decided to run their powerful ex-league winger, Solomone Kata, on an angle at Lucas’ outside shoulder from lineouts in the red zone. Kata is built low to the ground and is a hard man to bring down.

From the first lineout, he breaks straight past Wright and boulders into Lucas to win the gainline convincingly. In the fourth minute, he runs over the top of the Reds number 10 with Wright too far away to ‘bodyguard’ the outside-half on the play: 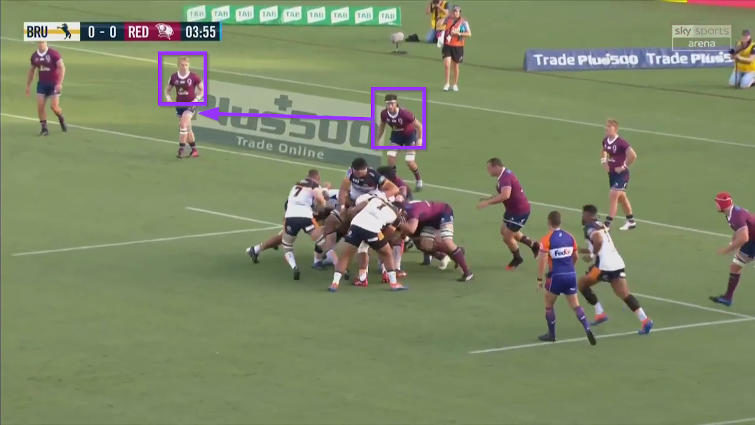 There’s roughly a nine-metre gap between Lucas and Wright, and that means the small Reds’ number 10 is expected to make the tackle without assistance. Second phase takes the Brumbies all the way up the shadow of the Queensland posts despite Wright’s tackle on Folau Fainga’a, and Irae Simone finishes the move on the next play:

The real purpose behind the Reds defence in these situations only became evident on the next occasion the Ponies tried to launch the Kata missile from lineout:

Lucas makes a better fist of the tackle, and Wright is shadowing in behind him to pounce on the deck. James O’Connor also plays a smart role on the play by helping to obstruct the cleanout by Simone and give Wright a free shot at the ball.

It was the first of three turnovers Wright made at the post-tackle:

In all three scenarios Wright is offset, or ‘refused’, from the line so that another defender can make the tackle and he is free to attack the ball on the floor: 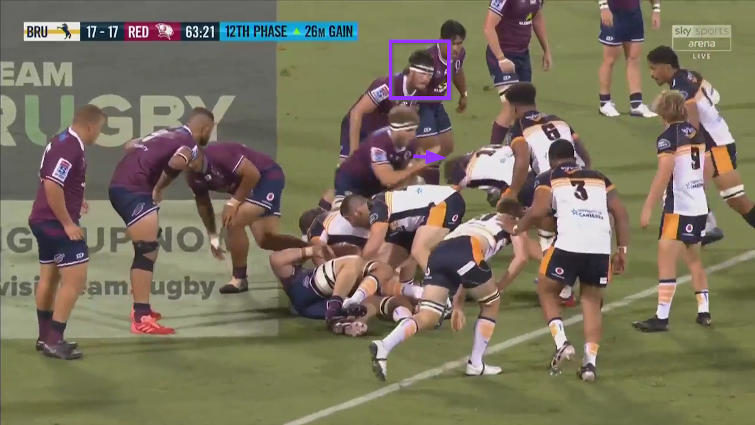 It also explains why on Saturday, Hooper’s two turnovers on the ground (the third came from a hold-up tackle above ground) derived from positions where he was also the tackler in the first place. This is a typical example:

There is a danger that Wright’s ball-hawking can leave the defence short on numbers on the following phase of play:

The Reds’ number 7 is tempted to die in a losing cause on first phase, where most European opensides would probably have kept themselves alive for the following play. At the key moment, an attractive attacking scenario is opening up for the Brumbies – at least before Noah Lolesio drops the ball! 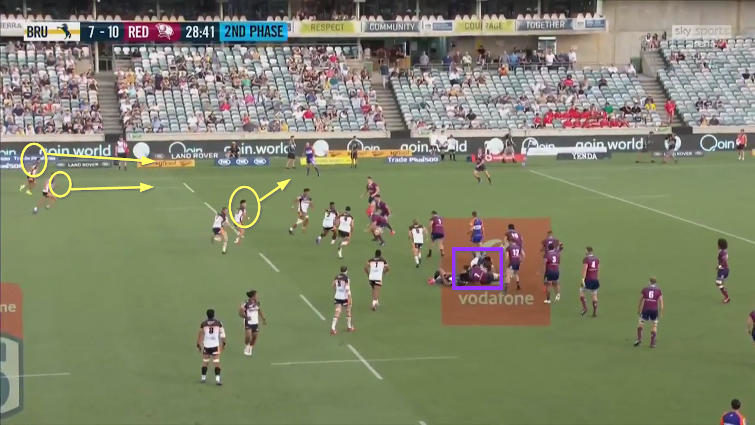 The other main reason why Hooper makes more tackles is more straightforward. Where Wright tends to defend in an orb no more than 10-15 metres away from the ruck, Hooper’s remarkable speed and recovery level means he can involve himself in positions where he has no right to be:

Hooper runs all the way around Karmichael Hunt to charge the kicker and get a hand on the exit, giving Kurtley Beale a nice opportunity to counter. But Hooper had started the play from his post at the front of a lineout: 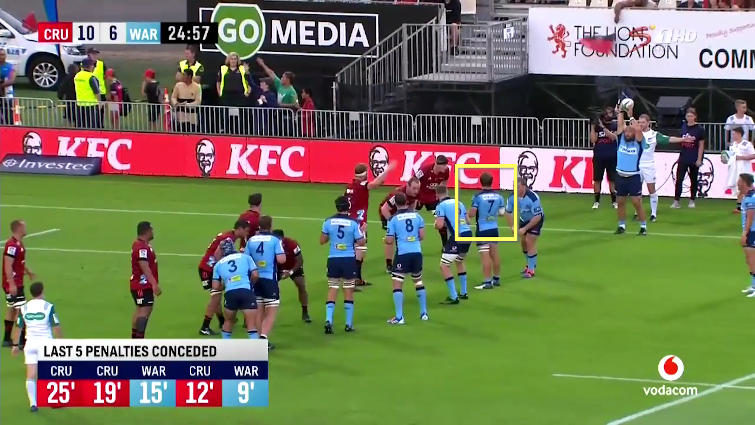 It is Hooper’s extensive ground coverage and ability to involve himself in the scramble defence which often explains the number of missed tackles on the stats sheet:

Hooper runs past the entire NSW midfield in cover defence only to be bumped off by winger Alex Newsome, who was originally beaten on the play. The double knockdown allows Leicester Fainga’anuku to gallop away and score for the Crusaders.

Summary
The elevation of a new Wallabies head coach, and one from outside Australia in Kiwi Dave Rennie, promises a fascinating re-evaluation of Australia’s back-row requirements in the next World Cup cycle.

That process of reassessment applies especially to the blue riband number 7 position which is so prized in New Zealand. Michael Hooper has relinquished the captaincy of the Waratahs and taken a step back, just as Liam Wright has taken one forward as the new leader of the Reds.

It is these two who will be seen as the main rivals for openside flanker when Rennie picks his side Ireland’s visit in July. Then again, maybe they will not turn out to be rivals at all, but complements on each side of Isi Naisarani in the Wallabies back row.

Wright and Hooper possess very little in common as rugby players besides having the same number on their jersey when they trot out onto the field.

Hooper is small, compact, fast and explosive in the open. Wright is tall and wiry and loves the grind of a tighter game. Hooper’s world is the entire width and depth of the field, Wright’s is 15 metres either side of a ruck or set-piece. On attack, where Hooper is a primary runner, Wright focuses on cleanout and support. On defence, where Hooper tackles, Wright jackals.

At present, it is hard to look past Michael Hooper’s extraordinary workrate if the pair are viewed in a competition. But who is to say the two cannot play together if Liam Wright rises to the challenge of the Reds captaincy and proves himself ready for the next level of Test match football?

Yin and Yang are not really opposites at all – but they only blend when found in proper balance.