Every cricket follower loves to see a new talent emerge from the pack. Few make it to the top. Trying to identify who will make it occupies the minds of fans and those whose job it is to find the next good thing.

I first saw Mac Wright in 2008 at the nets of the Pambula Cricket Club in the Far South Coast of New South Wales, the beautiful Sapphire Coast region. He was a small ten-year-old running around at the senior practice, fielding every ball that got hit past the bowler, shadow batting with every cricket bat he could find, trying to polish the rattiest of old two-piece practice balls lying around while his dad Wrighty and older brother Scott were involved in the practice session.

Just before dark, Wrighty helped Mac put on the pads so the little guy could have a hit in the nets. This kid could bat. He had the technique, balance and concentration of a well-coached 15-year-old.

It was the next day at junior training that I saw Mac bowling leggies in the nets. Most kids his age can barely land a leggie, let alone put any revs on it. Mac had no trouble doing both. He was clearly an exceptional talent who loved his cricket.

But Mac did not grow up as a one-dimensional kid. The family is into music and along with his siblings, Mac played in local venues to raise cash for their many interests. Mac sings and plays saxophone, clarinet and snare drums. He played football in winter and got on his surfboard as often as he could and went fishing when the weather and time permitted.

From early on, Mac was regarded as an outstanding opener or number three with very good wrist spin and fielding also in the package. Everyone involved in cricket on the Sapphire Coast also knew that Wright worked incredibly hard at his game, and wondered just how far he would go.

No matter how good you may be in a little pond, you need to cast your line into the sea and try to lure something big, knowing that you might lose your rig.

At 16, Wright took off to the Weston Creek Molonglo Cricket Club in Canberra, about three hours’ drive away, to try his hand. He had great support and encouragement from ACT Comets players at the club and was quickly promoted to first grade.

His performances were good enough for him to crack into the ACT Comets, as a leggie batting down the order. He also had a season playing as the professional for Clontarf CC in Dublin, Ireland, which helped round out his range of experience in playing conditions and boosted his personal development.

Sydney Thunder then picked Wright as the rookie from the ACT in a talent identification program headed by Mark Waugh. Interestingly, Waugh assessed Wright primarily as an early-order batsman who bowled very handy leggies.

At training with Wrighty, Mac had faced over 130,000 balls against flinger and machine, and that will support him well in the years to come.

In 2016, at age 18, he signed a rookie contract with Cricket Tasmania. He was identified in Brisbane, where state talent managers at an elite camp viewed the very best Australia had to offer. But he was chosen as back-up and long-term replacement for current Tassie leg-spinner Cameron Boyce. He moved to Tasmania and set about consolidating his game with a view to making it as far as he could.

He went to Lindisfarne Cricket Club in Hobart and enjoyed the support and encouragement from everyone at what he regards as a great club. He has opened the batting very successfully there, averaging over 50, but in the Futures League/second XI matches he was still playing as a leggie and batting down the order.

I don’t know how frustrated he was with this situation, especially in Tasmania where the wickets tend to be grassy and hard, which is not conducive to spin. If you don’t drop wrist spin on the spot, you get punished.

In October 2019 he grabbed his chance playing in the second XI, when he was pushed up the order to open the innings, ironically against ACT, and helped himself to 173 runs in his only trip to the crease. 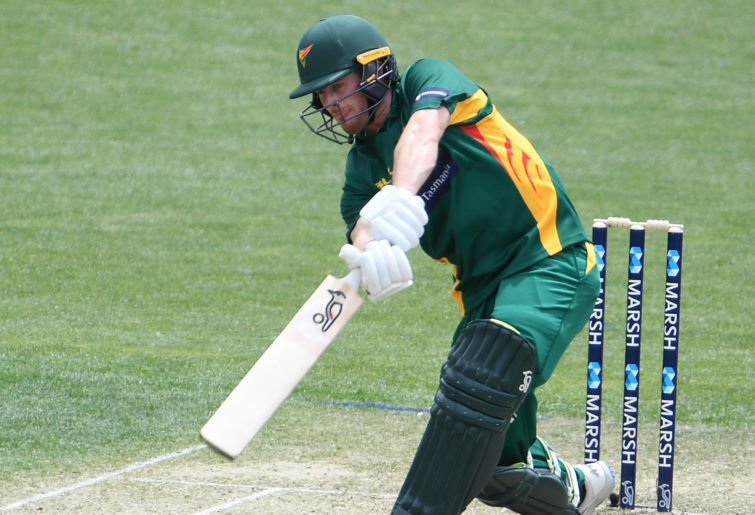 In his List A debut match on 18 November, 2019 he made 46 off 79 in the Marsh Cup against Queensland, pacing his innings and providing the much-needed team glue. It was an impressive start. He batted at four and came in at 2-20 and helped the team post a total in a low-scoring match.

In his second appearance he was awarded man of the match for his 104 off 117 against NSW. Again, he batted at four and walked onto Blundstone Arena with just 11 runs on the board. After a slow and overly cautious start, he timed his acceleration beautifully and then dominated. Either of these efforts would have been worthy of a seasoned veteran, but a rookie?

A breakthrough came in his second BBL innings for the Hurricanes with his 70 off 50 balls, where he opened against Renegades. He also impressed with his second BBL dig batting at three, making 64 from 45 balls against the Thunder.

These batting efforts confirmed that Wright had the highly sought-after abilities of match awareness and being able to perform under pressure. These skills are rare and very difficult to coach, depending instead on an innate cricket brain.

He’s had limited opportunities in white-ball cricket, but when the chances came, he has not just taken them, he’s owned them. His potential as an early-order batsman has finally been realised. Wright’s cricket in the 2019-20 season has taken off and he’s flown out of the leggie pigeonhole to take guard in his proper place as an early-order batsman.

He made the Tassie Shield team at the end of 2019, but his two appearances batting at six and then at three were disappointing and did not yield the success he would have liked, making seven and ten against Queensland and then 20 and eight versus SA. There will be more opportunities, no doubt.

I’m told that he continues to have a great work ethic and I’m not surprised. Wrighty would not expect his son to put in less than 100 per cent, and then some. Wright happily adopted this philosophy and made it his MO from very early on. Along with his cricket career, Wright has taken on a degree course at Deakin University, studying psychology.

Being a contracted rookie gives Wright access to the Tasmanian Tigers’ training facilities and he has worked relentlessly on his strength and fitness. Wright’s output, as measured at Tigers performance assessments, has been exceptional.

But statistics and work ethic don’t tell the whole story. There have been many cricketers with the same talent as Mac Wright as far as athleticism, technique and ball striking are concerned, but not all of them would have Wright’s relentless determination. Even fewer would have the ability to appreciate what’s happening while in the heat of battle and not get carried along by the current or even drown in the whirlpool.

Wright’s upbringing and family support, along with his rounded and grounded approach to life, will give him the best possible foundation for success, and that will be as a batting all-rounder, opening the batting and bowling leggies.

His match awareness, calmness under pressure and particularly his shot selection will set him apart from the rest of Australian cricket’s rookie menu offerings.

Tasmania have only been in the competition since 1977/78, so have the smallest pool of players to choose from for this exercise.