Jake Lloyd
This gut-running, hyper-efficient, rebound-50 machine has quickly become one of Sydney’s most important cogs. Taught from an early age to be a walking, talking, footballing T-1000, he’s a sucker for a premiership, winning four in a row with the Horsham Demons as a teenager. If Sydney are to go within sniffing distance of a flag in the near future, you can bet this man will be a pivotal part of it all.

Dane Rampe
On 3 June, 2017 Alex Honnold made the first free solo ascent of El Capitan, a climb immortalised in film by Jimmy Chin and E Chai Vasarhelyi. Dane Rampe – like any normal person – was inspired. Perhaps too inspired. On May 10, 2019 the Sydney co-captain clambered up a goalpost to – we can only guess here – distract David Myers as he tried to kick a match-winning goal from 65 metres out. 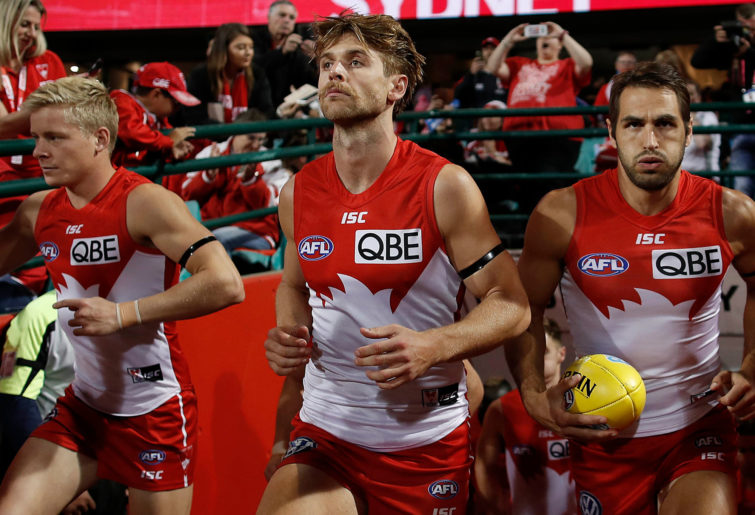 In the same game he told an umpire that they “talked like a little girl”. Media pundits were caught between giggling at the farce and calling for his head on a goalpost. By 2019’s end, he’d won his first Bob Skilton Medal, beating George Hewett by a whopping margin as Sydney’s best and fairest. It was a weird year. Perhaps in 2020, Rampe should stick to doing what he does best: stopping his man, out-marking opposition forwards, and marshalling a promising young defensive squad.

Aliir Aliir
He is is one of Sydney’s more damaging intercept defenders. And a pinch-hitter in the ruck when required. And a game-winning goal-kicker. Not bad for someone who only took up the game as a 16-year-old on the insistence of his high school mates. Annoyingly (to rather untalented lovers of sport like myself), he turned out to be naturally rather good at the sport. Reckon my mates can unlock my hidden talents like that?

Regardless, there’s plenty of forwards in the AFL who wished he’d stuck to the round-ball game he played in his childhood. Or taken up basketball like his cousin Thon Maker. Instead they’re stuck trying to unsuccessfully out-athlete a scarily impressive athlete. Good luck.

Lance Franklin
Sometime in the near future – barring disaster – Lance Franklin will kick his 1000th career goal. At this time, presumably, hordes of fans will storm the field, just like in 2008 for his 100th. The AFL should start making contingency plans now to prepare properly for this event. After all, if I can’t zip-line down from the third tier to join in on the fun, or watch as fragile members launch off the bottom of a second level slip-n-slide, than what’s the point? I want a 1000th goal carnival on the playing surface.

Now, I know that Lance’s body is as fragile as an antique vase at this point in his career, and defenders treat this fragile body with the delicate handling abilities of a dodgy removalist, but he’s within 56. C’mon Buddy. This is the year we lose our collective minds.

End of an era?
In the early 1990s, Sydney were terrible, horrible, no good, and very bad. Gold Coast levels of embarrassment came their way. Seven wins in 1991, three wins in 1992, one win in 1993, and four in 1994. Of course, rather than having their greatest goal-kicker leave like the Suns did with Tom Lynch, the Swans recruited a certain Tony Lockett, the greatest goal-kicker in the history of the VFL/AFL, who booted 110 then 121 goals in his first two seasons. So let’s leave the Gold Coast comparisons there.

Their record since 1994? Twenty finals series made out of 25. Three losing grand finals. Two premierships. The Swans’ crash down the ladder to 15th in 2019 was a bit of a change in scenery. According to some, it was a rebuild on the run. However, we’ve all heard that line before, and to extremely varying degrees of truth. Yet, with Messrs Blakey, Dawson, Hayward, Florent, Heeney, McCartin, Papley and Mills all under the age of 25, there might be life in Sydney yet.