For a sport that is considered Australia’s only truly native game, the AFL certainly has some global ambitions.

In a recent article in the Weekend Australian the GWS Giants outlined an audacious plan to possibly play one fixture in early 2021 in Los Angeles. While the article is big on ambition and light on detail, a spokesperson for the club spoke about “the possibility of taking a game to California” and the AFL itself have said that they are “supportive” of at least the possibility of this venture. Past experience also suggests that both GWS and the AFL are more than willing to chance their arm on such a venture.

While the AFL’s Hollywood script is still very much in its embryonic stages, as an unashamed rugby league expansionist I can’t help but look on with a twinge of envy, because even though there is often talk of the NRL taking a fixture to the USA, I can’t visualise a scenario in which a club and the governing body would be so united in their global ambitions. Perhaps that’s because I’ve seen chances for rugby league in the USA squandered before.

In 2018 promotion company Moore Sports proposed an international Test match between New Zealand and England in Denver, Colorado, during that year’s international round. For multiple reasons the event was an unmitigated disaster, with possibly the determining factor being that from its inception NRL clubs were vehemently against the event and set about drawing doubt as to whether their players would be made available to the point that even a week before kick-off many were unsure if the game would even be played.

What made this worse was the absolute silence from the NRL itself.

So even though the match attracted a crowd of 20,000-plus, the event failed financially, with the promoter eventually going into administration, making the ambition to host the 2025 World Cup in the USA – which was primarily driven by Moore Sports – basically unreachable.

If you look at this in comparison to the AFL’s foray into China, where Port Adelaide now has an annual fixture, the position of the AFL administration is one of total support for what Port Adelaide are endeavouring to achieve. 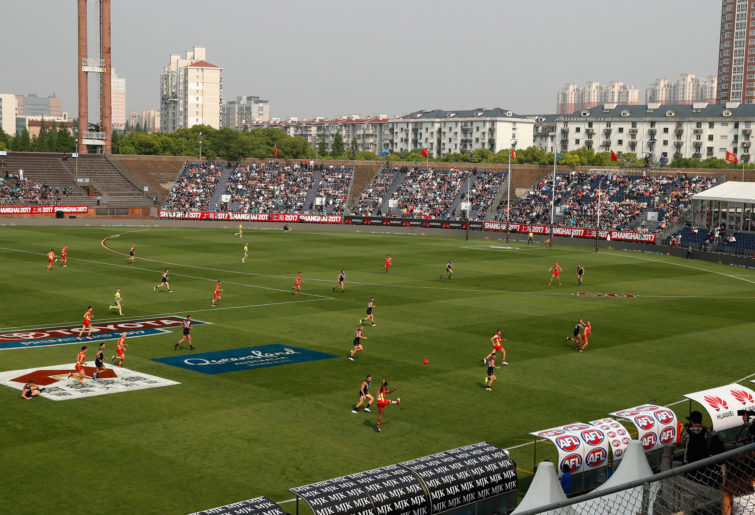 In fact when other clubs questioned the validity of the game or the relatively small crowd was scrutinised – less than half of the rugby league Test in Denver – it was Gil McLachlan who came out in staunch defence of the fixture. So even though the China match between St Kilda and Port Adelaide has issues and opposition, no-one is unsure of the governing body’s position on it.

The AFL has had setbacks in the past when it had tried to expand globally, like St Kilda abandoning their games in New Zealand due to waning interest, and also the league abandoning AFLX, which was stated as its push into global rugby and football markets. Yet these sorts of difficulties are treated as mere bumps in the road as the game strives for a future in which they see a Sherrin kicked around in every corner of the world.

While outside of their respective heartlands both sports are very niche entities, there is still no doubting that a well-attended fixture would do wonders for each code abroad and back home.

Yet while rugby league has some recent capital in North America, with the likes of the Toronto Wolfpack joining the Super League and pro teams to come in New York and Ottawa, plus the USA competing in the last two World Cups, I can’t help but be sceptical if the game is able to get out of its own way long enough to make headway in North America.

The idea of an AFL game in California poses far more questions than answers and has some very real obstacles to overcome before a ball is kicked. Yet the fact that there may not be a suitable venue in the state or only the tiniest percentage of the population are even aware of the sport probably won’t detract GWS from hosting an event there, but it may delay them.

This is where rugby league needs to step up and grow its international appeal. A city like Salt Lake City in Utah with its large Polynesian presence would be primed to host a Test between Pacific heavyweights Samoa and Tonga, and the Rabbitohs and Cowboys playing a season opener in Dallas could cash in on Russell Crowe’s celebrity status and the Cowboys brand.

While not endless, there are opportunities present, and if rugby league won’t take them, we can be sure the AFL will.