Everyone has a slower ball but only a few have the yorker - why?

Walk around your local pub and ask the question: in limited-overs cricket what’s the toughest delivery to score off?

I reckon that the great majority of answers would be ‘the yorker’, and it’s easy to see why. Okay, the 160 kilometres per hour late swinging ball on a length that seams away is harder to score off, but let’s just consider the usual suspects.

Remember, the question is about scoring runs. Let’s also keep the discussion to seamers and quicks.

If you’re willing to accept that the yorker is a reasonable answer, then why isn’t it bowled or attempted for the majority of deliveries mixed up with a variety of other deliveries depending on the bowler’s style to make sure that the batsman doesn’t expect a yorker every ball? Of course the yorker has the benefit of not only being difficult to score off but also threatens your wicket. All very obvious.

So why isn’t it bowled more regularly?

Yes, I know it’s very difficult to bowl, but I’m talking national-level professionals who are specialist white-ball bowlers. These guys have plenty of time to practice it and should be proficient, even under pressure. And please don’t give me the ‘when the ball’s new and hard there’s more potential for wickets and limiting runs by chucking it into the pitch for movement off the seam, letting it swing, surprising the batsmen with bounce’ yadda yadda. I know and agree, but that doesn’t stop the seam up bowler from bowling yorkers more often than they do. The question is about the regularity of the yorker.

Batsmen move around the crease to better handle the yorker, look at the field setting for queues et cetera, but even if the batsman anticipates a yorker, scoring off it regularly is still a bigger ask than for other deliveries. Is the risk not worth the reward in the eyes of the bowler?

The research I’ve done over both ODI and T20 matches would suggest the yorker is used on average less than once an over until around 35th and 13th overs respectively and then climbs steadily but erratically depending on the bowling group of any one team. A Billy Stanlake-type bowler clearly delivers fewer yorkers per over on average.

My statistical sample of 20 overs in each of ODI and T20 may be way too small to get reasonable indicators. Also, influences such as the required run rate, ground size, run chase rate, wicket condition, and batsman skill set all play a part in the bowling strategy and therefore the frequency of yorkers.

When a yorker was attempted but missed the target and went for two runs or more, the next ball was not a yorker in about 80 per cent of instances. Additionally, that next delivery went for more than two runs over 60 per cent of the time. Double penalty. Why, after trying the yorker and getting your range, would you not attempt another one next ball? Perhaps psychologically you don’t want to get it wrong again. Do teams actually use this type of statistic as a guide to what to bowl, or are there more Darren Lehmann and fewer John Buchanans in charge?

For the argument that too many yorkers enables the batsman to anticipate it, I’m not convinced. I give you James Faulkner, who comes on at the death, when everyone knows he’s probably going to bowl five slow balls in the over. Do batsmen set themselves for the slow ball as the normal delivery? No – they keep playing it as the variation to normal. It has always been so. The great exponent of the slower ball, Victorian Ian Harvey, was treated likewise. Why wouldn’t batsmen treat the yorker in the same inexplicable way?

It’s possible that the slower ball tends to work regardless of length, so bowlers opt more for the slow ball than the yorker and it’s easier to bowl.

Doesn’t everyone look at the likes of Lasith Malinga and Peter Siddle and see the yorker’s effectiveness? I can’t read minds and I don’t know what strategy the coaches and captains plan, but surely the use of yorkers is high on the list of weapons in the arsenal.

Perhaps it is just too difficult to bowl, but given the money available for high-impact bowlers, why wouldn’t you spend all day perfecting it?

I’ll leave it up to Roar contributors. My vote is for many more yorkers.

Twenty20 cricket wasn’t always the wildly popular international format it is today. Starting in England in 2003 and beginning internationally for women in 2004 before the Australian men played New Zealand in February of 2005, it took until the 2010s for T20 cricket to really start becoming a staple in the lives of cricket fans […]

So following on from last time’s V team, we come to the highly anticipated W team.

So following on from last time’s T team, we come to the V team. 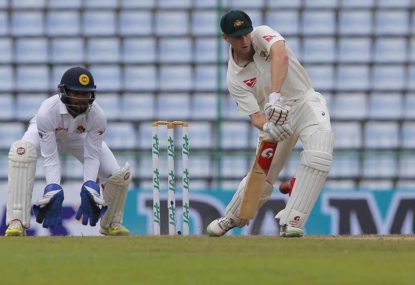