My rugby highlights of 2020 so far

After the exhilarating Springboks victory at the 2019 Rugby World Cup final left armchair connoisseurs with a hangover and severe withdrawal symptoms, Super Rugby and Six Nations rugby has pitched up early to usher in the next four years of the World Cup cycle.

New coaching staff at most outfits and a massive player drain to Japan and the north combined with retiring superstars has shuffled the deck to prepare a smorgasbord of uncertainty, and I’m looking forward to seeing where the chips are going to fall.

The All Blacks promoted Ian Foster to the hot seat and he’s assembled a batch of untested backroom staff at the highest level in an attempt to rejuvenate the team. But I’m not convinced. I think the All Blacks need a complete mind shift and new blood to challenge their established paradigm, which most other nations have caught up. Scott Robertson must be their head coach come Rugby World Cup 2023.

Dave Rennie is the right man for the job in Australia and is set to shake up the Wallabies. I always suspect something special is brewing where there is little talk before the action starts, and his known rugby nous combined with a silent and humble approach bodes well for Australia’s rugby future. Rennie will breathe new life into rugby union in Australia.

Jacques Nienaber has been coaxed from Rassie Erasmus’s shadow to create continuity for the first time ever in the Springboks camp after a Rugby World Cup victory. This is another step in the right direction for South African rugby.

The early days of this Super Rugby season have thrown up four interesting facts.

Firstly, Rassie’s ‘bomb squad’ World Cup-winning plan has become the latest buzzword, with the Stormers, Sharks and Bulls buying in locally. It’s also being trialled by some opposition while in Japan, and the Six Nations teams are testing it as well.

Secondly, Warren Gatland’s return to his old Chiefs stomping ground has had an immediate impact. His accumulated rugby intellectual properties immediately became apparent when he roped in veteran Aaron Cruden and unleashed him after tongue lashing his troops with his first half-time change room session. The Chiefs duly came out and turned a 19-3 deficit into a win and a week later his troops rolled up the Super Rugby 2019 champions, the Crusaders, on their home ground.

This man is a rugby union asset and we are all going to learn a thing or two from him now he’s back in the South. Welcome home, Warren; we missed you. I’m starting to get a bit worried about the 2021 British and Irish Lions coming here.

Thirdly, the renowned South Africa conveyor belt of talent has thrown up another golden nugget to replace the erratic Willie le Roux: young Aphelele Fassi. This young man has gone from strength to strength and it seems 2020 will be his breakthrough after setting stadiums alight this year. Blindingly fast with an eye for a gap, assured under the highball, and hungry with a tireless work ethic, he’s about to shake up the Cheslin Kolbe-Makazole Mapimpi-S’busiso Nkosi-Aphiwe Dyantyi-Le Roux debate in the Bok camp. It’s an embarrassment of riches in the back three leading up to next years Lions tour.

Fourthly, faded superstars are just that: shadows of past and old glories. The massive player drain experienced in South Africa has made most local franchises fall back on old, faded superstars, and it’s backfiring spectacularly. The collective of Morne Steyn, Jannie du Plessis, Josh Strauss, Elandre van den Bergh and JP Pietersen has quite frankly been an embarrassment.

From last year’s Handre Pollard to Francois Steyn this year has destroyed all that the Bulls achieved in 2019, while the exciting Manie Libbok, 12 years younger, collects splinters on the bench. Pote Human is the only experienced South African Super Rugby coach this year, but I suspect his innate conservatism is sinking the Bulls challenge before it’s even started.

In the northern hemisphere the domestic Japanese league has drawn record crowds and produced some scintillating rugby. Japan is knocking the door down to join the top leagues sooner rather than later. Japan has arrived.

Meanwhile, the rumours of the Boks joining the Six Nations are just that: rumours. Our rugby heritage is intertwined with the All Blacks and both parties will resist change that will prevent them from meeting annually.

In the Six Nations Ireland has come out smoking against expectation and they’re gunning for another grand slam. Eddie Jones, meanwhile, has reverted to type, and England would do themselves a favour by replacing him as soon as possible.

The young new-look French team has been a revelation, as I predicted during last year’s World Cup. In young Romain Ntamack they have a real superstar in the making, and he’s leading from the front in a young talented squad. They’re going to be real contenders come Rugby World Cup 2023.

My predictions for the year going forward:

Here’s to a new season of exciting rugbyR I am quietly excited, boys and gorillas.

Quade Cooper’s club v country standoff rumbles on, but Wallabies coach Dave Rennie has given the clearest message yet that he wants his revitalised No.10 on the European leg of the spring tour. 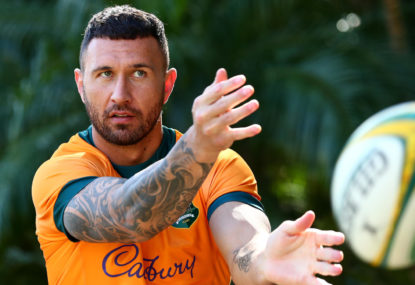 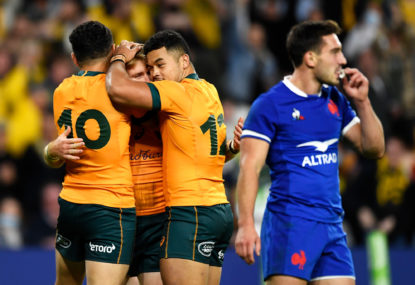 What a kick… it’s only fitting it helped win the match! 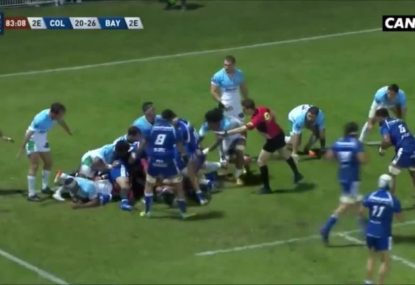 USA Rugby wants to become the first country in North or South America to host the Rugby World Cup, and has launched a bid to stage the tournament, in either 2027 or 2031. Australia, which last hosted in 2003, and Russia, which has never hosted, have already announced they are bidding to stage the 2027 […]