I am a supporter of the AFLW.

Yes, it can be scrappy and low-scoring. What else would you expect from a competition four years old? VFL didn’t fare much better four years into its existence. The score in the grand final four years into the VFL’s existence was Fitzroy 3.12 to Melbourne 4.10.

Give the AFLW time. Right now, we have part-time players. We have players coming across from other sports. We have athletes simply giving it a whirl. But as the game becomes culturally inculcated, girls will pick it up from a younger age. They’ll play the game as teenagers. They’ll come into the AFLW much more accomplished and ready. The game will continue to improve.

If the AFL let it.

Let’s look at the AFL as a competition. It has been going on since 1990. Its predecessors – not just the VFL, but the WAFL, SANFL, etc. – had run about 100 years each. Australian rules is the national sport. Most kids – even those not interested in a professional career – will play a lot of footy as they grow up. Whereas recruitment used to be open slather, there are actual pathways now to becoming a footballer that are closely monitored.

A lot has been going on and is going on to produce a prospect who is of a high standard.

Yet when the AFL introduced two new licences – the Gold Coast Suns and the Greater Western Sydney Giants – they diluted the talent pool. People complained the quality declined. You can see the repercussions. Whereas delisted players were often stigmatised and remained discarded, we now have a lot of recycling going on. Mature-age recruiting is a thing.

These are good things, but I use them to highlight that AFL clubs needed to start considering new alternatives to finding talent, because the pool they’d been drawing on had grown shallow.

And this is in a competition with a long, long history.

The AFLW is four years old and the AFL have already expanded it to 14 clubs. They are hurting clubs who might be trying to develop marquee players, only to see those players join a new franchise. They have diluted the talent pool and spread it thinner because rapid expansionism is the way to grow the game, in the AFL’s opinion.

I understand that they want diverse representation reflective of AFL teams, hoping that will draw on existing allegiances. Unfortunately, if you put aside the irrational complaints – such as why the standard isn’t comparative with the Harlem Globetrotters just yet – fans who don’t want to watch it on the basis of its quality are not going to be won over.

The fixturing is poor also. The season is so short that if a club has a bad start, that’s it, their season is over. This can’t be good for morale. That is also going to negatively impact development. We see AFL teams who flag through poor seasons. It’s not going to be any different in the AFLW. It could, in fact, be worse. The AFL players are professionals. They’re paid well to show up regardless.

Compound all this with inexperienced players being asked to play on open suburban grounds. Aspects of the Collingwood versus West Coast game at Victoria Park last Sunday reminded me of playing footy as a kid – if you kicked against the wind, your kicks were floaters that gained little distance, and it was almost impossible to score. So you just had to hold on until you kicked with the wind, and then it was a rort.

Finally, the AFLW season unfolds over summer. These conditions are the sort I don’t want to see my AFL team competing in. I dread when the AFL has sent Collingwood to West Australia in March to play during the day. In the AFLW, you have players with only four pre-seasons and limited experience under their belts asked to toil in heat and humidity.

If you truly want to grow the AFLW, then it needs to be treated with respect, rather than with this slapdash approach of more is better and everything will be all right. 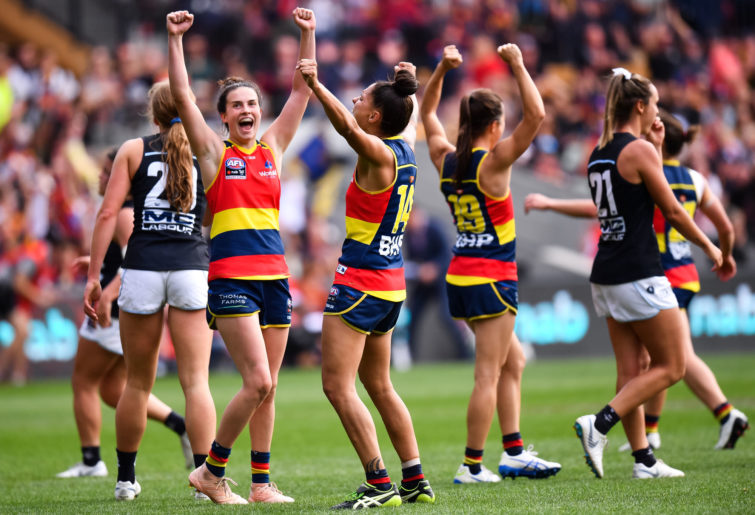 Stop expanding
Fourteen teams is too many, but the AFL won’t go backwards now. But can we stop it here, rather than aim to have 18? Let these players play together, let the clubs develop marquee players, and let these teams forge identities. All this is stuff that’s going to improve the standard.

Play games as curtain-raisers to the AFL
Let the AFLW players play in front of big crowds. Let them play in the conditions that the AFL enjoy. Let them experience Australian rules just as the AFL experience it, rather than this summer oddity.

When I go to AFL games, I usually show up right on the first siren. What incentive is there to show up earlier? The AFL’s attempts at entertainment have become legendary for all the wrong reasons.

The AFLW will fill a niche that’s been empty since the reserves stopped playing curtain raisers.

Modify the rules
Right now, the AFLW players don’t have the skills or power of the AFL players, yet they’re playing by the same rules. The rules might need to be tempered in the short term to compensate for the inexperience of the players. But these rules can be revised as players develop.

Extend the season
I don’t expect the AFLW to last 22 games just yet. But how about – at the least – a 13-game season? You could actually fixture it so that the AFLW played curtain-raisers, but their grand final fell in either the mid-season bye, or the pre-finals bye.

Then develop separation
As the AFLW grows – and it will grow – then you can start separating their fixturing, giving them slots independent of the AFL, but concurrent with the AFL season. An AFLW game could play on a Friday night. There could be an Anzac Day fixture. Critics will shudder. But look at the prospect with vision, rather than judging it in perpetuity by the fledgling standards of today.

I stand to be corrected, but I don’t see that much thought or planning has gone into this competition, other than to have an AFLW, plonk it in the pre-season, and just introduce clubs willy nilly to play off existing allegiances.

And that should work, right? Because everybody loves football. Everybody loves rivalries. The rest will take care of itself. Won’t it?

The AFLW deserves its chance. I just don’t think the AFL are giving it its best chance.