Both teams struggled to create chances and there were only four shots on target in total, with three of those four being goals. There were also only four ‘big chances’ during the match.

For Melbourne City it was because they scored early through Florin Berenguer and made the main focus defending. They will be happy to have shown a clinical ability with their shots to concede only to a sloppy Thomas Glover error.

However, Melbourne Victory should be worried. They scored only from an Ola Toivonen set piece Thomas Glover should have really caught, and they created only one other ‘big chance’ apart from the free kick which led to the goal.

With this article I will show you multiple examples of some Melbourne Victory attacks and goals in recent weeks and together we will figure out what their main strategy is – and how Melbourne City stopped it.

1. Brandon Lauton gets in behind
This wasn’t the clearest-cut of opportunities, but it’s a good example of how Melbourne Victory recycle possession to create goalscoring opportunities. 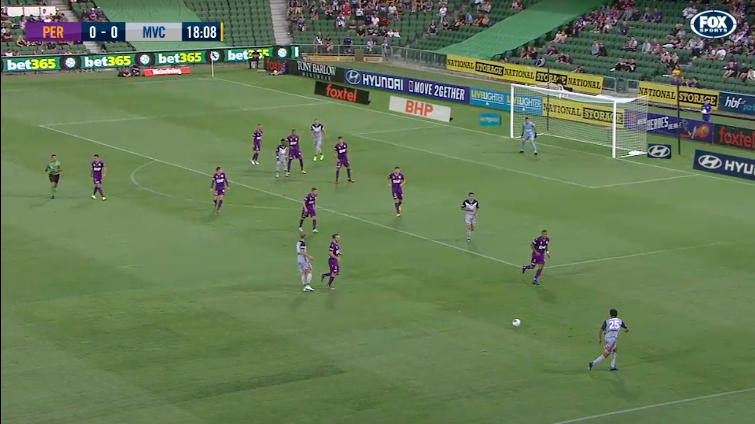 You can see Migjen Basha with the ball on the right side of the pitch. Lauton is making an overlapping run and Basha can play an easy pass through to him, straight away creating a crossing opportunity.

Basha plays that pass and Lauton has space to either cross or plays the ball back. Notice how Lauton engages James Meredith, creating a pocket of space for Andrew Nabbout. 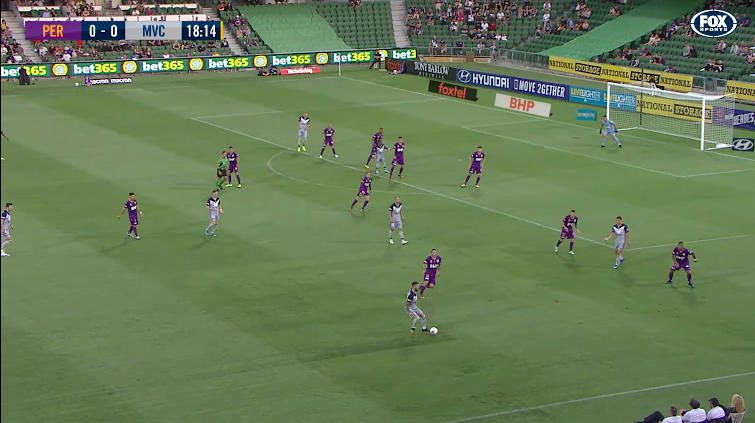 Lauton opts for the safe option and plays the ball back to Storm Roux, who was playing on the right of three centre-backs during this clash. Lauton remains free and yet again engages Meredith. It is currently a three vs three on the wings with Basha as a third option. 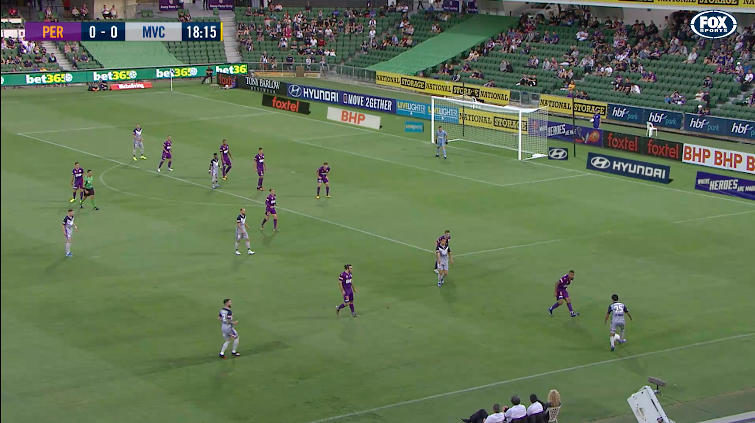 Lauton gets the ball back and you can see how Melbourne Victory have formed multiple triangles on the right of the field. James Meredith and Nick D’Agostino are fully engaged on the ball, meaning Lauton can either play it back to Roux who can recycle the ball or can play a one-two with Nabbout.

Lauton chooses to take the direct option and plays a one-two with Nabbout. He gets in behind and puts in a tame cross that Liam Reddy collects.

It is natural to create from wide areas – it’s where the most space on the field is. I would be crazy to tell you that Melbourne Victory has created a new tactic by playing the ball out wide and putting in a cross, but it’s how they get the ball into the wide positions and what they do when they get it there.

As soon as the ball goes into the wide areas they form multiple triangles and have the option to recycle play, but they play extremely direct at the slightest opportunity because they know if they lose the ball, they can straight away overload the area on the press and either win the ball back or force the ball long.

Yet again, it’s not a new tactic by any means, but it’s a distinctive style of playing, and Melbourne City have found the perfect way to counter it.

But before we look at that, here’s another example of how directly Melbourne Victory plays down the wings and how they create an overload. 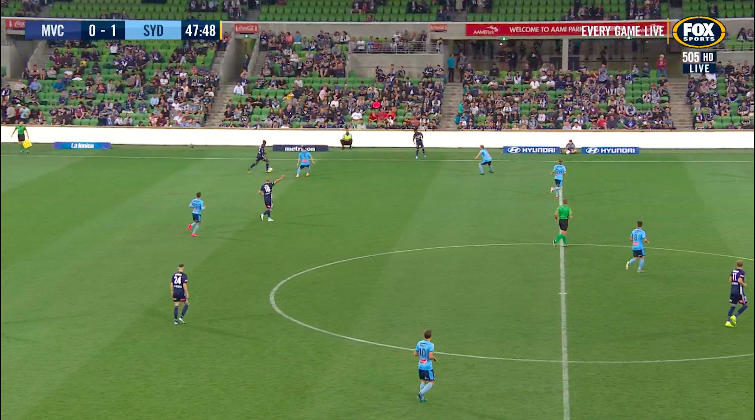 Here Melbourne Victory have won back possession in the defensive line following multiple turnovers in the midfield. Ben Carrigan looks to switch play as soon as possible, knowing an overload can be created on the left as Kosta Barbarouses, Alex Baumjohann and Luke Brattan, the three highest players on the right, have been sucked in, meaning only Rhyan Grant is there to cover on the right.

Adama Traore gets the ball forward and Elvis Kamsoba’s backtracking run attracts the attention of Rhyan Grant, forcing Luke Brattan to cover at right full-back, which creates a pocket of space for Migjen Basha in midfield. 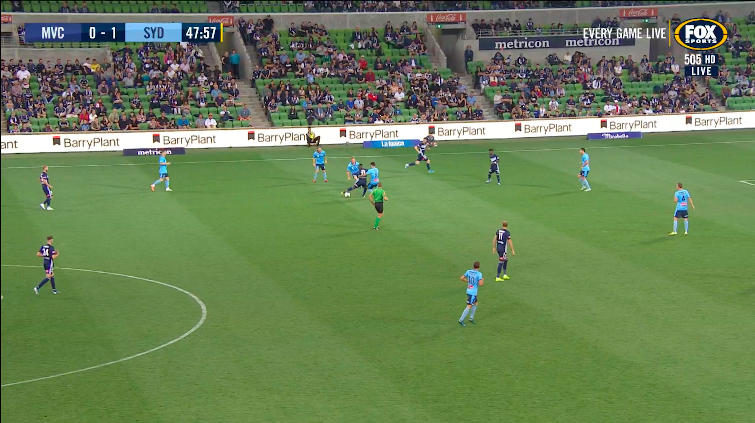 Following interplay from Traore, Basha and Kamsoba, Traore gets the ball in a position where he can look forward. Note how wide Robbie Kruse is on the wing considering he is playing attacking midfield. They have created another overload on the wing as both Grant and Luke Brattan are backtracking, meaning if Traore can get the ball forward, it will be a two vs one of Kamsoba and Kruse vs Dylan McGowan, with Paulo Retre, Brattan and Grant chasing from behind. 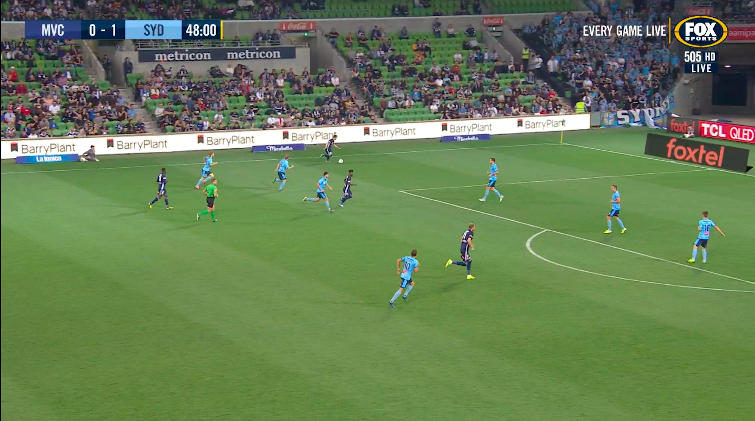 Traore opts to hold onto the ball to suck in all three of Sydney’s players while the defensive line back-tracked, creating a pocket of space for Kruse on the left.

Kruse gets the ball while Brattan, Grant and Retre are chasing back, leaving essentially a back two of Alex Wilkinson and Joel King, as McGowan gets sucked into a duel against Robbie Kruse.

You see Toivonen’s position in this image, which shows how he makes a late run into the box and outpaces the back-tracking Milos Ninkovic, who was his temporary marker. Toivonen makes a clever run behind Joel King, the widest of the back two, and has a tap-in header, which he blazes over the bar.

Yet again we see how Melbourne Victory’s style is to get one of their wingers or fullbacks in behind, arrive late into the box and one by one pick players out of their position.

If you scroll up to the first image again, you can see that Brattan and Retre are both in position, but by the last image they are both chasing the ball.

Here’s an example of what Melbourne City did to mummify Melbourne Victory’s main attacking strength and tactic. 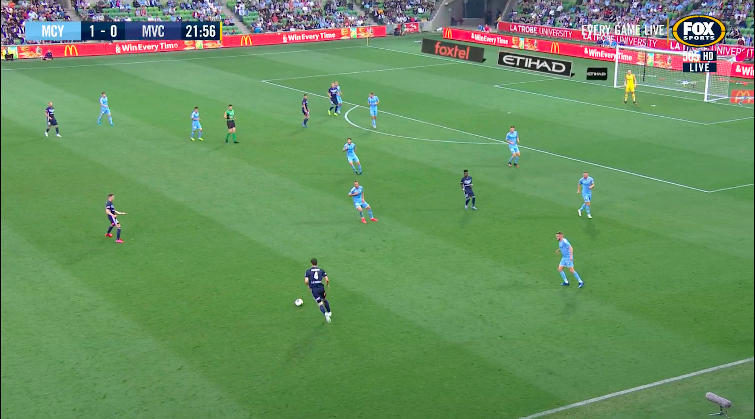 Here James Donachie has the ball after advancing into Melbourne Victory’s half.

First of all, we need to look at Melbourne City’s structure in defence.

You can see that they are playing a 4-1-4-1 formation, with Jamie Maclaren the only player out of frame in this photo.

Melbourne City is playing very deep in defence, but Migjen Basha is marked closely by Markel Susaeta. This is because that he is more creative of the two midfielders, with the other one being Anthony Lesiotis, and City knows that Lesiotis won’t be much of a threat on the ball in a deep position and most likely will recycle play. 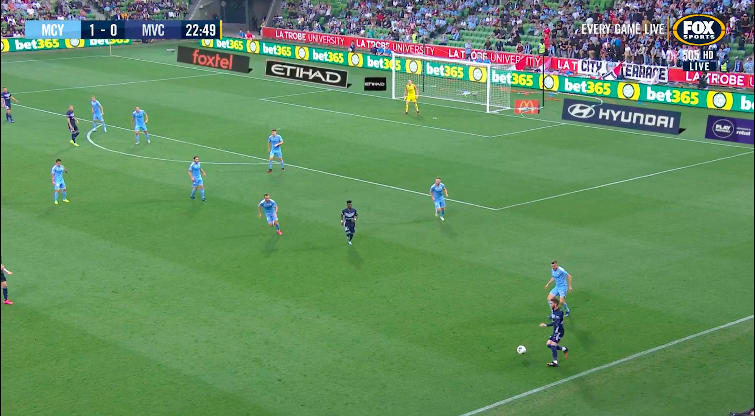 After passes between Lesiotis and James Donachie, Roux gets the ball out wide in Melbourne Victory’s favoured position as they look to get the ball in behind.

Craig Noone has remained defensive, putting pressure on the ball, while Florin Berenguer is already closing in on Lesiotis, which would force a ball back unless Lesiotis was to take on Berenguer and beat him, something that would be unwise that deep in the field.

One main thing here, although it may be simple, is that Melbourne City wasn’t focusing on the ball. They were staying with their man and keeping their shape to great effect, something that has lacked this season.

Erick Mombaerts stated after the game that he likes his team to play attacking football and knew that they played quite defensive that game, but they countered Melbourne Victory’s style perfectly, and they may have just supplied the blueprint of how to counter Melbourne Victory.

Brisbane have returned to the scrapping pack around the edge of the A-League top six, but coach Robbie Fowler says their finals destiny remains firmly in their own hands.