In December last year when the Sydney Thunder WBBL team concluded their campaign with a loss to the Melbourne Renegades, cricket fans knew they were saying farewell to one legend of the game in Alex Blackwell.

Her long-time friend and teammate Rene Farrell has also, very quietly, announced her retirement too and was taken through the guard of honour by Blackwell. But why was the announcement so quiet?

“I didn’t want to take it away from Alex. I wanted to show her the respect she deserved.” said Farrell.

“She has been a champion of the game. I told her about my retirement the night before, and in true Alex Blackwell style she dragged me through the guard of honour and made me cry on television.”

Despite Farrell announcing her retirement, it wasn’t effective immediately with Farrell committing to playing one more season with the NSW Breakers in the WNCL.

This Sunday will be her final game in the sky blue when the Breakers play Western Australia in the WNCL final. Incredibly, the Breakers will be looking to secure their 21st WNCL title in 24 years of the existence of the competition.

At the start of the season, Farrell thought that reaching the final may have been a bridge too far for a team that has been in a rebuilding phase this year. Several experienced players have moved on including Ellyse Perry, Nicola Carey and Maisy Gibson and there have been several debutants this year including Hannah Darlington, Hayley Silver-Holmes, Phoebe Litchfield and Stella Campbell.

“At the start of the season, with such a young team, I didn’t think that we would get to the final, let alone a home final, so I am really excited about that opportunity,” says Farrell.

“Hopefully we can get that fairy tale ending that every cricketer dreams about for their final game.”

Farrell will finish her career having represented Australia in a total of 101 matches. Some of her fondest memories came during this time, including her Ashes hat trick in 2011 and being part of the Aussie squad that went unbeaten in the 2010 World Twenty20 in the West Indies.

She was also part of the Sydney Thunder’s inaugural WBBL squad that won the title in 2016 and has also played over 80 games for the NSW Breakers. 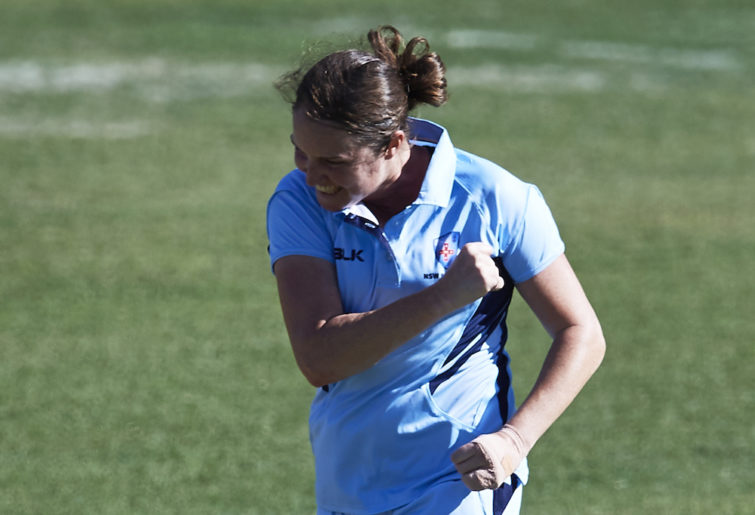 Rene Farrell wants to go out on a high. (Photo by Brett Hemmings/Getty Images)

But Farrell has been part of cricket during a period where the women’s game has undergone significant change.

“When I started playing in high school, there was a time when we were wearing long socks and culottes. I remember the grazed and sunburnt knees because we didn’t wear pants,” says Farrell.

When Farrell first began playing for NSW, the team only trained one or two nights a week from 6-8pm in the evenings because the women in the squad were studying, working or doing both while they played cricket.

“It has completely changed now and I’m excited to see how much further it will go. I know my skin folds have gone down massively since we started training full time,” says Farrell.

“The strength of the women playing the game is vastly different to when I was coming through and you can see it in their fitness levels, the way they strike the ball and the pace of the bowling. Tayla Vlaeminck can bowl up to that 120-kilometre-per-hour mark, who knows how much further she can go.

“Stella Campbell is the same and she has the height too, which scares me. I ask not to face her in the nets. I think I’m getting out at a good time so I can protect my body, if anything!”

Farrell credits much of the growth in women’s cricket to the efforts of Cricket Australia, but also to Cricket NSW. The NSW Breakers were Australia’s first professional domestic sporting team, thanks to the support of Lendlease. For Farrell, Cricket NSW has always been at the forefront of promoting the women’s game.

“I’m so proud to end my career at Cricket NSW. I have been around to a few states and they have all been great, but by far Cricket NSW is the most professional and the support the players get is the best in the game that I have seen,” says Farrell.

It’s because of this professionalism and the opportunities available for young women to play cricket that the likes of players like Litchfield, Darlington, Campbell and Darke have been able to develop.

“For these young women coming into the WNCL, they have had the chance to gain experience in the Big Bash alongside Aussie players and international players, so it is not as big a step up anymore. Training full time also helps,” says Farrell.

But for the moment, the focus is squarely on this weekend’s game and hopefully one more win for the Breakers.

Behind her, Farrell leaves a legacy of a fierce competitor, a woman who was part of cricket during a seismic shift and a character that brought plenty of joy for her teammates and to cricket fans across the globe.

What’s next for Farrell?

“Getting my body right and doing some travel to parts of the world that I haven’t got the chance to see because of cricket,” she says.

“Oh, and keeping an eye on those skin folds now that I won’t be training full time anymore”.