Largely unheralded by the press during his rugby career but highly valued by his teammates, Australian Schoolboy, Queensland and Queensland Country representative and Wallabies lock Shane Nightingale passed peacefully on Monday night after a five-plus-year battle with pancreatic cancer.

My teammates and I were fortunate to have played rugby with Shane in the 1977 Australian Schoolboys Invincibles team that toured the UK, playing and winning all 16 games, scoring 110 tries to six.

On rugby tours you get to know who you can rely on when the chips are down. And while praise is often offered to backs and back-rowers, you don’t often hear too much about the tight forwards.

We were blessed on that tour to have young tough men of calibre in that department – not least among them, Shane.

I remember on the 1977 Schoolboys tour when we played one of our toughest opponents, past and present players of Sevenoaks rugby school in England. The game was in the balance and we could easily have lost the match, which would have derailed our tour goal of returning home undefeated. The opposition was crowding our illustrious back line, which was not used to being suffocated and could not find a way through.

It was decided that the tight forwards would truck the ball up and force the opposition to retreat thereby giving our backs the room to do their magic. And away they went with Shane leading the charge, allowing us to run in two tries and win 14-6. 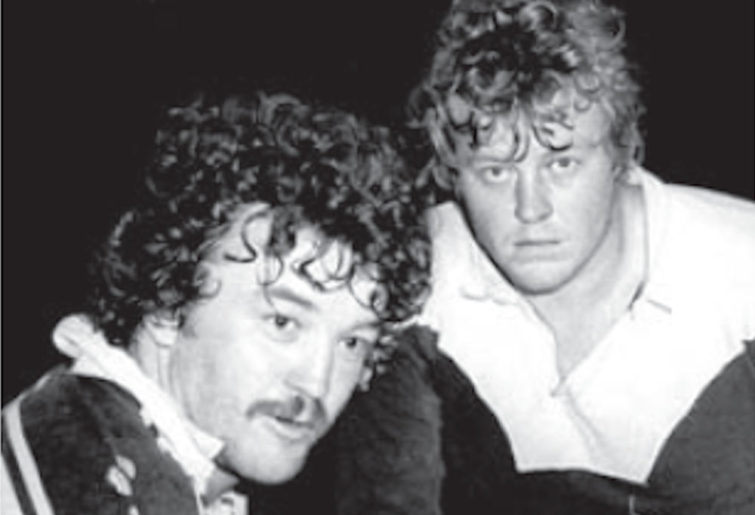 It should also be mentioned that while the team scored 110 tries in 16 matches, which is quite remarkable, only six tries were scored against us, so some-one must have been doing the tackling. And while I do not want to disparage my illustrious brothers in the back line, I think I can say with some accuracy that the forwards had a lot to do with that statistic – and Shane can again take a bow.

After school, Shane played rugby for his beloved Brothers Rugby Club, well known for their fierce and uncompromising style of play. I can attest to this having been on the receiving end of thousands of sprig marks from the boots of their forward pack – again, Shane, take a bow.

In 1979 Shane played lock for Brothers with his brother Mark in the back row in the epic Brisbane first-grade club final series against Queensland University.

Two grand finals were played with 20 minutes extra time having to be played in the first game only to see the result a locked at 24-24.

In the second grand final replay, the scores were locked at 13-13. And in extra time, Brothers kicked a penalty goal to win the match 16-13.

At club level, Shane won five premier grade titles with Brothers (1980-84). Not many people have won one, let alone five. He was also awarded the JP Gralton Memorial Trophy for the most resilient player at Brothers Rugby Club. He and his brother Mark are only one of two sets of brothers to each play over 100 first-grade games for their club.

Shane went on to play for Queensland and the Wallabies. In 1982 I had the privilege of touring with him on the Wallabies tour to New Zealand. The Wallabies won ten of the 14 matches and lost four. The international match series against the All Blacks resulted in a 2-1 win for New Zealand, who won the first and third matches, with Australia winning the second match.

Shane has had a memorable rugby career with many golden moments. But the memories I will always treasure is of a quiet man who was humble, fiercely loyal, uncompromising and reliable, with a cheeky grin and a twinkle in his eyes.

On behalf of all of those of us who have had the privilege of playing with and against you, we salute you and say farewell.

I hope to see you in Valhalla.

Shane’s funeral is on Friday 14 February at 10.30am at Our Lady Help of Christians Church, Hendra, Brisbane with the wake at Brothers Rugby Football Club.