New coach Carl Robinson is determined to stamp out the Newcastle Jets’ alarming habit of conceding goals early in a half, after praising their fightback in his first A-League game in charge.

The Jets conceded a fifth-minute goal in Saturday’s game away to Western Sydney and were under the cosh in the early stages, but dominated most of the rest of the match and earned a 1-1 draw.

The point was enough to lift them off the bottom of the ladder, above local rivals Central Coast.

The early penalty, converted by Wanderers captain Mitchell Duke, was the 11th time in 17 games this season the Jets have given up a goal in the first 15 minutes of a half.

“I’ve watched a number of games and conceding goals in the first ten,15 minutes of the first half or the second and it’s not a good habit,” Robinson said.

“We’ve got to try and eradicate that pretty quickly.”

Newcastle manufactured plenty of opportunities on Saturday, as they have in several other games, but have scored only 18 goals, the equal second-lowest tally in the competition.

“We created a number of chances today and we only scored one goal, so we’ve got some work to do in that,” Robinson said.

“Bringing (recent signing) Roy (O’Donovan) back in, getting (Abdiel) Arroyo fit and up to speed.”

He was pleased with the way his squad responded to his instructions.

“You put demands on players, players either go under or they stand up and perform,” he said.

“I put demands on them this week, it wasn’t an easy week, their legs felt a little bit heavy.”

Robinson is wary of trying to cram too much information into his players in a short space of time.

“I’ve got to pick and choose what I decide to implement in the training week, because if you try and give them too much it’s overload,” Robinson said.

“I want (midfielders) Dimi (Petratos), Steve (Ugarkovic), Angus (Thurgate) to get on the ball and play with freedom.

“But they’ve also got to realise they’ve got some  roles and responsibilities in the defensive side of the game when you’re out of possession.”

Robinson hoped to have Wes Hoolahan ready to play his first A-League game either next week or the week after, with the Irishman sidelined since he suffered a serious ankle injury in an FFA Cup quarter-final last September.

Newcastle’s interim coach Craig Deans says he can see light at the end of the tunnel for the club following the implementation of new temporary ownership by A-League investors.

Loyalty to some is merely a seven-letter word. A word that means nothing. To the hard-nosed football fan, loyalty means everything. 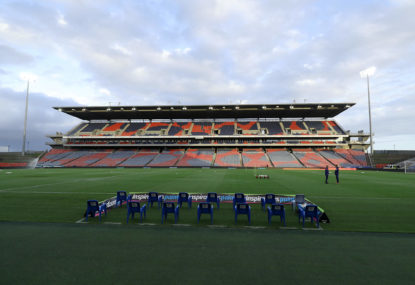 The ‘unbundling’ of Australian soccer is finally complete, with Australian Professional Leagues to take over the running of the A-League and W-League.