But this is not the only area of risk. We need to look beyond the fence to see another potential for injury. Never in cricket’s history has a cricket ball travelled so often and so quickly over the cricket fences of the world in all forms of the game.

The power of the modern bat provides players with the ability to clear the fence on a miss-hit. A timed shot hitting the sweet spot and swung with reasonable bat speed results in a carry of 90 metres or more.

But perhaps the long, high six is not the worst-case scenario. The flat-batted shot, on the full or on the bounce, enters the crowd at significant velocity and is potentially more dangerous. Therefore, we need to add some flat-batted boundary fours into the risk assessment.

The BBL averages about ten sixes per match – potentially ten opportunities for someone in the crowd to be injured. Add say another three flat-batted fours hurdling the fence and we get unlucky 13 every T20 match. 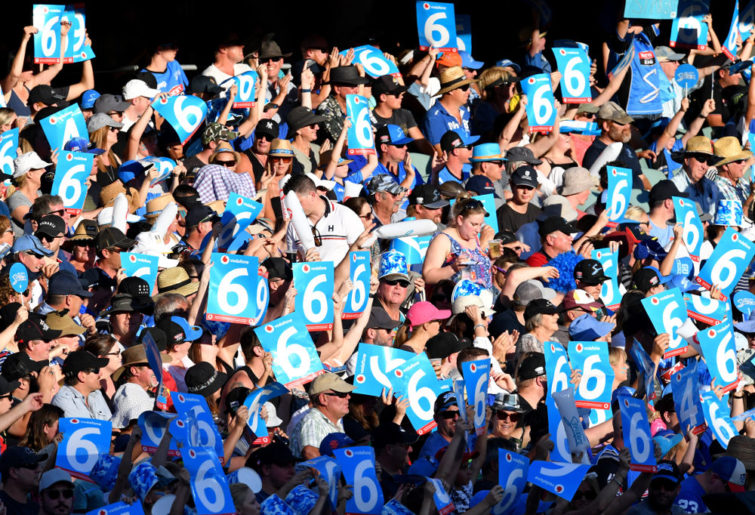 With all risks, the likelihood of the disaster scenario will start reaching the odds of a dead certainty as the number of instances increases. At some time in the foreseeable future, someone in the crowd will be taking a trip to hospital rather than going home with friends after the match.

What’s this scenario? The most likely vision, which will come with a graphic viewing warning, will occur in the first five or six rows from the fence, when the ball is coming in flat and fast.

Most of those in the danger zone will see it coming and because it has become a symbol of Australian masculinity to catch one of these missiles regardless of where you are positioned, about ten people will be moving towards the line of flight.

What could possibly go wrong? The over-eager, marginally athletic and intoxicated 40-year-old dives from four seats away only to get a finger on the ball.

Unfortunately, this is the fickle finger of fate for the ten-year-old girl who has overestimated her ability but has lined up the catch well.

The finger deflection means that instead of her hands, the ball strikes her and injures her. Use your imagination to create your very own horror story.

Perhaps the story is of the 70-year-old pensioner who is looking up at the screen at the time and doesn’t see anything coming, including the ambulance.

Am I exaggerating things? I hope so, but I’m sure that these scenarios or something similar will happen.

In baseball there are nets behind the batter to stop the hard-hit fly foul from hitting those most vulnerable patrons. Why aren’t nets provided at the fence line for cricket? Surely that’s not too much to ask.

Doesn’t the venue owner have a duty of care to provide as safe an environment as reasonably practicable? Having a net at the fence would be a reasonable and obvious safety precaution given the repeated evidence of the ball being hit directly at patrons.

The net may not be high enough to collect everything, but a high percentage of balls would be stopped.

Can we please have something done before we have an accident?