This Saturday at Cbus Super Stadium on the Gold Coast, the NRL will feature another edition of the All Stars match when the Indigenous All Stars take on the Maori All Stars, returning to the ground where the modern concept began in 2010.

It’s the second year the two teams will be competing against each other, although they’ve met at various times in the past under different formats, with the Maori All Stars looking for revenge after losing to the Indigenous side last year in Melbourne 34-14.

Each year, unfortunately, a lot of people get caught up in the politics and debate of issues that the All Stars game bring up, but for those that think it’s nothing but a glorified trial game, it’s a lot more than that.

I was raised by my great grandmother, a Wiradjuri elder and Aboriginal activist, and grew up in Wellington, New South Wales, a town with a rich Indigenous history and a strong connection to the Wiradjuri nation.

What the All Stars game represents to me is a showcase of that tribe and the many different countries that make up Aboriginal Australia. It’s an opportunity to celebrate the culture, the land, the language, the diversity of the traditional custodians, while also promoting positive initiatives such as Deadly Choices.

The Indigenous All Stars is a continuation of a legacy that dates back to 1973 when the first Australian Aboriginal team formed and won seven of nine matches in ten days, but it goes back even before that with the long history of the Redfern All Blacks.

Wearing the Indigenous jersey is more than wearing a strip for a modern concept, it’s wearing a symbol of pride and acknowledging the history that Aboriginal men and women have contributed to rugby league throughout the decades. It’s also representing one of the oldest continuous cultures. 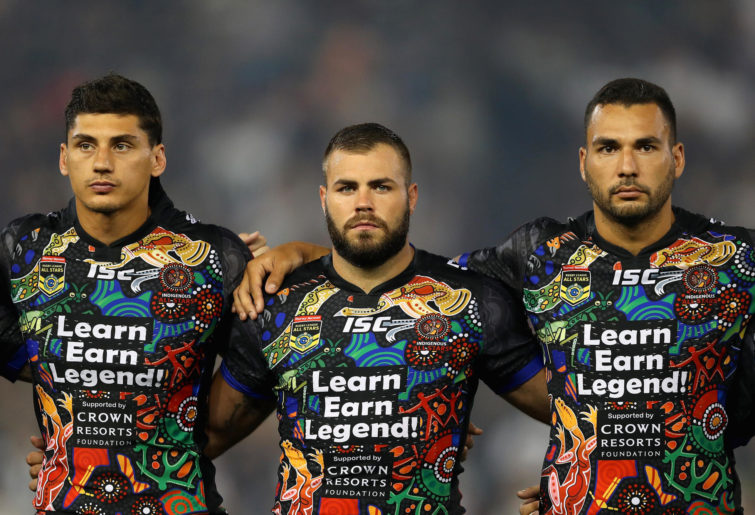 It’s celebrating the greats such as Arthur Beetson and Johnathan Thurston, players like Matty Bowen, John ‘Chicka’ Ferguson, David Peachey and Preston Campbell, the man responsible for the revival of the side, among many more. It’s also showing appreciation to the lesser known names.

Those that have dedicated their lives to country rugby league, like my great uncle, who was the chairman of the Wellington Cowboys up until his death. It’s a thank you to all in administration that go out of their way to make the Koori Knockout and the Murri Carnival a success. It’s a thank you to the nurses, the doctors and everyone involved in the Aboriginal medical centres that continue to work on improving the overall health of our people.

Most importantly it’s a game of hope. For some of the players in the line-up this Saturday, their paths in life could’ve gone very differently. Rugby league gave them a way to escape the negativity that can come from small town Australia and because of that, these players have become role models and examples to other Indigenous kids that aspire to play in the NRL.

I remember myself being a kid in Wellington with the dream of being like Preston Campbell, but the dream seemed too impossible, something I could never achieve. Now there are kids growing up in the same town, and despite the issues that plague it, there’s a real sense of hope because they’ve seen people like Blake Ferguson, Brent Naden and Kotoni Staggs set their minds towards a goal and work hard to achieve it. They prove that the dream is possible.

Many people in Wellington will be tuning in and cheering on their hometown hero, Blake Ferguson, but also Tyrone Peachey, Josh Addo-Carr and Jack Wighton, three men that have strong ties to the town. The game itself should be once again an exciting, fast-paced battle with an emphasis on attacking footy, which highlights the natural ability of the Indigenous and Maori talent.

At the end of the day, though, it doesn’t necessarily matter who wins. Both sides will give it their all, but the immense respect that will be shown by the two cultures is what makes it worthwhile. The coming together of Maori and First Nations Australia and the positivity that will be taken into the communities in the lead-up to game is a reason why it’s an important date on the calendar.

I’ll be tuning in on Saturday wearing my Deadly Choice Indigenous jersey, taking a moment to be thankful to the medical services that have helped me with my health. I’ll take a moment to think about my great grandmother, an Indigenous elder that raised me as a child when nobody else would. I’ll think about my roots to Wiradjuri and my family and elders that have paved the way for me to be where I am now.

It’s more than a pre-season trial game for me. It’s a game that pays respect to a part of me that might seem little to some, but is a big part of my identity.