Harris’ coach Daniel Harford said Livingstone’s claim was “borderline garbage”, an intriguing assessment that had many wanting to have a look at his map.

An anonymous former AFLW coach mused, “It was probably an overreach by Livingstone”. And a forensic analysis by The Age revealed that yes, indeed, although Harris is less effective on the ground than in the air, she definitely has more than one dimension to her game and so the “useless” claim was factually incorrect.

Phew! Glad we got that cleared up! It would be scandalous, would it not, to allow an overreach to go uncorrected? And we must remember that borderline garbage is a gateway to… garbage.

On the other hand, it might be said that actually arguing about Harris’ ground-level capabilities in response to Livingstone’s sledge is, not to put too fine a point on it, stupid.

For the love of Barassi, can we just enjoy a nice nasty bit of trash talk without analysing it? Livingstone wasn’t making a measured critique of Harris’ weaknesses: she was slagging her off, and doing it with exquisite timing, right after her Pies had smacked Harris’ Blues. What can you do in the face of that kind of slam dunk? Nothing but seethe and plot your revenge the next time she plays on you.

Of course, Harris tried to make a more immediate response, tweeting an image captioned “A lion never loses sleep over the opinions of sheep”, which is a terrible comeback. Firstly because if you weren’t worried about the sheep’s opinion, you wouldn’t bother tweeting about how unworried you are, and secondly because she beat you, both on the ground and in the post-game verbal volleys. 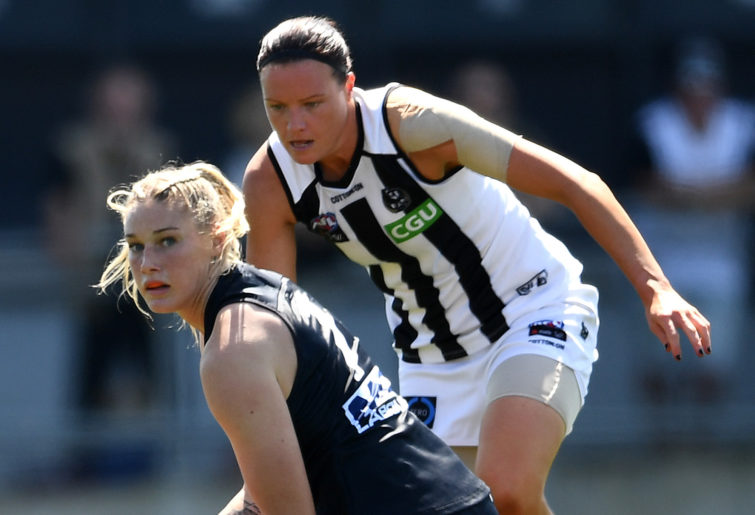 And frankly, it was great for the game. With the AFLW going from strength to strength and new fans jumping on board every day, what better way to show that the women’s game is the real thing than by demonstrating that female footballers can lay the verbal smackdown just as viciously as their male counterparts?

On a fundamental level, it’s good for the game purely for the publicity value. Livingstone’s sniping generated a series of articles on the rights and wrongs, including the aforementioned statistical dissection, which as stupid and pointless as it was, still gave column inches to the AFLW. But the nature of the publicity was superb, too.

It was in a similar vein to the story of Richmond’s Katie Brennan targeting the injured shoulder of Gold Coast’s Jamie Stanton: plenty of tut-tutting and lively debate about whether it was poor sportsmanship or not, but the main thing was that it sent a message that this is what happens in AFLW.

And that’s just as it should be. Not that footballers shouldn’t have a comradely attitude to each other and carry a sense of community across club lines. But you never want to think that your team, when it runs onto the field, is above getting a little down and dirty if the need arises. You don’t want your footy to be polite.

You want two teams going at each other like angry badgers, and throwing the odd sledge into the bargain.

As professionalism in the women’s game keeps ticking upward, as players get faster, stronger and more skilful, it’s fantastic to see that they’re also getting just a little bit meaner.

There’s always a limit to how attitude is too much, but right now it’s an absolute delight to see the stars of the AFLW baring their teeth, and sinking them into each other.