Moments can define careers; moments of brilliance, pain, achieving the seemingly impossible on the biggest stages.

While these might make spectacular highlight reels, to define players by a single moment does them a disservice. Their battered bodies are testament to what they have given to the game.

This rings especially true for Benji Marshall, whose career has been defined and redefined, outlasting all expectations, perhaps even his own.

While that pass to Richards might have inspired a generation of young playmakers, his game has evolved and matured as he has.

For every Marshall, Sonny Bill Williams, Shaun Johnson or Roger Tuivasa-Sheck, there are scores of gifted Maori and Polynesian kids practising their side steps, no-look passes and outrageous dummies.

While New Zealand has plenty of natural talent, there has always been a suspicion in Australia that Kiwi systems don’t foster the necessary mental toughness to make it in the NRL. Those Kiwi kids would do well to look more closely at Marshall’s career, past that moment of brilliance in the 2005 grand final.

Benji’s body has creaked and groaned. His list of injuries is painful reading – repeated shoulder dislocations and fractures.

As one of the smaller players, he is a defensive target and could have been excused for giving up and selling real estate. But he continued to side step, stutter step, goose step, foxtrot, moonwalk, line-dance and ghost his way through defences.

And he added new responsibilities to steer his side around the park and control games, helping guide the Kiwis to the Rugby League World Cup title and captaining them when they won the 2010 Four Nations, scoring two tries in a match-winning performance that also earned him the Golden Boot for international footballer of the year.

His transition from instinctive ball runner to on-field general has been remarkable. It is not easy to let go of those impulses – Johnson could testify to this.

Marshall could have given up after an unsuccessful foray with the Blues Super Rugby. He would have had more chance of success had he been asked to steer the Titanic after it hit the iceberg.

But he wasn’t done. Marshall returned to the NRL, securing contracts with St George and then the Broncos as a senior player, a mentor to their young halves. From leading man to a bit part. 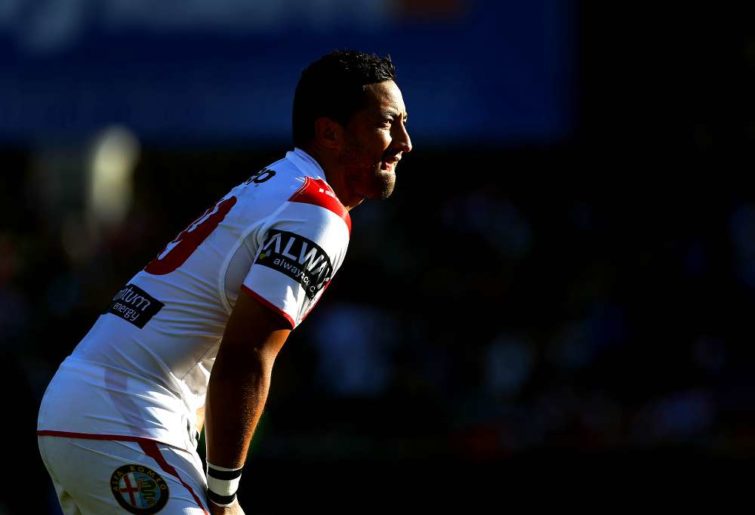 Benji Marshall in his Dragons days (by Robb Cox ©nrlphotos.com)

Finally, he has returned to his beloved Tigers, where it all began. A completely different role to the flashy ball-player who first pulled on the jersey, his form left Michael Maguire little choice but to select him; even earning a call up to the Kiwis.

Marshall speaks with maturity, with mana. Hopefully league administrators and powerbrokers are listening. With increasing numbers of Maori and Polynesian players, the game needs more voices like his.