‘Ted’ was never afraid to jettison the most painstakingly detailed game-plan if the weather made it impossible to execute.

Extreme weather demands a unique type of rugby, a style alien to the perfect platform provided by contemporary enclosed stadia and billiard-table pitches.

England and Scotland discovered that in the storm-ridden conditions at Murrayfield last weekend. The driving wind and rain were so violent that neither side were able to play a constructive game of rugby at all.

At one point in the second period, the normally accurate England kickers booted the ball straight out over the touchline on three consecutive occasions. It was a miserable afternoon for aficionados of the beautiful game.

The Rebels and the Waratahs discovered something similar in their clash at AAMI Park on Friday evening. Unfortunately for the sky blue faithful, the Rebels found out what was required much quicker than the men from New South Wales, and they came away with a valuable 24-10 win. 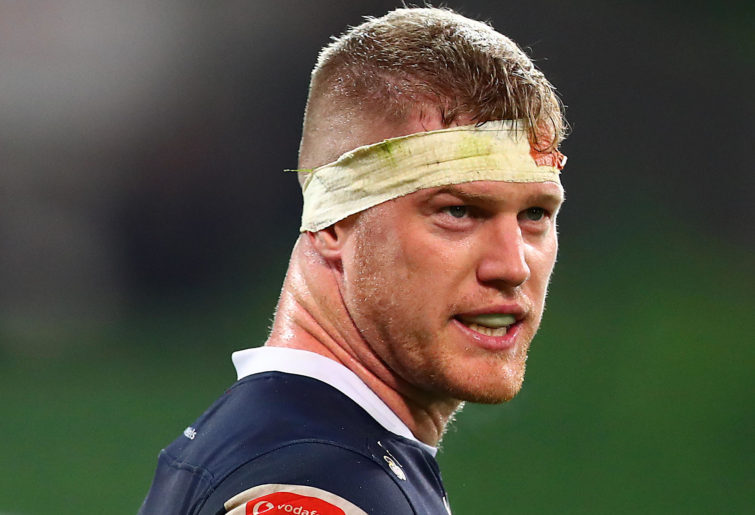 What are the requirements for wet weather rugby? Firstly, there has to be a recognition that handling and moving will be more difficult than usual. Conditions underfoot are more treacherous, so quick changes of direction are ruled out and the number of moves conducted at top speed are dramatically reduced.

There are fewer passes and more kicks made – the pass-to-kick ratio was only 2.4:1 in the Rebels-Tahs encounter. Compare that to the 7.5:1 ratio in the wide-open game between the Sunwolves and the Chiefs, played in the dry of Tokyo less than 24 hours later.

There is a premium on keeping the ball efficiently. The Rebels enjoyed a 100 per cent retention rate over 73 rucks, and that in turn helped them win the penalty count – five conceded to 11 awarded.

Likewise, you want to make the most out of those no-pass situations. While Melbourne drove the ball on from six of their 14 lineouts, the Waratahs drove none of their own 17. The lineout became an important platform for attack for the men from Victoria as the match wore on.

Above all, you need excellent direction and management from the spinal column of your team – at numbers 8, 9, 10 and 15. The Rebels in these positions (Isi Naisarani, Ryan Louwrens, Matt Toomua and Dane Haylett-Petty) all won their individual battles, with clear performance daylight showing between them and their opposite numbers.

Let’s narrow the focus by looking at the battle of the scrumhalves, Louwrens and Jake Gordon. Louwrens has been unlucky with long-term injuries in recent seasons, but he arrived match-fit in Melbourne at the end of January after playing a full season with the Kintetsu Liners in Japan.

“At first I was sceptical about it [back-to-back seasons] but then I was excited to see how my body would handle it,” Louwrens told the Sydney Morning Herald

“I’m match fit. We just finished our season in Japan so that helps. You stay game ready and hopefully that helps the team too.”

“I just like to bring physicality and run with the ball.

“I’m a running halfback and if conditions stay as is then we can run the ball, play up-tempo rugby and hopefully that contributes to the team.”

The up-tempo aspect had to be shaped to the conditions, as Louwrens realised the ability of the scrumhalf to run the short side would be a key element in that battle.

The first hint of what was to come occurred right at the start of the game:

Like any South African halfback worth his salt, Louwrens first looks at the Waratahs’ short-side defence as he approaches the base of the ruck. Although they are numbered up, there is a mismatch between wing Marika Koroibete and New South Wales hooker Robbie Abel which can be exposed with just one short, minimum-risk pass.

Why use the narrow side in bad weather? Passes are shorter because the attack is more compressed, and there are plenty of forwards regrouping from the nearby ruck to cover a mistake. The defensive rush which tends to be triggered when there is a big open side of the field is defused.

Louwrens went to work on the short side from attacking scrums:

The Waratahs’ defence of the narrow side was ragged from start to finish, and in the second of those two instances, Louwrens was away and running before Jed Holloway had even pulled his head out of the scrum. Michael Hooper was forced to make the tackle, circling around from the other side of the set-piece.

As the game developed, the lineout drive became Louwrens’ preferred platform to launch raids down his favourite side:

In the first example, Louwrens takes a very obvious peep at his target as Holloway deserts his natural post and moves around to the open side: 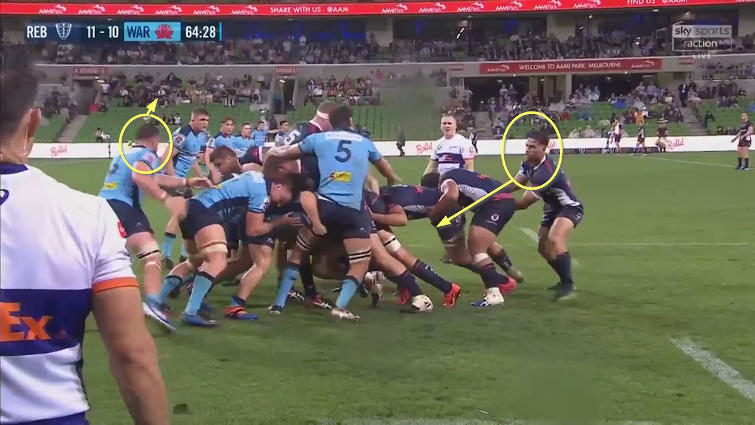 The Rebels are gifted a straightforward two-on-one, but Koroibete is not able to hang onto the ball.

The second instance makes for even more painful viewing for Waratah supporters. Jake Gordon is screaming for help near touch as Louwrens again greedily eyes up a gaping hole at shortside guard, but number 20 Lachie Swinton is much too slow to react to the threat.

This last example also illustrates how cohesive the Rebels 8, 9 and 10 were as a unit throughout the game, with Naisarani up in close support of Louwrens’ break.

That also applied to the link between Louwrens and the man outside him, Matt Toomua:

The box-kick by Louwrens is perfectly judged to offer Koroibete a target as he closes in on the receiver, the unfortunate Kurtley Beale. The winger likes nothing better, and the sheer force of his hit dislodges the ball and creates a turnover. Eleven seconds later, after another accurate diagonal by Toomua, the Rebels have the feed at a five-metre scrum.

A comparison of exits between the two sides reached the same conclusion. Here are Louwrens and Toomua in the second half:

The pass from Louwrens hits Toomua firmly in the chest, and the number 10 launches a huge clearance all the way down to the opposite 40-metre line. The Waratahs contrast comes the first period:

Jake Gordon’s pass falls at Will Harrison’s feet like a dead duck. Under pressure, Harrison puts the ball straight into touch, bringing the lineout all the way back only ten metres from the NSW line.

A more careful examination shows some flaws in Gordon’s passing technique at the finish. Instead of staying low and punching the hands after the ball, Gordon is upright and walks after the pass with a foreshortened follow-through.

The concerns about Gordon’s passing technique amplified as the game went on, particularly in situations where he had to pass from left to right:

The ball hits the receiver, Cam Clark, well above shoulder level, giving the wingman no time to meet the tackle on his own terms. That in turn creates pressure on the next phase, with Gordon forced to kick the ball away aimlessly.

Another sequence at the end of third quarter graphically illustrated the passing and decision-making issues from left-to-right:

On the first phase, Gordon walks towards the receiver and ends up spinning a pass off his wrong (right) hand. After Swinton catches the ball, he finds Gordon is only standing a couple of metres away from him.

On the second and third phases, there is no hint of Gordon doing anything but passing to the open side of the field, enabling the Rebels defenders to simply line up and tee off on their targets. Gordon never once looks back to his left; he did not hit the short side once in the game.

Three screenshots taken at the finish of each Gordon pass show a slightly different body position, and a variable distance from the base of the ruck at the end of each play: 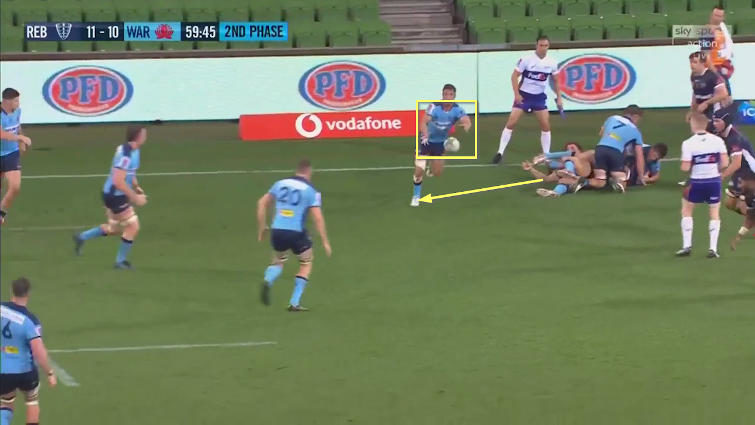 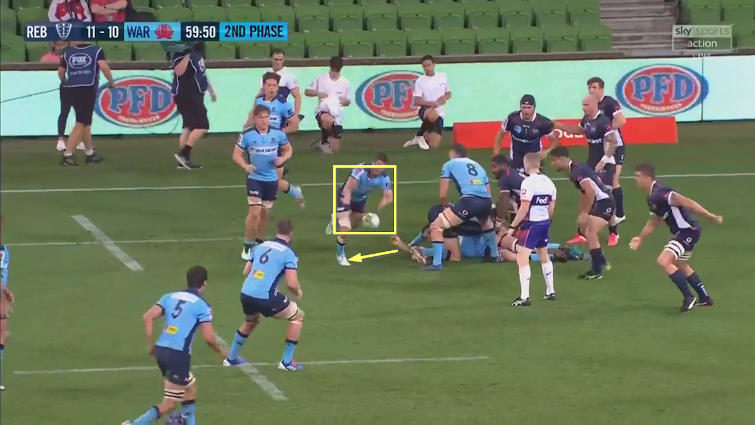 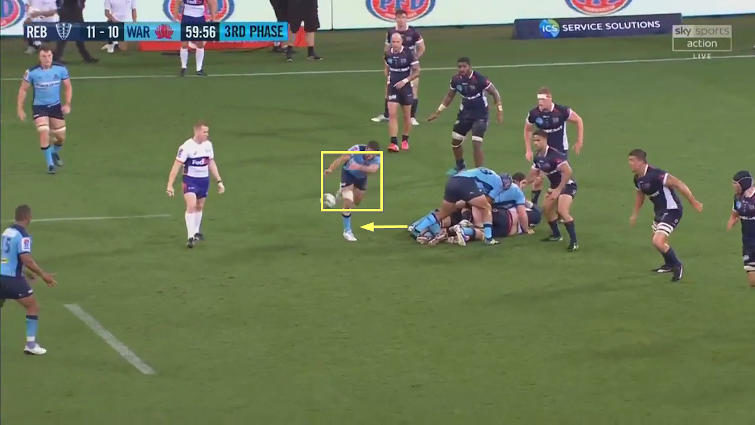 With a quality passer like Aaron Smith or Nic White, there is a much more uniform technique and distance from the base. The basics are explained here by Aaron Smith:

If the 9 moves away from the base, he has to make an attempt at least to square his shoulders towards the defence and check the rush.

The quality of the Rebels passing from left to right was visible on their last two scores:

Summary
Rebels head coach Dave Wessels will be relieved his charges have chalked up their first win of the season. He will be pleased at how well they adapted to the conditions, and he will be very happy that he seems to have unearthed a solid spine to his team in the combination of Isi Naisarani at 8, Ryan Louwrens at 9, Matt Toomua at 10 and Dane Haylett-Petty at fullback.

There is a rugged, robust quality to that quartet which should give him a sound base of operations moving forward.

The same cannot be said for the Waratahs. The combination of Jack Dempsey at 8 and Jed Holloway at 6 did not work out well against a short side sniffer as sharp as Louwrens, and Jake Gordon’s passing technique is not consistent enough to cosset and protect the rookie at 10 outside him. Behind them, Kurtley Beale’s point of strength has never been his solidity as a last line of defence.

Head coach Rob Penney will be just as worried by the failure of his game managers to take stock of the conditions in which the match was to be played.

The Waratahs called no drives from the lineout, and despite his running ability, Gordon never looked like exploring the short-side options in attack. On defence, that area remained an attractive area for probes by Louwrens until the end of the game; even from first phase, and even when the Rebels’ 9 was so obviously signalling his intentions.

When he comes to select his first Wallabies team in July, Dave Rennie will need that strong spine to give a backbone to his effort against Ireland. At the time of speaking, his crystal ball will be swirling and cloudy, and the omens are far from clear.