Regular trade rumour breaker Tom Browne – who, despite regularly copping criticism from the masses, typically has good mail – tweeted on Tuesday morning that Richmond “have or will make a substantial offer” to Moore.

Of course, before we start breaking out Photoshop to see what Moore would look like in yellow and black, it must be noted that Browne himself said Moore was “still likely to stay” at Collingwood.

(1/2) Richmond’s main target to replace Alex Rance is out of contract pies star defender Darcy Moore. There are good ongoing discussions at Collingwood. Where Moore is still likely to stay.

Moore’s manager, Liam Pickering, said he hadn’t talked to Richmond about Moore, but left the door open a crack by mentioning that a new deal for Darcy to stay at Collingwood was still in the negotiation phase and “no way near over the line”.

Trade talk, especially this early in the year, is routinely lambasted by fans who refuse to buy into rumour without hard proof – but, even if they don’t ultimately play out as newsbreakers suggest, most stories have at least a kernel of truth.

Let’s assume that’s the case for the talk of a Moore defection. It tells us that Richmond have no interest in sliding from their recent success back to the middle of the pack, and if anything we should have expected it.

I wrote in mid-2018 that Richmond’s breakthrough premiership, excellent financial position and impending acquisition of Tom Lynch had them poised to join Geelong, Hawthorn and Sydney as the AFL’s next glamour club.

All three of those clubs have maintained their time at the top by regularly poaching big names from their rivals, artificially extending their dominance beyond what the normal lifecycle of the ‘premiership window’ should allow.

Landing Lynch turned Richmond’s lone 2017 triumph into a two-premiership era, and established their position on top of the trade destination totem pole.

Of course, it also chewed up a big chunk of salary cap space, already hit hard by the massive cost of re-signing Dustin Martin at the end of 2017. It’s no surprise the Tigers didn’t go hunting again in 2019.

But Rance’s retirement is understood to have freed up around $1.5 million over the next two years, and all of a sudden they’re back in the game.

It doesn’t matter whether or not they get Moore specifically, they’ll land someone big this year or next – they’ve got too much cash spare and are too appealing of a destination not to. Zac Williams would be a beautiful fit.

So if you’re sick of Tiger Time I’ve got bad news – it’s here to stay. They’ll be regularly in the premiership mix for the next five years at a minimum.

So, Richmond are good and aren’t going to stop being good for a while. But let’s zoom out instead for a bit: if Moore does indeed swap his black and white for yellow and black, it could be a landmark moment leaguewide.

Most high-calibre trades in the modern era have seen players move interstate. There’s been a handful of quality players move from one Victorian club to another – Brendon Goddard probably the most notable – but it’s been a while since the league’s biggest clubs tried tearing chunks out of each other.

Collingwood president Eddie McGuire described how the Mapgies would retaliate if Richmond poached one of their favourite sons in no uncertain fashion: “The blood will be flowing down Punt Rd and Hoddle St again.” 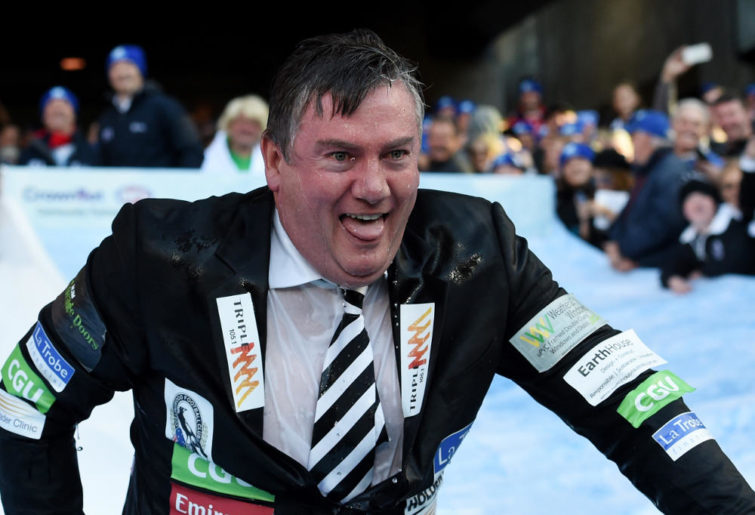 As the volume of trade activity has expanded over the past decade, the big Victorian clubs have only got more and more hungry for the taste of big fish, but the flood of players coming home from interstate is drying up.

Greater Western Sydney’s list has finally levelled out to a point where they should regularly retain their best players, while the state of Queensland seems to have patched what was once an almighty talent leak – for now at least.

After seeming to get bigger and more blockbuster year on year, the trade period fizzled in 2019 with Tim Kelly and Brad Hill the only names to really make a splash when they moved.

If the big Victorian clubs wanted to satisfy that taste for top-tier trade talent, they might soon be left with no choice but to turn on each other.

If so then it will bring some real bite to the trade period come October. And the AFL, which has profited greatly off the increased activity of the trade period in recent years, would be dancing in the streets to celebrate that fact.

It dovetails nicely that in the 1980s these same two clubs were engaged in vicious trade war over the likes of David Cloke, Phillip Walsh and Brian Taylor.

It nearly brought both to financial ruin – as McGuire put it, “the last time they started poaching from Collingwood, we put them in the bin for 30 years.”

Could history be about to repeat? Watch this space.