In the AFL more so than ever performance is judged in the context of a club’s age profile. Old teams are judged harshly and young teams are given more leeway.

However, discussion of age profiles is getting messy and use of overly simplistic and frequently misleading statistics is all too common. In particular, AFL media commentary is failing to recognise or at least convey that to establish a meaningful picture of a club’s true standing discussion of age profiles should be augmented by analysis of where within that profile quality resides.

In Part 1 of this five-part series a novel way of graphically representing exactly this is introduced, coined the Earlgram. Earlgrams are relatively straightforward, so don’t be deterred if you’re not statistically inclined.

The shape of the Earlgram is a histogram of player ages for the entire list. This is simply a count of how many players of each age there are on a list represented on the vertical axis, which are ordered on the horizontal axis from youngest on the left to oldest on the right. Player ages are as they will be at Round 1 of the 2020 season irrespective of a player’s birth date.

In addition, Earlgrams superimpose a colour scheme on these player age histograms based on different metrics that are intended to be proxies for each player’s value, which is obviously difficult to define.

Here 2020 team list age histograms are given a colour overlay that represents each player’s number of AFL games played in 2019, referred to as an AGP score. For players traded in, games played at their original club in 2019 is used and data is expressed as a percentage to standardise for finals participation.

Using senior exposure as a proxy for a player’s value means highly regarded youngsters aren’t appropriately valued in a real-world context. For example, all recent draftees are assigned scores of zero despite not even having the opportunity to be selected and despite some, like No. 1 pick Matthew Rowell, almost certain to be of AFL quality. However, speculation is avoided entirely by rewarding only player output to date.

Similarly, players that had injury-disrupted seasons in 2019 but are otherwise well-established in their team’s senior line-up are undervalued in AGP score. More sophisticated player valuation systems are explored further in Part 5 of this series. 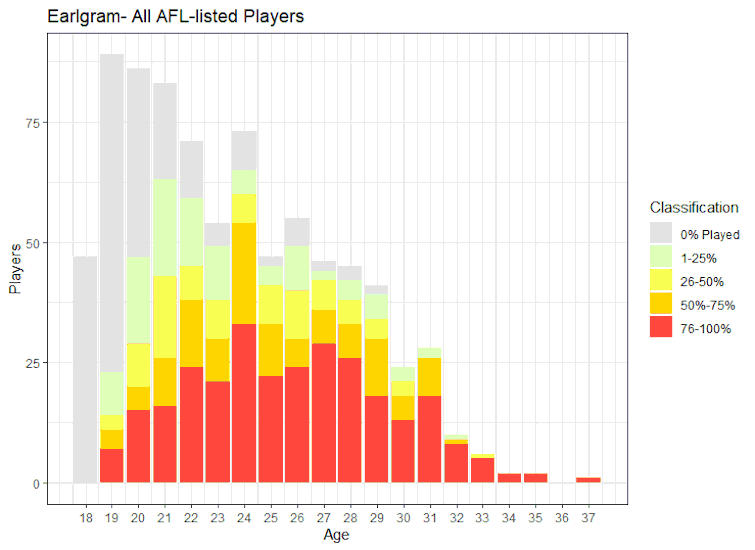 Figure 1 plots all players on an AFL list in 2020, which is useful in demonstrating the AGP-Earlgram method and the AFL’s overall age profile. Nominally players with an AGP score of 75-100 per cent are considered senior players – that is, coloured red. Focussing on just these players, we see there is a normal distribution in age, with most regular senior players within the range of 22 to 28. The zero and 1-25 per cent groups skew younger owing to the AFL development system that drafts speculatively at a young age and develops while on the team roster.

Part 2 of this five-part series closely examines the club AGP-Earlgrams presented below and assesses which of the current ‘rebuilding’ lists have AGP-Earlgrams conducive to future success. 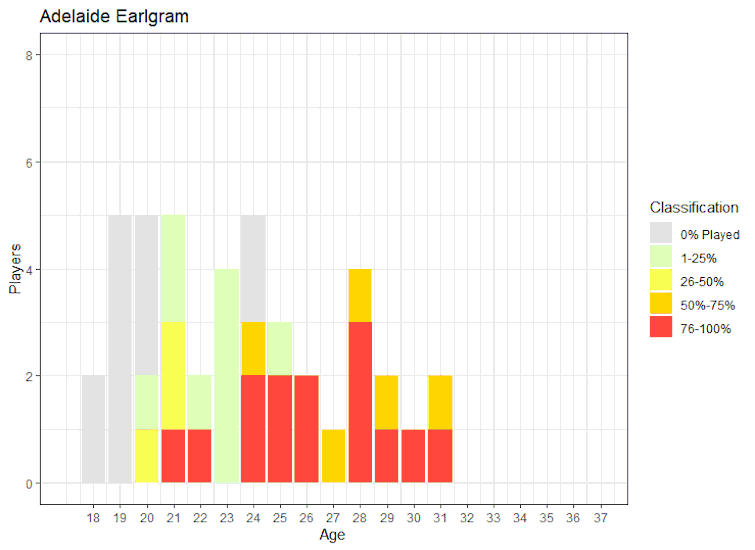 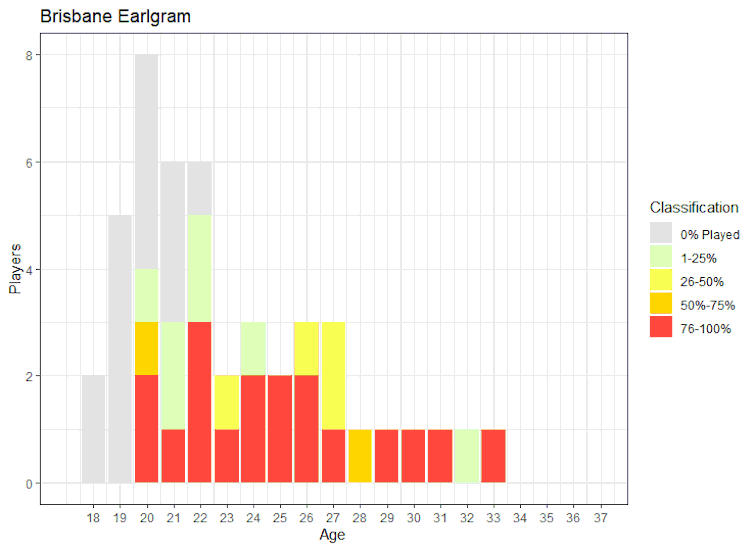 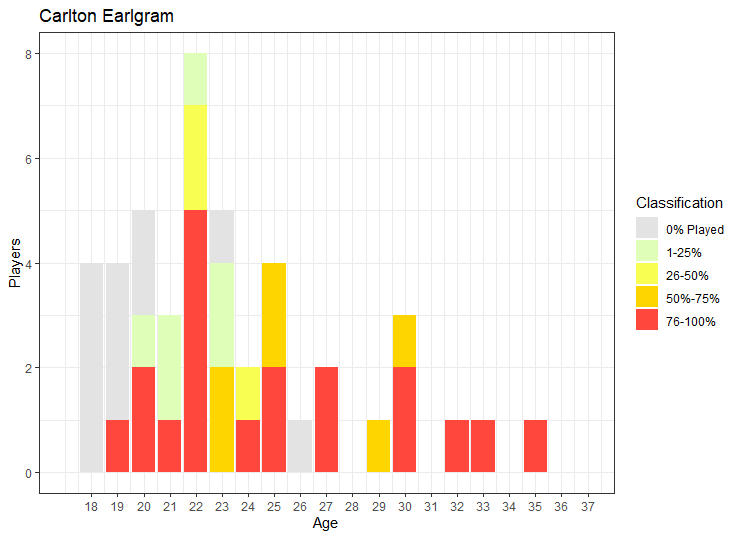 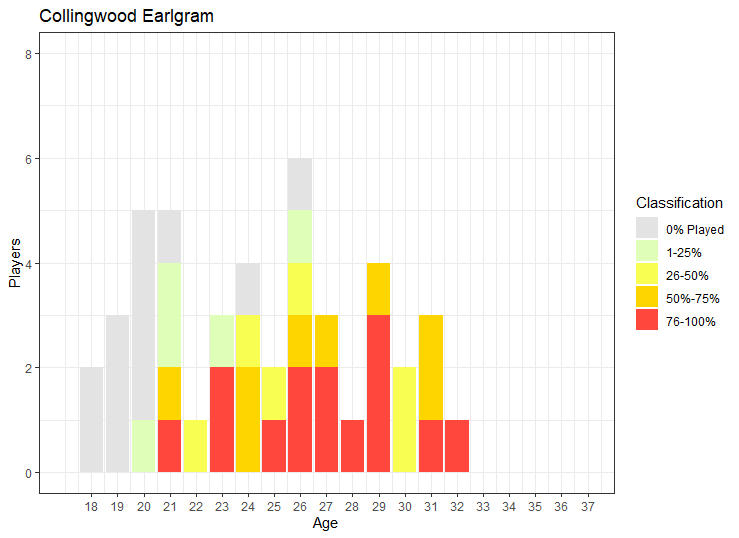 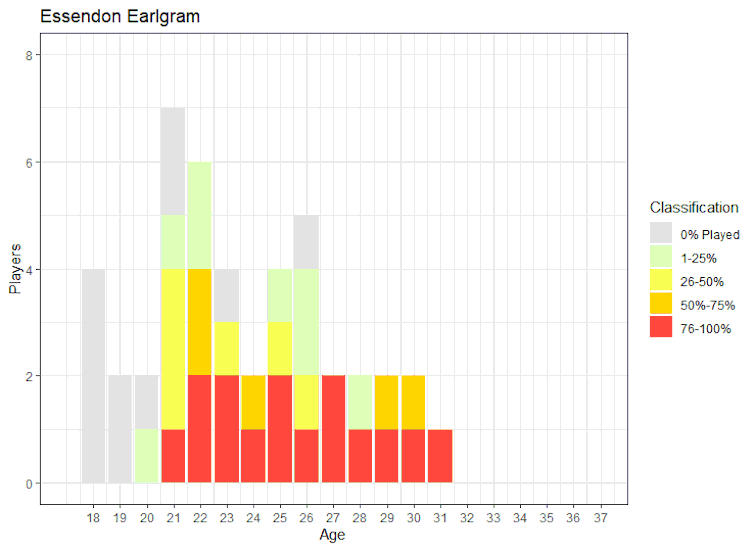 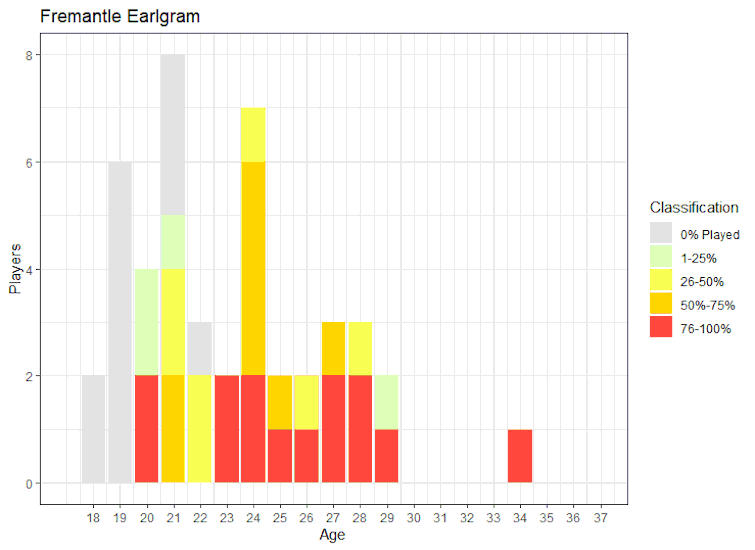 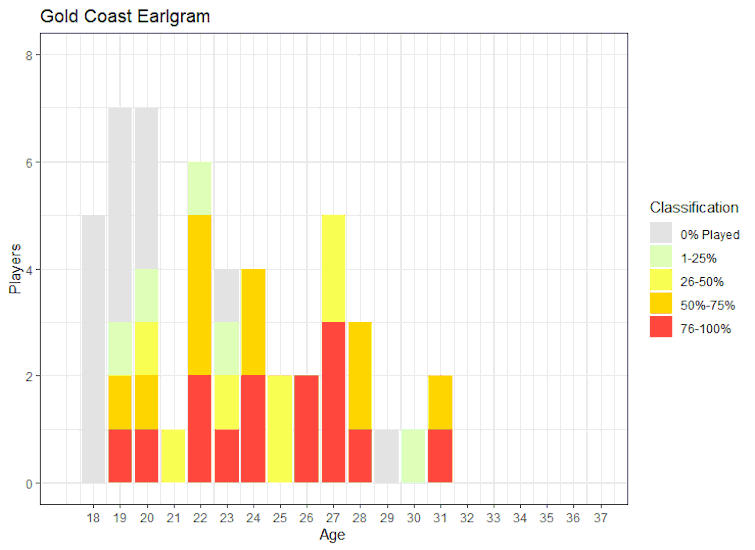 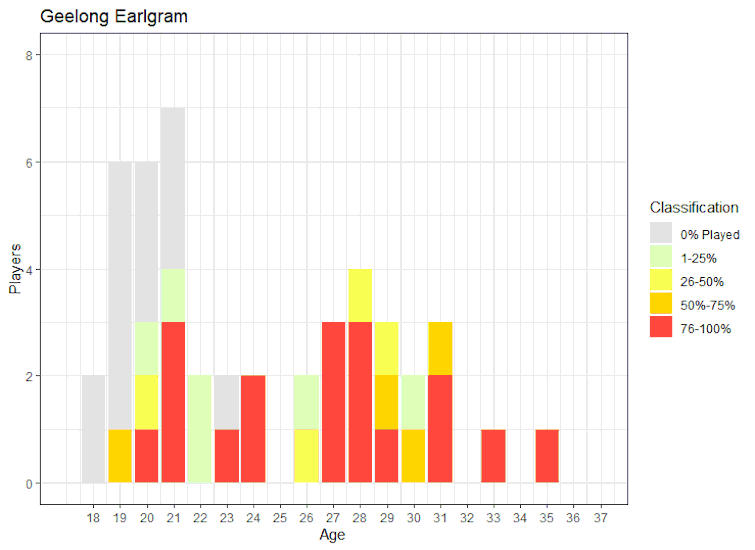 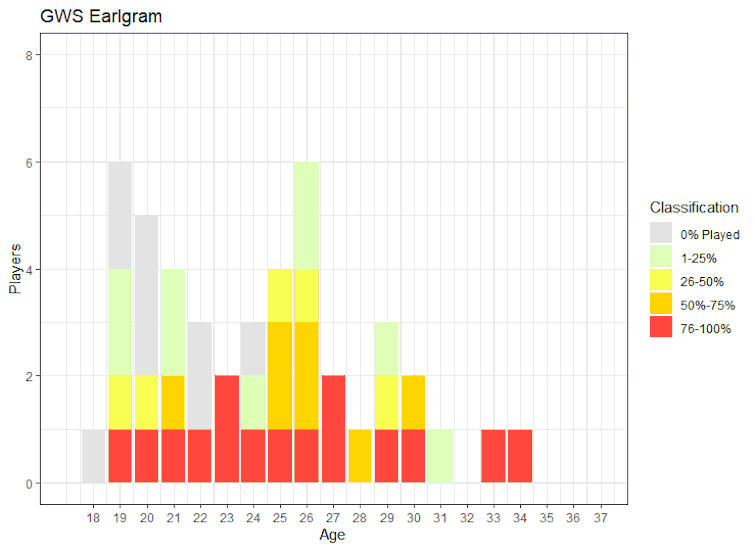 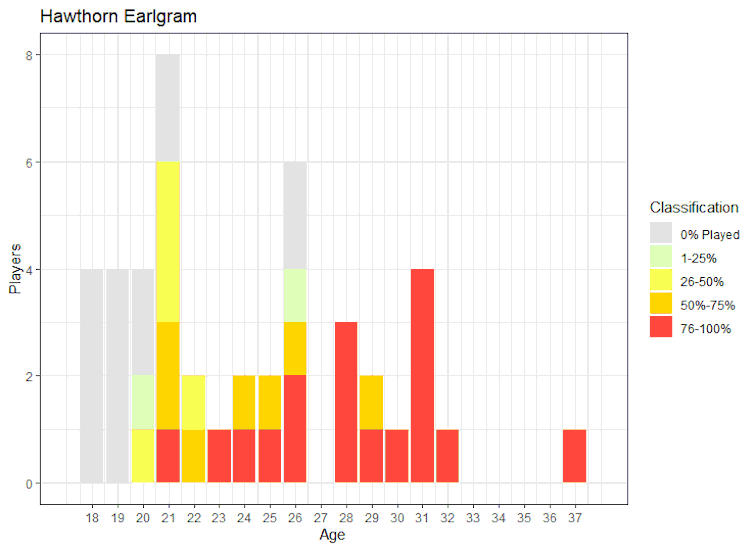 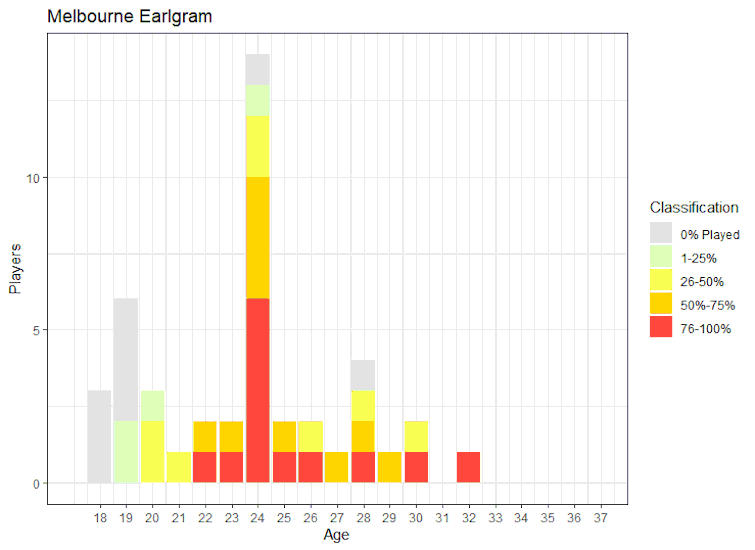 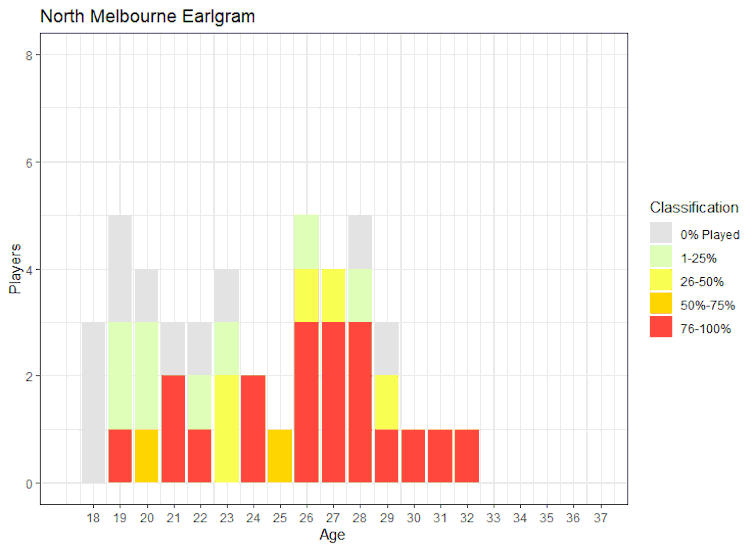 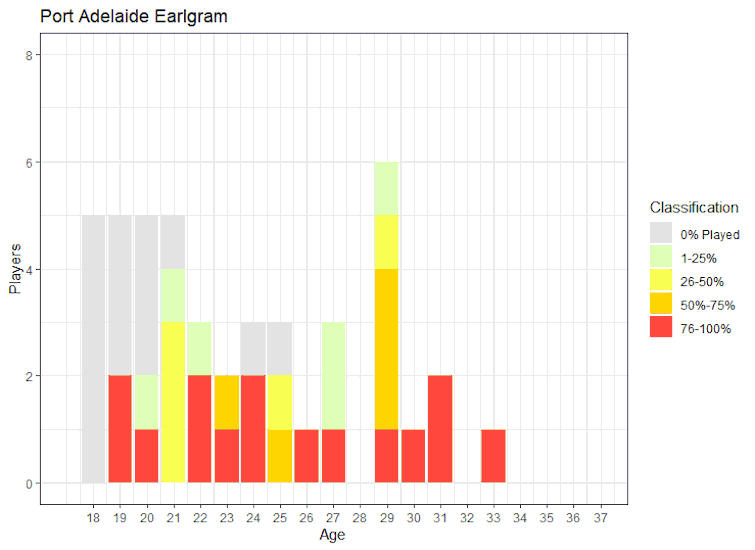 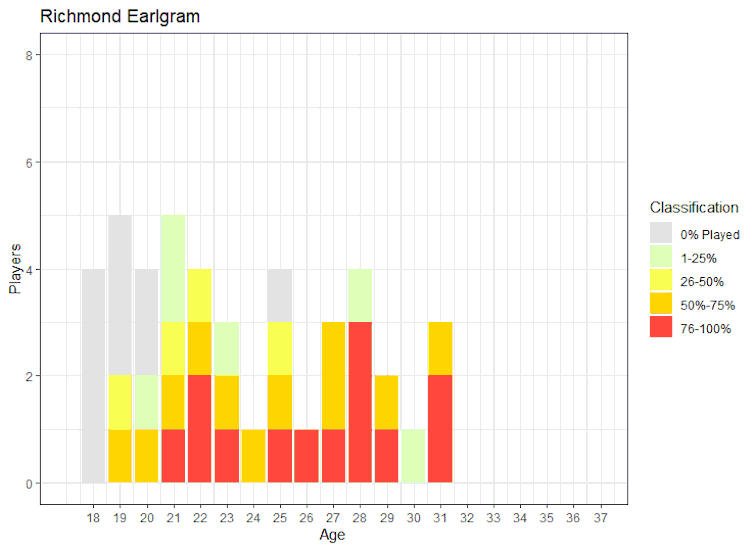 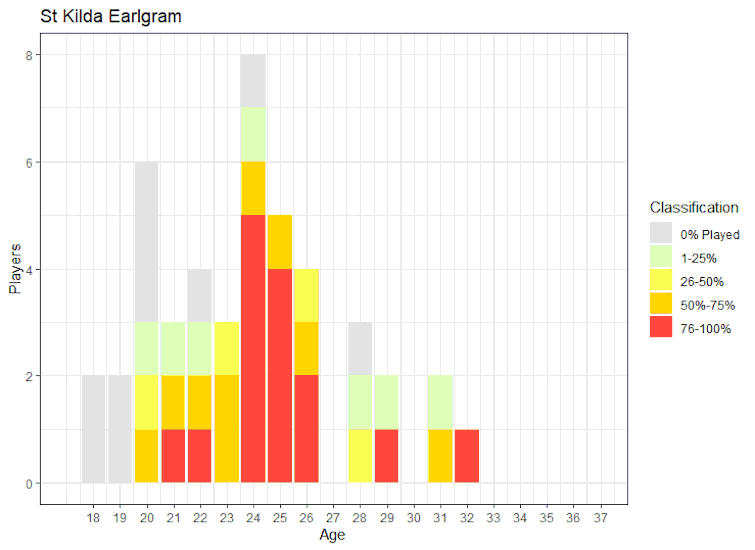 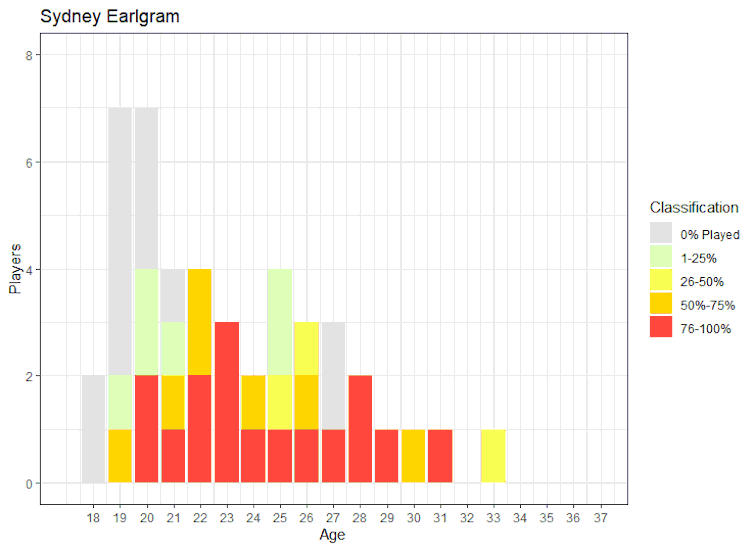 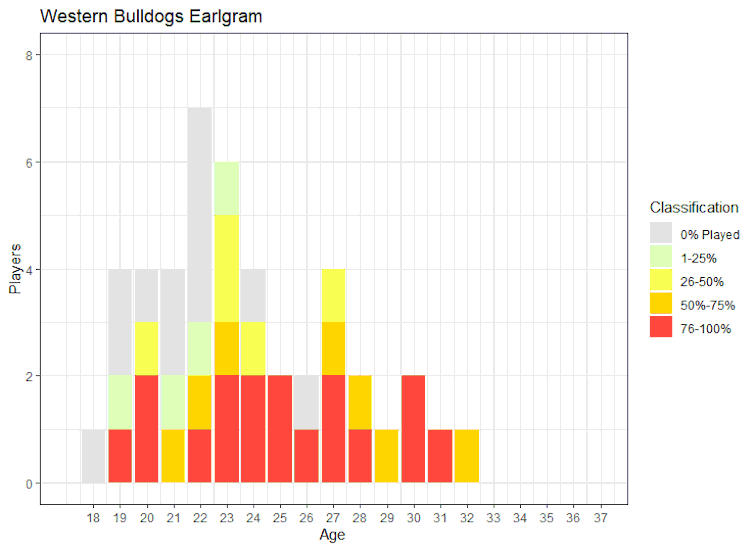 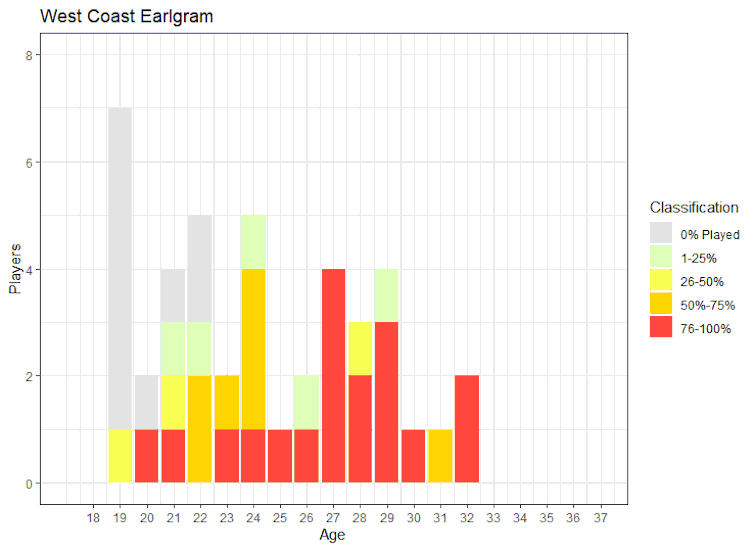