“No,” I replied politely, as myself and a bloke I’d only just met smuggled a case of it into Omiya Park.

It’s safe to say they do things differently in Japan.

I’d been nominated to hold one end of our esky by the fan club I was a member of because, as a foreigner, it was correctly assumed that stadium staff would simply wave me through the gate.

I never meant to join a fan club. I simply stood in front of someone’s flag at Nihondaira Stadium one afternoon as Shimizu S-Pulse took on Albirex Niigata, and a friendly Japanese bloke wandered over and asked if I wouldn’t mind getting out of the way.

That’s how I met Yuichi. We started chatting – he’d gone to university in Colorado – and before I knew it, I was a member of one of the numerous unofficial fan clubs that dot the terraces in Japan and follow teams home and away.

That’s how I ended up at Omiya Park. And Nissan Stadium. And the home of just about every major club in the Kanto region, from FC Tokyo to Chiba rivals JEF United and Kashiwa Reysol.

I’ve stood in the away end at Saitama Stadium, when a thousand S-Pulse fans stared down the might of Urawa Reds and 55,000 home fans clad in red. 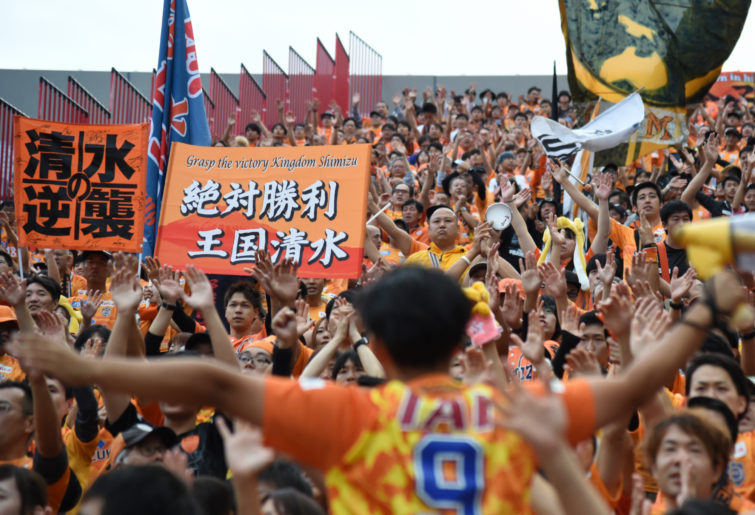 I’ve caught the train up to Todoroki Stadium on a sultry summer evening with hordes of S-Pulse supporters still dreaming of winning the league, or at least the match, against Kawasaki Frontale.

I’ve watched S-Pulse games further afield in places like Nagoya and Niigata and Kashima. I didn’t miss a Shizuoka derby, home or away, for three seasons.

Our fan club chartered a bus up to Kashima and celebrated by cooking venison on a portable barbecue in celebration of what we anticipated would be a glorious win over the Antlers.

They smashed us and won the league that day. Former S-Pulse striker Marquinhos scored.

When Shimizu made the 2008 League Cup final against Oita Trinita, it felt like the entire town ventured up the Tokaido Line to the National Stadium in Tokyo.

I was one of about 25,000 S-Pulse fans packed in behind the goal. Defeat seemed inconceivable. Shimizu lost 2-0.

All in all I’ve attended at least 100 games and seen everything Japanese football has to offer: from J1 and J2, Emperor’s Cup and League Cup finals, the AFC Champions League and even worked at a couple of FIFA Club World Cups.

I started writing about Japanese football and discovered a small but knowledgeable audience, and eventually the sort of people who read what I had to say grew in importance.

One day I was having lunch with some S-Pulse officials down at their training base near Miho, when one of them asked me what I would do to improve the team’s flagging fortunes.

“Sign Australians,” I replied bluntly. I didn’t realise they would take things quite so literally.

But that’s the beauty of Japanese football. As much as it resembles football elsewhere around the world, you never quite know what you’re going to get.

I loved every aspect of the J.League. From the packed stadiums to the madcap mascots, the hypnotic chants and the high standard of football.

Of course, there’s always the danger we end up fetishising a competition that has the same sort of problems as anywhere else.

But there’s something so exhilarating about the J.League. Once you’re hooked, you can’t stop watching.

The 28th season of top-flight Japanese football kicks off tonight and fans in Australia can tune into four live matches per round on Optus Sport.

I couldn’t think of anything more fun than if we all picked a J1 team to support, shared who it is in the comments, and committed to following their fortunes throughout the entire campaign.