The slate is wiped clean. A new season always brings the anticipation of something better.

But I’m entering 2020 with some apprehension. I’ve been following football for over 40 years. I can no longer wipe slates clean. At a certain point you begin carrying over the sins of seasons past. They’re now scarred into my psyche.

So I go into 2020 thinking the AFL need to consider a purge as a means to reinvent themselves and give the competition the lustre it truly deserves.

Here are ten things I believe the AFL should consider.

10. Disband Melbourne
I keep hearing the assertion that “we need a strong Melbourne”. Why? True, the Demons were once a great club, but that was over 50 years ago. Now they sit around with a sense of entitlement, accumulating top-ten draft picks, promising lots and delivering little. Why do we need this club in the competition? Why do we need a strong version of them? Why do we need the great city of Melbourne represented by this club? Let’s honour the Demons legacy by stopping the current incarnation from tarnishing it further and disbanding them. If we really need a red and blue team in the competition, let’s bring in Port Melbourne.

9. Revisit the expansion clubs
It might’ve seemed like a good idea to expand the competition and bring in new teams like Greater Western Sydney Giants, Gold Coast Suns and North Melbourne Kangaroos, but it’s just not working. The support they get in Victoria is piffling. They don’t really do anything for the competition. The Giants were in the 2019 grand final and nobody cared. The Kangaroos were in the 2019 season and nobody cared. Hard decisions have to be made. Let’s cut these three clubs and redistribute their players, thus strengthening the talent pool and improving the quality of the AFL overall.

8. What do we do with Carlton?
Carlton has provided much merriment in the new millennium, winning five wooden spoons and knocking Richmond out of the 2013 finals race despite not making the top eight. But the Blues have now accumulated a frighteningly good core of players that could be the stepping stone to dynastic success. As a lifelong Collingwood supporter this traumatises me. Sure, Carlton fans are happy, but what about the rest of us who have so enjoyed this millennium’s incarnation of Carlton? We’re greater in number. We’re the ones to please. I think it’s only right Carlton’s players were redistributed and it’s mandated that Carlton can never again have a first, second, third, fourth, fifth or sixth-round draft pick.

6. Colour the coverage
We complain about the coverage every year. Sure, I enjoy listening to Anthony Hudson’s bias against Collingwood as little as the next Collingwood supporter, but if we’re going to have tacit barracking in the commentary box, let’s go all the way. Let’s get active supporting for each club from a commentator apiece. Let’s go all out and have pro-wrestling-like commentary. It would be far more entertaining than what we hear now.

5. Richmond a powerhouse?
For decades we enjoyed the shenanigans over at Punt Road. A rotating door of coaches, botched draft picks, manure dumped on their doorstep et cetera. Ah, the good old days. And now Richmond has won two flags in three years as well as powered away in terms of membership figures. As a lifelong Collingwood supporter, this also traumatises me. What we have to truly understand here is the psyche of the Richmond Football Club is about angst, self-loathing and self-detonation. This success thingy in the modern era is an anathema. Let’s disallow these two flags and nature will do the rest. Their flags should be awarded to their opponents – to Adelaide in 2017 and, since GWS is out of the competition, to GWS’s last opponent in 2019, Collingwood. 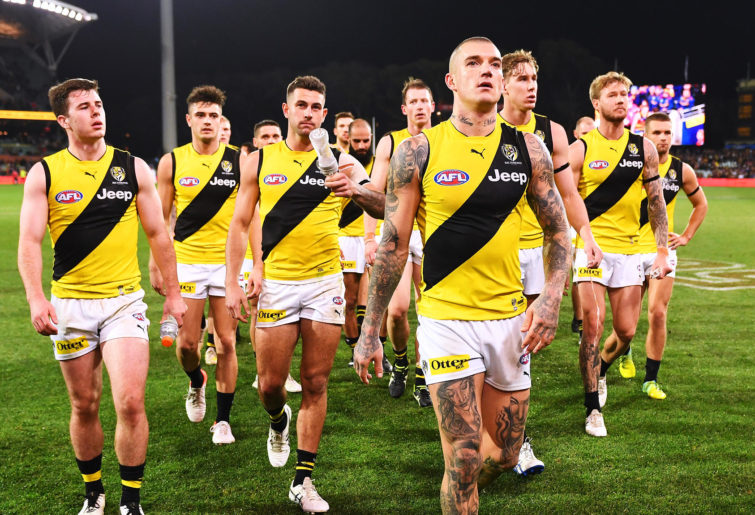 4. Harking back to tradition
I don’t want people to feel I’m just about ditching clubs or hamstringing them. I’m a big one for tradition. So let’s bring back the Fitzroy Football Club. They were everybody’s second club, including those involved at the Fitzroy Football Club at the time. Their demise saddened and disenfranchised many. Bringing them back would show something the AFL has lacked: genuine heart. Of course this would mean disentangling their identity from the Brisbane Football Club, which also means nullifying any accomplishments as the Brisbane Lions. Therefore we should reallocate the three flags they won in 2001-03 to their opponents those years. Collingwood would get two, bringing their total to 18, and the other would go to Essendon’s last opponent, Hawthorn. Now Hawthorn are winning flags without even trying. If I was vindictive in any way, I’d have them thrown out of the competition.

3. Rule changes
I used to be one of those idiots who would demand the AFL stop tinkering with the rules. Forget that. If we’re going to tinker with the rules, let’s go all out. Let’s change them during games. An AFL administrator could announce quarter by quarter what rules and what interpretations have changed. Actually, let’s give the administrator the power to change rules at any time during a quarter. People might consider this ridiculous, but it’s really just formalising what’s already happening anyway.

2. Collingwood
Ever since I was old enough to understand words, one lyric in Collingwood’s theme song has always bothered me: “All the premierships are cakewalks for the good old Collingwood”. Well, no, they’re not. It’s more like one in four attempts at a premiership is a cakewalk, albeit usually in some trying, draining, frightening circumstance. But that would sound stupid as a lyric. As a lifelong Collingwood supporter this line has repeatedly traumatised me. Given Collingwood’s figured prominently in injury lists for nine years running, let’s just get rid of the club song and replace it with the theme from the TV show MASH.

1. Who’s running the AFL?
As a supporter who pays a membership fee yearly, why do I get no say in who’s running the competition? I pay taxes and get a say in the Australian government, even if I do cast donkey votes (no, that does not mean voting Liberal). If I were a shareholder, I’d get a say in the board of that company. But nothing in the AFL. The AFL commissioner should be an electable position springing from one of two parties: the Radicals, who change rules constantly and want to expand, and the Traditionalists, who don’t change rules and want to keep the competition stable. Each party should campaign every four years to be elected and the members should vote for who they want.

I feel these are logical courses to take that can galvanise the AFL and take the competition in a brilliant new direction.