Three and a half hours of quality entertainment in front of a capacity crowd set to the backing of the non-stop Port Elizabeth brass band. In the end the South African crowd were dancing with such uninhibited joy it was hard to begrudge them the win.

South African captain Quentin de Kock batted eagerly upon winning the toss, believing that the pitch would start as a belter but get slower and lower as the day wore on. His own innings then proved the accuracy of his judgment as he unleashed an array of audacious strokes against the Aussie quicks, pulling balls barely short of a length over midwicket for six with ease and racing to 50 from just 31 balls. And then the air seemed to go out of the ball.

A score of 200 or more had seemed possible, but as the ball got softer batsmen started battling for fluency. Kane Richardson thrives in such situations and using his changes of pace adeptly was Australia’s best bowler, ultimately finishing with 2-21 from his four overs. De Kock was eventually out for 70 from 47 balls, his final 20 runs coming at a strike rate of 125 compared to the rate of 161 at which he’d made his first 50.

With the runs drying up, the host broadcaster dispatched Mark Nicholas to join former bowling star Makhaya Ntini in among the crowd in a hut sponsored by a famous chicken restaurant at deep point. The ensuing 15 minutes of commentary was somewhat surreal – Ntini was enthusiastically cheering on the home team as though it were a wrestling match, with Nicholas trying unsuccessfully to restore some gravitas to proceedings. Nicholas then seemed to cave in and began urging Ntini to eat a bucket of chicken, only for Ntini to decline on account of being a vegetarian. What the sponsors made of this it’s hard to tell, but social media loved it and it certainly helped keep me awake as 1am neared in Sydney. 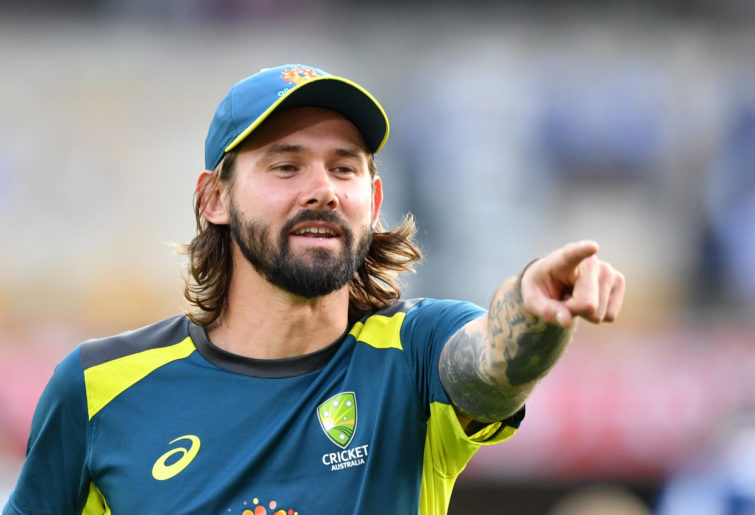 In the middle, the South African batsmen were finding the going increasingly difficult. After his player-of-the-match performance last game, Agar was effective here too – he didn’t take a wicket but conceded only 28 runs from his four overs. South Africa only managed 36 runs from their final five overs to finish with 4-158.

Steve Smith deserves special mention for his fielding. He was brilliant throughout but the highlight was when De Kock hammered a short ball from Adam Zampa over midwicket for what seemed a certain six. Smith had no right to even lay a finger on it but somehow managed to sail over the rope, catch the ball and foist it back into the field of play. When the return came in the batsmen had only managed a solitary single. It was a special, memorable moment.

Warner began the Australian chase in sparkling fashion. When Finch was out for 14 in the fifth over the score had already raced to 48. Smith then joined Warner and they put together a partnership that seemed to have Australia cruising for victory.

But, just as had occurred with South Africa, scoring became much more difficult as the ball lost its hardness. And then on 1-98 the turning point of the match occurred when Faf du Plessis held a remarkable catch at long on to dismiss Smith for 29. The ball had been clouted with perfect timing but Du Plessis surged forward, dived and caught it a centimetre above the ground.

Australia needed only 61 from 45 with eight wickets in hand, and with Warner still in and playing well, victory still seemed assured. But it all unravelled with astonishing speed to the backdrop of an increasingly feverish crowd. Alex Carey and Mitchell Marsh could not come to grips with the lack of pace and did not last long. Even Warner was now finding boundaries hard to come by and was not getting enough strike.

With two overs remaining Australia had six wickets in hand and needed 20 runs, but even at this point the visitors looked likely victors.

But Wade went to turn the first ball of the penultimate over for a single only to spoon a leading edge back to Kagiso Rabada and Agar and Warner could only manage three runs from the rest of the over. The final over yielded only four runs: not only did Australia lose but in the end it wasn’t even close, with South Africa winning by 12. Warner finished stranded on 67 off 56 balls, not surprisingly the first time in any game of T20 cricket that Warner has finished not out in a chase but his team has not won.

And so the series is locked at 1-1 as we head to Cape Town. The match starts at 3am AEDT on Thursday morning, a terrible timeslot to be sure, but it should be a captivating climax to the series.