Only the die-hard Celtics fans and a few NBA analysts were pronouncing just how much potential Pierce had within him. Maybe they really did see something, or maybe they just liked hyping up the players that played for their team.

Either way, there is only so much attention the casual fan can give, and the truth is the majority of it went to more flashy, more athletic, more stylish players. Fans, especially the younger ones, naturally gravitated to Allen Iverson, Vince Carter, Tracy McGrady and Ray Allen. And that’s just in the East.

But September 25, 2000 is not just a random date taken before the start of the 2000-01 season. No, on this day all NBA fans were nearly robbed of witnessing one of the greatest careers of the 2000s. A fight broke out at a Boston nightclub where Paul Pierce was stabbed 11 times in the face, back and neck, along with having a champagne bottle smashed over his head in the VIP pool room.

Fortunately Tony Battie, Pierce’s teammate, alongside Battie’s brother were there to rush him to the hospital where the 22-year-old Paul Pierce had lung surgery. The damage was so bad that one stabbing went as far as seven inches deep. No one knows for certain what the fight was about but Pierce would later confess the incident brought upon panic attacks and depression.

However, Paul Pierce would be the only Celtic that season to not only play all 82 games, but to start in all of them. This is an astounding testament to Pierce’s character. 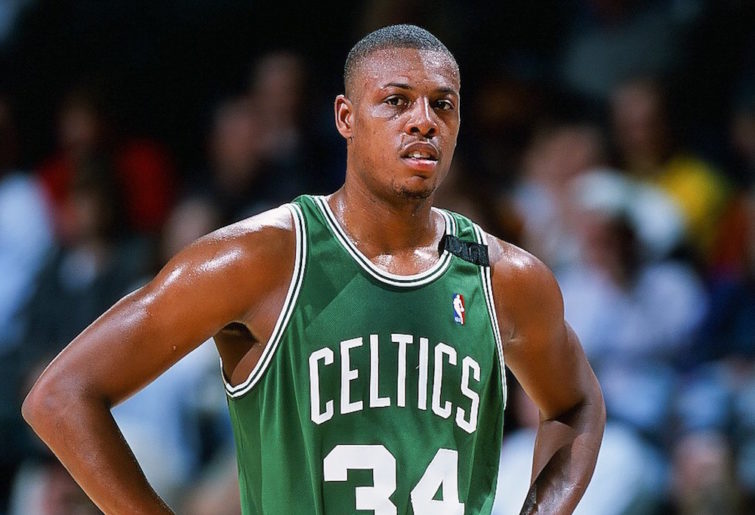 But when judging the entire franchise, the Celtics of 2001 still looked like impostors, wearing a similar jersey with a similar logo that so many greats before them had worn, but just not victoriously. Remember, they still hadn’t won a playoff series since 1992, Larry Bird’s last season, and while Antoine Walker was paid like a franchise player and Paul Pierce was certainly rising, fans entering the 2001 season had not seen a franchise player since.

And there seemed to be more than an even chance that the ball club playing before disgruntled fans in the Fleet Center might yet show further deterioration before it ever displayed any signs of marked improvement. But in retrospect, this was an important season of transition, even if there was no substantial improvement in the league standings, because the painful Rick Pitino era mercifully ended 34 games into the new season.

Assistant coach Jim O’Brien was given the ultimate promotion and took full advantage of it. Handed a nose-diving, low-expectation 12-22 team, he brought them to a break-even 24-and-24 record.

Gearing towards a slightly more hopeful ending to the season accompanied with new leadership, the Celtics were set to take on the LA Lakers on their home court. Although the Celtics were not as evenly matched as they would have liked, the classic Celtics-Lakers rivalry never faded out.

And Paul Pierce at age 23 rose to the occasion, and went off for 42 points. At the end of the game Shaquille O’Neal, only the league’s best player, gestured to a reporter to use his notepad and infamously pronounced: “My name is Shaquille O’Neal and Paul Pierce is the motherf***ing truth. Quote me on that and don’t take nothing out. I knew he could play, but I didn’t know he could play like this”.

While this was remarkable progress, changes to the team still had to be made quickly. They needed a reliable centre, they needed to rebuild the back court, they needed to be more intimidating on defence. All this needed to be fixed urgently as Paul Pierce and Antoine Walker looked to be entering their primes.