The first three articles in this five-part series have focused on the age distribution of senior AFL players – those who participated in 75 per cent or more of their club’s AFL games over the course of the season – to gauge the youth of the teams’ important players.

However, the total senior players at each club is also significant. A lower total suggests the team either has a lesser number of senior-quality players on its list to begin with or has had significant injury disruptions in that year. Whatever the case, the number reflects how consistent a club’s senior team selection was over the course of the year, and this stability is clearly a factor in premiership success.

Table 1 (above) demonstrates that three-quarters of premiership teams over the past 12 years had at least 18 players play 75 per cent or more games over the course of the successful season. Only Western Bulldogs (2016), Richmond (2019) and Hawthorn (2014) had less.

Table 2 (below) shows that the league average for players that participated in 75 per cent or more AFL games in 2019 per club was 16.1.

Reigning premiers Richmond (2019) had just 15. Their early-season injury concerns and timely return of senior players at finals was well documented.

Only North Melbourne (20), Brisbane (19), Geelong (19) and Carlton (18) had settled senior line-ups typical of premiership teams. This is not to say these clubs necessarily did not have injury concerns, but their team selection was nonetheless stable. One interpretation is that these teams have greater scope to decline in 2020 if they are unable to maintain this consistency.

The bottom three for team selection consistency in 2019 were Melbourne (12), Gold Coast (13) and Collingwood (14). These clubs have the greatest scope to improve simply by settling their senior 22 and building cohesion. In the case of Melbourne and Collingwood, players returning from injury will facilitate this, but Gold Coast may simply be a case of not having enough senior-quality players on the list to begin with.

Table 2 shows that only five players that participated in 75 per cent or more of their club’s AFL games in 2019 will not play in 2020 and that there was a maximum net loss of two senior players and a maximum net gain of one senior player per club over the 2019 offseason trade period.

Table 2 also speaks to broader themes in AFL list management. A league average of 16.1 players per club participating in 75 per cent or more AFL games suggests either around 30 per cent of players in their club’s best 22 were seriously hampered by injury in 2019 or that there is a deficit in AFL-capable players in an 18-team competition.

In recent history AFL list management has grown more sophisticated. Player analysis has become focussed on ‘elite’ traits, meaning otherwise half-decent players without an elite selling point quickly become ‘list cloggers’. This is in line with professional team sports globally. However, does the AFL have the talent pool to approach list management in this way?

The introduction of Gold Coast and GWS and the creation of close to 100 new AFL list spots was largely coincident with the emergence of this elitist approach to recruitment. So on the one hand list managers were becoming more discerning in player assessment and on the other hand there were many more list spots to fill. Perhaps AFL clubs now allocate too much list space to lower-end speculative talent and not enough on players already capable of playing senior football to a passable level.

Hawthorn’s recent recruiting suggests they may be thinking along similar lines. Tom Scully and Jonathon Patton are damaged goods, sure, but they are less speculative than new draftees in that they’re aiming to recapture something they’ve proved capable of in the past.

Michael Hartley at Essendon was about as ‘on the cusp’ of an AFL side as a player could be. These low-cost player acquisitions point to a philosophy that is prioritising numbers and de-emphasising the need for every player to be flawless.

Missed chances will eat away at Cats

Geelong coach Chris Scott lamented his side’s inability to capitalise on a period of dominance before halftime in the AFL grand final defeat to Richmond. 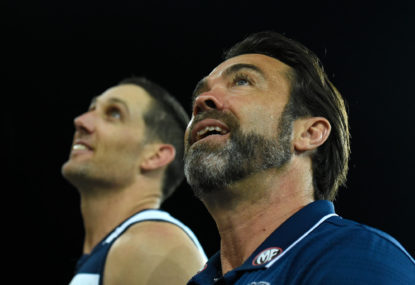 Missed chances will eat away at Cats

His long wait to appear in an AFL grand final is over but Patrick Dangerfield admits it’s a bittersweet feeling after Geelong’s 31-point loss to Richmond.

It wasn’t the fairytale finish Gary Ablett was hoping for, the Geelong champ bowing out as a grand final loser after Richmond’s comeback 31-point win at the Gabba. But there were touching scenes after the match, the Tigers briefly pausing their premiership celebrations to give the Hall of Fame Legend in waiting a guard of […] 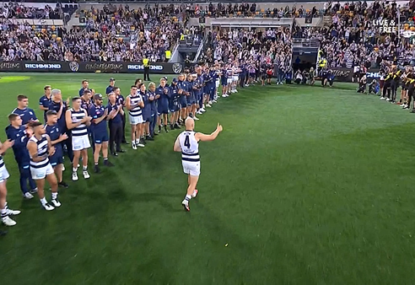