The growth of the women’s game has been showcased through these early stages, as the lead-up and interest from the wider public continues to push to new levels.

This increased exposure has been felt especially by hosts Australia as they carried the favourites tag into the tournament.

The loss to India and close win over Sri Lanka in their opening two games has only increased the pressure on an Aussie team expected to make the final in front of potentially 90,000 at the MCG

Australia are still placed to make it out of their group, but what has been highlighted in their opening two matches is playing with pressure and expectation can unhinge even the most focused and skilled team.

Players often say they thrive on pressure, but they can be wrong.

Under early pressure against Sri Lanka, falling to 3-10 chasing a modest 123 to win, captain Meg Lanning and Rachael Haynes eventually guided the hosts to a comfortable victory.

The Aussies have the strongest and deepest squad in the tournament, which has allowed them to record 26 wins out of 31 T20 internationals before the World Cup. England and India have been the only two nations to get close to an Australian team which has won five T20 World Cups.

The key for Australia is to continue this aggressive attitude as they look forward to their next game, against Bangladesh on Thursday.

Batting collapses – even though rescued in the second game – must be addressed immediately, while Lanning must lead her team from the front.

The Aussies have fought for greater sponsorship dollars and professionalism, but this growth brings an increase in expectations and scrutiny. The current tournament being played on home shores brings an intensity no other team in the tournament faces.

However, this unique opportunity should be embraced, as it represents much of what the Aussies have been fighting for as they look to close the gap on their male counterparts.

The Australian team must turn the pressure into a positive under which they are able to thrive and let their talent flourish.

Australia's Commonwealth Games campaign is off to a winning start - but not without a major scare from India. Reduced to 5/49 chasing 154… 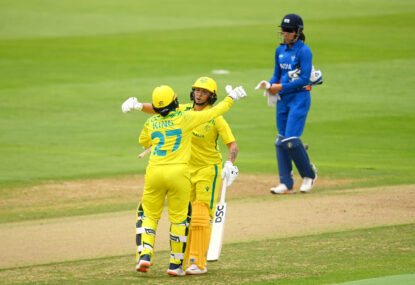