In the decision-making positions at numbers 9, 10, 12 and 15, they always looked for players who were equally accomplished with the boot, on the run and with the hands.

On occasion, they would lift the cloth and look under the table for guys who had the potential to become all of these things at the highest level but were playing a different position.

They shifted Dan Carter from inside centre to flyhalf, and Ma’a Nonu from outside centre to second five-eighth, asking both to learn and refine their kicking and passing game.

Say their names now, and it is more like a hushed prayer. You find yourself talking in reverential tones about two complete players, the most rounded hosts of the number 10 and 12 jerseys in the history of the game. 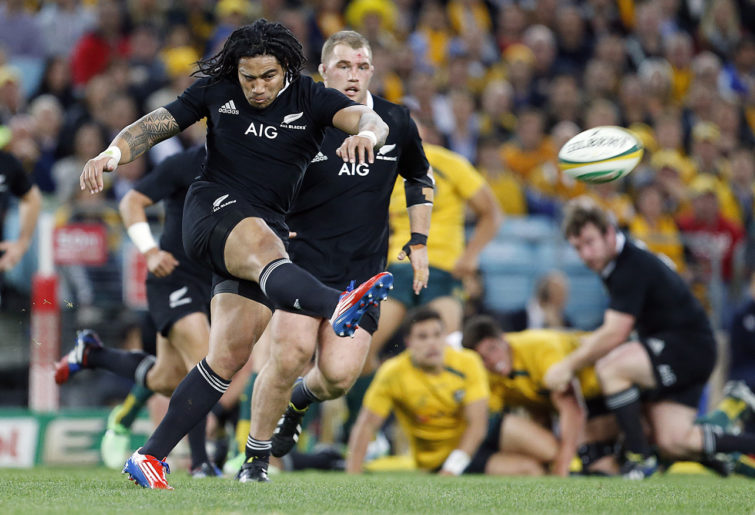 Ma’a Nonu improved his kicking and became one of rugby’s great inside centres. (Photo: Paul Barkley/LookPro)

But not all the best players belong to the All Blacks, and the triple threat has not been lost completely to Australian rugby.

Over the last couple of weeks, there have been signs of an attacking revival.

Last weekend, the Reds scored four first-half tries on their way to a 24-12 lead against the Jaguares at the Estadio José Amalfitani, only to find it neutralised by a lopsided penalty count in favour of the home side. They backed up that performance with a 64-5 demolition of the hapless Sunwolves in Brisbane. Fourteen tries in two games is not a bad return.

Meanwhile, the Brumbies banished the ghosts of a last-gasp defeat by the Highlanders with a superb attacking performance against the previously unbeaten Chiefs in Hamilton.

Between them, the Reds and the Brumbies have scored 36 tries in eight games, at a healthy 4.5 per game average. Not a wholesale resurrection, but some clear twitches of life.

The revival has been triggered by players who, like Dan Carter, have played a significant amount of their rugby at both first and second five-eighth.

James O’Connor has shifted from 12 to 10 in the last two matches for the Reds, while the Rebels’ Matt To’omua – probably the frontrunner for the flyhalf spot for the Wallabies in July – can handle both roles with aplomb.

James O’Connor has been in excellent form for the Reds. (Photo by Patrick HAMILTON / AFP via Getty Images)

In Canberra, the number 12 from last season’s talented Junior Wallabies side, Noah Lolesio, has made the switch to 10 for the Brumbies. He currently heads up the potentially outstanding group of young flyhalves – along with Will Harrison and Isaac Lucas – who can be expected to lead Australian rugby into a new era.

Why does the transition from 12 to 10 make attacking sense? The instincts of a second five-eighth, or inside centre, are to play in the teeth of the defence, close to contact. They expect to have to make important decisions under intense physical pressure.

They can all run, and some can pass too. If they can be taught the nuances of the kicking game, you may just have the real deal on your hands.

Lolesio has received ample support in that department at the Brumbies. Halfback Joe Powell is responsible for the box-kick exits, number 12 Irae Simone kicks for position further upfield, and fullback Tom Banks handles the penalties to touch.

On the occasions where he has been required to kick himself, Lolesio has demonstrated a deft touch. Here is his well-weighted short diagonal into an empty backfield for the Brumbies’ fourth try against the Rebels in the second round:

Against the Chiefs in Hamilton, the plan was not to kick for position but to keep ball in hand and wear down the imposing home defence over a succession of phases. The men from Canberra built more rucks, they offloaded twice as much and won the line-break battle by a conclusive three to one ratio.

At the heart of it all was the performance of Lolesio at 10, and his desire to engage the Chiefs defence right on the advantage line. An early example occurred when the Ponies ran the ball out of their own 22-metre area:

As soon as Lolesio receives the ball, he is looking not to pass immediately, but to engage the defenders opposite him, Aaron Cruden and Anton Lienert-Brown. He delays the pass until he is sure he has fixed Cruden and brought blindside winger Solomone Kata into play on Lienert-Brown’s weaker shoulder.

Whenever Lolesio had the opportunity to engage the defence and offload, he took it:

The first example is a classic Dan Carter move. Lolesio drifts onto the outside shoulder of Lienert-Brown and gets the offload away to his inside support. He’s not trying to make a break, just manoeuvre his support in behind the defensive line. James Slipper does just enough to knock the ball up in the air and tip it back to Tom Banks for the first try of the game.

In the second instance, Lolesio repeats the inside centre dose. He knows he has the strength to bust through the seam between two Chiefs forwards, fall forward in contact and make the transfer to Allan Alaalatoa under full control.

One of the most interesting aspects of the Brumbies attack was the connection between forwards and backs with ball in hand. Here’s a snapshot from a sequence early in the game: 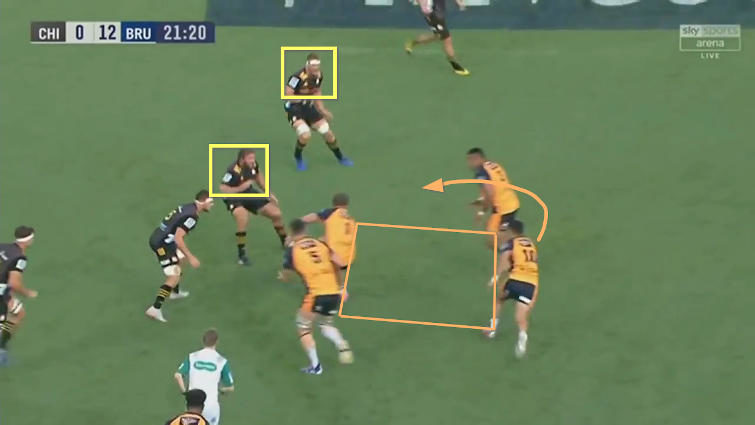 The three-man forward pod, composed of number 5 Caderyn Neville, number 3 Alaalatoa, and Slipper in the middle, form a diamond shape with Lolesio just behind them. Alaalatoa and Neville are positioned slightly behind Slipper at the tip of the spear and Lolesio is only a metre behind the loosehead prop as he goes to make the linking pass.

Most flyhalves would be positioned less aggressively than Lolesio, at least one metre further back and towards Slipper’s right shoulder, keeping their depth in order to attack wide. But Lolesio is projecting a run between the two Chiefs forwards opposite the pod.

Half a minute later, Lolesio found himself looking at the picture he wanted:

The pass from hooker Connal McInnerney is really only a short lob, but it enables Lolesio to turn upfield and penetrate the gap between Mitchell Brown and Mitch Karpik, then offload from the ground for good measure to continue the momentum.

Later in the half, the Brumbies were able to unveil another nuance to their attacking plan:

Firstly, Lolesio makes a short bust off the ball from McInnerney, then the Brumbies introduce Tom Banks at first receiver on the narrow side, using a sharp spin move to beat the first tackle.

Now let’s put it all together by spotlighting the long kick-off return sequence which resulted in the Brumbies’ fourth try of the game at the start of the second period. It began 15 metres from the goal-line with a carry by Solomone Kata, and ended with Pete Samu’s tackle-busting try 14 phases, two minutes and 90 metres later.

Here are Lolesio’s key contributions as the sequence unwound:

First, there is a pinpoint long pass off his right hand which pulls Irae Simone straight onto the ball with forward momentum, followed by that familiar shallow diamond pod shape on the next play.

On the next phase, Lolesio is off and running between Chiefs forwards again, with Tom Banks to back him up on the short side on the following phase. Suddenly the Brumbies are almost up to halfway without taking any undue risks.

When Samu scored off a Lolesio pass to finish the move, the Brumbies had established the ideal picture: 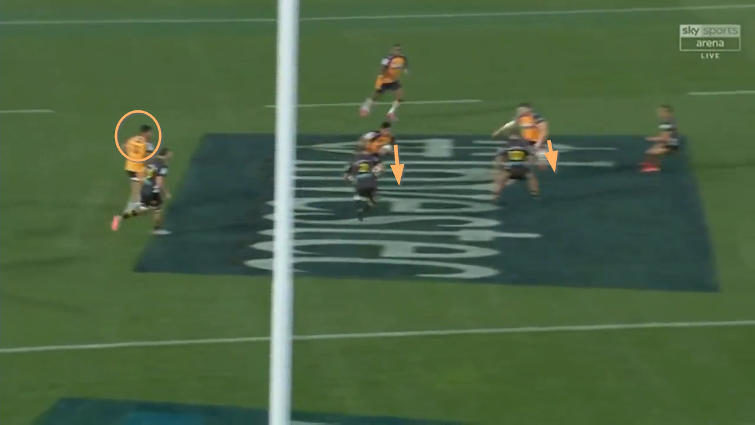 It may not look like much, but Pete Samu is already on the outside shoulder of the defender and has a couple of metres of space to run into. That is all he needs against Chiefs hooker Bradley Slater.

Summary
Those who see only the body of Australian provincial rugby lying cold and lifeless on the mortuary block may have to think again – whatever becomes of Super Rugby in the future.

There have been some distinct signs of the corpse twitching back into attacking life recently. The Reds ran riot in the first half at the Jose Amalfitani against the Jaguares, then scored ten tries against the Moon-Doggies at Suncorp Stadium.

Meanwhile, the Brumbies righted the wrongs of a needless home defeat by the Highlanders with a comprehensive win in Hamilton against the table-topping Chiefs. At one stage, they were 26-0 up on the scoreboard.

A common theme in recent Australian improvement has been the selection of 10/12 hybrids at flyhalf, whether it is James O’Connor at the Reds, Matt Toomua at the Rebels or young Noah Lolesio in Canberra.

Lolesio showed a refreshing willingness to stand short and attack the line from first receiver against the Chiefs. His passing was empathetic and always led the receiver in the right direction for him, and the wrong one for the defence. He offloaded accurately up top and off the deck, and presented the ball strongly after a ruck formed over him.

It is too much at this stage of his career to anoint him as Australia’s answer to Dan Carter, but at least he has the opportunity to follow a similar career trajectory. He has the running and the passing skills already, and the Brumbies will give him the chance to develop his kicking game further.

Just like Will Harrison at the Waratahs and Isaac Lucas at the Reds, all he needs is more time and patience invested in him. Those three together would indeed represent a triple threat to all-comers.