So said Ken Hinkley in Round 1 of 2019, after his side – featuring three debutants in Connor Rozee, Xavier Duursma and Zak Butters – defeated Melbourne by 26 points to start their season.

Asked why, given it was competing with landmark finals wins over Collingwood in 2013 and Fremantle in 2014, Hinkley praised the courage and commitment of his players.

But, even if he didn’t say it, no doubt part of the inspiration for his jubilation was that Melbourne, having reached a preliminary final the year prior, had gone in as heavy favourites, and especially for a team that had lost two established senior players in Chad Wingard and Jared Polec over the offseason, appeared a big scalp.

Unfortunately for Hinkley and his opposite number on the day, Simon Goodwin, this simply did not prove true over the course of the 2019 season.

There was much more wrong at Melbourne than we realised, so Hinkley’s triumph proved a middling scalp at best, and his side a middling side on the final ladder.

Coming into a new year, no coach is under more pressure than this pair.

Hinkley tied a noose for his own neck late last year when he stated that expected to be sacked if his side didn’t play finals this year, then doubled down on that earlier this month saying Port was targetting the flag in 2020.

After five years in the wilderness, supporters would be pleased to know the club has high ambitions, but at the same time Hinkley has handed critics a Verdun-esque stockpile of ammunition to hit him with if the Power should struggle early in 2019.

Any pressure will only be ramped up by the fact Port have already traded out their first pick of the 2020 draft. Carlton’s Liam Stocker trade loaded up the pressure on Brendon Bolton this year – though I expect he’d have copped the axe eventually either way – and the same could happen to Ken.

Hinkley’s summation of his situation seems accurate. His deal expires at the end of 2020 but he’ll trigger a one-year extension if he guides his side to finals. The majority of fans having already lost faith in him, it appears unlikely in the extreme Hinkley could earn a new deal without reaching that benchmark. 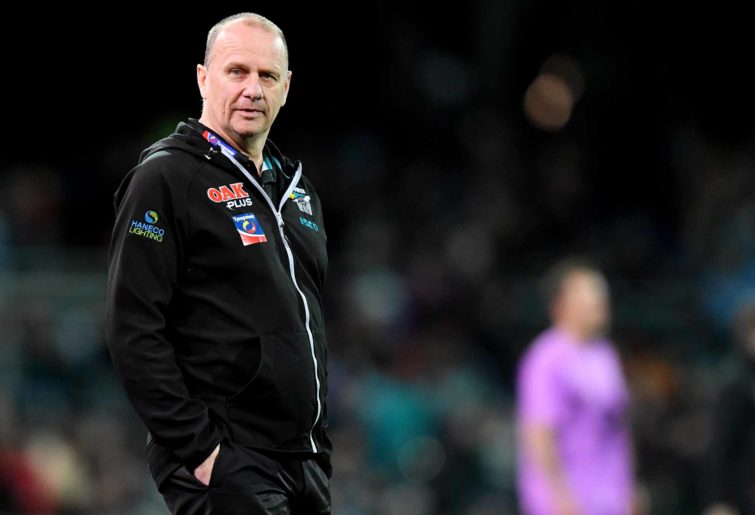 Unlike Hinkley, Goodwin has finals wins in his favour as recently as 2018, and has a contract extending until the end of 2022.

Like Hinkley, his position won’t be tenable unless his side makes a material improvement in 2020.

Why did Goodwin’s Dees struggle so badly in 2019? As our own Adrian Polykandrites suggeted last Monday, injuries played a massive role. If you want to sum it up in a single number: Melbourne reported at their AGM earlier this month they forked out $600,000 over their budgeted amount in injury payments last year.

In particular it was inside the arcs where Melbourne got hit the worst, unable to cobble together any semblance of continuity the back or forward lines. They dropped from having 2018’s ninth-best defence and best attack to being second-worst (ahead of Gold Coast only) in both categories.

The Demons responded to the crisis by hiring revered fitness guru Darren Burgess, who aside from stints with Port Adelaide during some of their best years (2004 and 2012) was most recently the top fitness boss at Arsenal and has previously worked with Liverpool and the Socceroos.

You have to admire the proportion of response: they had an injury problem, so they hired the most credentialled person the industry has seen to work in that area. And – touch wood – with the exception of a minor Max Gawn knee injury, everything seems to be running smoothly so far.

However 2019 also exposed a derth of quality ball-moving talent. They experience contested possession and clearance numbers not too disparate from the year prior – when they had been No.1 for both – but when it came to intercepts, the source of the best ball movement in the modern game, they dropped from third in 2018 to 11th.

Jordan Lewis, Neville Jetta and Oscar McDonald were the intercept kings in that 2018 season, taking possession back off the opposition 383 times across the home-and-away season. In 2019, through struggles with fitness and form, their combined tally dropped to just 103.

The flow-on effect saw Melbourne drop from being the AFL’s best side for metres gained to a lowly 13th in 2019 – and of course, with their forward line so depleted, they struggled to make good use of what territory they could gain.

Again, the Dees looked for a solution. It came in the form of two new wingers, Ed Langdon and Adam Tomlinson.

Langdon was 14th for metres gained last year, and top 100 for intercept possessions. Tomlinson didn’t crack the top 100 for either stat – but expect that to change as he gets an opportunity to settle in the wing role.

Port Adelaide, like Melbourne, found a lack of forward firepower to be a major issue. The Power did a lot of things right in 2019, but just didn’t make the most of their opportunities once they entered forward 50.

Port were second only to Geelong for the number of tackles they applied per minute to their opposition, and no doubt this pressure influenced one of their other major statistical achievements – No.1 for intercept possessions in 2019.

Their ability to intercept also fuelled an ability to drive the ball forward, and their match average of 58.1 inside 50s was the highest of any club in the league – nearly two per game ahead of the next-best Western Bulldogs.

However for all their entries, Port could not generate goals. They scored a goal from one in five inside 50s, the fourth-worst in the league and ahead of only Fremantle, Gold Coast and Melbourne.

Part of the responsibility for this no doubt lies with those delivering the ball inside 50 and the quality of entry they are providing. But, it’s clear that a lack of cattle is a major issue for the Power when it comes to goalscoring.

Connor Rozee’s debut season was simply marvellous, but the fact that a first-year player’s 29 goals was enough to secure the club’s leading goalkicker award is an indictment of the existing forward talent.

Of Port Adelaide’s top five goal-kickers (a club you only needed 13 goals to join), two of them – Sam Gray and Paddy Ryder – left Alberton at the end of the year.

Port need forwards to go forward. The good news is that their drafting over the last two years has clearly been designed to address this issue.

Of the 2018 crop, Rozee and Zak Butters were both prolific underage goalkickers who have now proven their wares at senior level. Xavier Duursma, while more of a midfielder, is at least a midfielder who kicks goals, and certainly knows how to celebrate one. 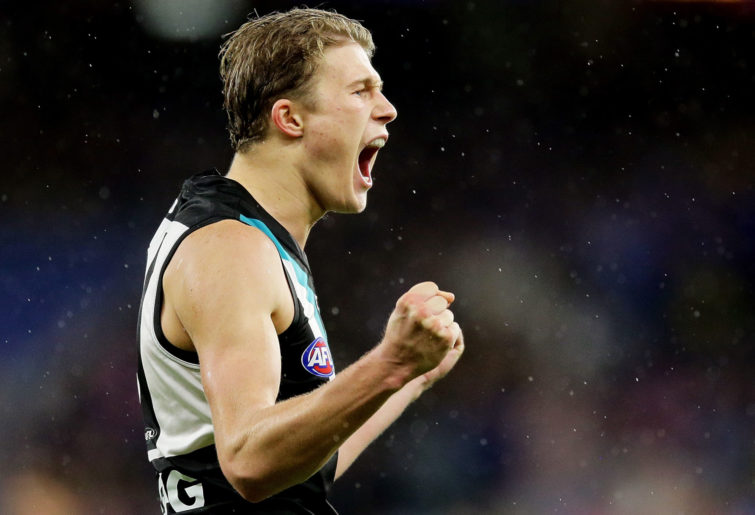 Their first three picks of the 2019 draft – Miles Bergman, Mitch Georgiades and Dylan Williams – are all forward-half players as well.

Georgiades is a key forward who can be a longterm partner with Todd Marshall, Williams a prolific mid-sized goalkicker, and Bergman probably the most exciting of the lot as a tall flanker with real speed and creativity.

The question on Hinkley’s mind has got to be whether or not this new generation of goalkicker can have an impact quickly enough to push him into finals. The odds, unfortunately for him, are unlikely.

The Rozee-Butters-Duursma trio had a great impact in their debut year but such early impact from draftees is rare, and often followed by a second-year plateau. This year’s draftee crop, too, is probably less prepared to have the same kind of early contribution.

Instead, perhaps Hinkley’s best hope can be drawn from some of the standout performers of his first preseason match: Charlie Dixon (four goals, three behinds) and Steven Motlop (three goals, 22 touches).

The caveat is that Dixon is 29 but has only played 20 games in a season twice – albeit those two occasions being fairly recent, in 2017 and ’18 – while Motlop is no stranger to good form but certainly has an on-again-off-again relationship with it.

If one of them pulls out a career season then it just might be enough to earn Hinkley a 12-month reprieve. Or perhaps the kids will outstrip all expectations.

But, to sum it all up for Ken: the balance of probability is not in his favour.

Like Hinkley, Goodwin has some good news coming out of his first preseason game. In particular, the form of Christian Petracca was simply breathtaking, and probably the biggest talking point to come out of the weekend.

The former No.2 pick has been labelled a tease at times, but he’s only recently turned 24 and missed his entire first season with an ACL injury. Late bloomers are a real thing and there’s nothing wrong with being one.

A Petracca emergence in 2020 would add some mint choc-chip to a Melbourne on-ball brigade that is otherwise very vanilla, though it will mean other players must continue to look for roles where they can have an impact.

Melbourne also saw three goals from former Cat and Bomber Mitch Brown, who won’t star but can play a structural role in their forward line, and No.12 draft pick Kosi Pickett, who kicked a goal and laid three inside-50 tackles.

Anchoring their other high draft-pick, Luke Jackson, to the forward line – for a return of five touches and no scoreboard impact – is an experiment that leaves me sceptical. While he could turn out to be the 198cm Scott Pendelbury, one can’t help but feel Hayden Young or Dylan Stephens would have directly adressed more pressing needs.

Still, if I were Simon Goodwin, I’d be feeling the first half of my last name about season 2020 ahead. Whether the Dees are a top-eight team again or not remains to be seen, but a return to at least middle section of the ladder seems likely, and that’s all he needs to stay in the game.

Of course, that’s the beauty of a preseason. What offers optimism is gospel and what provokes concern can go comfortably ignored (it is, after all, only preseason).

When the rubber meets the road we’ll find out what’s real and what isn’t.