This is the final article in a five-part series that looks at graphical representation and assessment of AFL club list age profiles and features a novel graph coined an ‘Earlgram’ explained in Part 1.

Part 1 introduced AGP-Earlgrams that show AFL club 2020 list age histograms with a colour superposition based on how many AFL games each player played in 2019 (referred to as an AGP score). AGP-Earlgrams are based on a single year’s output and are not necessarily reflective of teams’ best possible 22 due to the effect of injuries.

AGP score was used originally largely because the data is readily accessible. This article looks at other metrics that might be used to assess a player’s value, but because the relevant data is more time-consuming to compile, only Hawthorn is analysed as a test case.

AGP score as a proxy for player value rewards recent output at the expense of longer-term performance as it penalises for injury in that particular year. This article introduces a second method that assigns a colour based on a calculated variable called selection probability (referred to as an SP score), which does not penalise teams heavily affected by injury and reflects more closely a team’s best possible line-up.

For players not selected at AFL, their absence at VFL level is used as a proxy for injury. If a player is playing in the VFL, it is assumed they aren’t best 22 and not injured. The SP formula is essentially (AFL games) / (AFL + VFL games). Only data from weeks in which both the VFL and AFL teams played are included. A player’s SP score is not adversely affected when they are a non-VFL-playing AFL emergency as no VFL game is added to the denominator.

The variable is not perfect and certain scenarios could distort a player’s SP score. One example would be a star player’s score being unfairly lowered by VFL appearances when regaining fitness after a long-term injury lay-off. 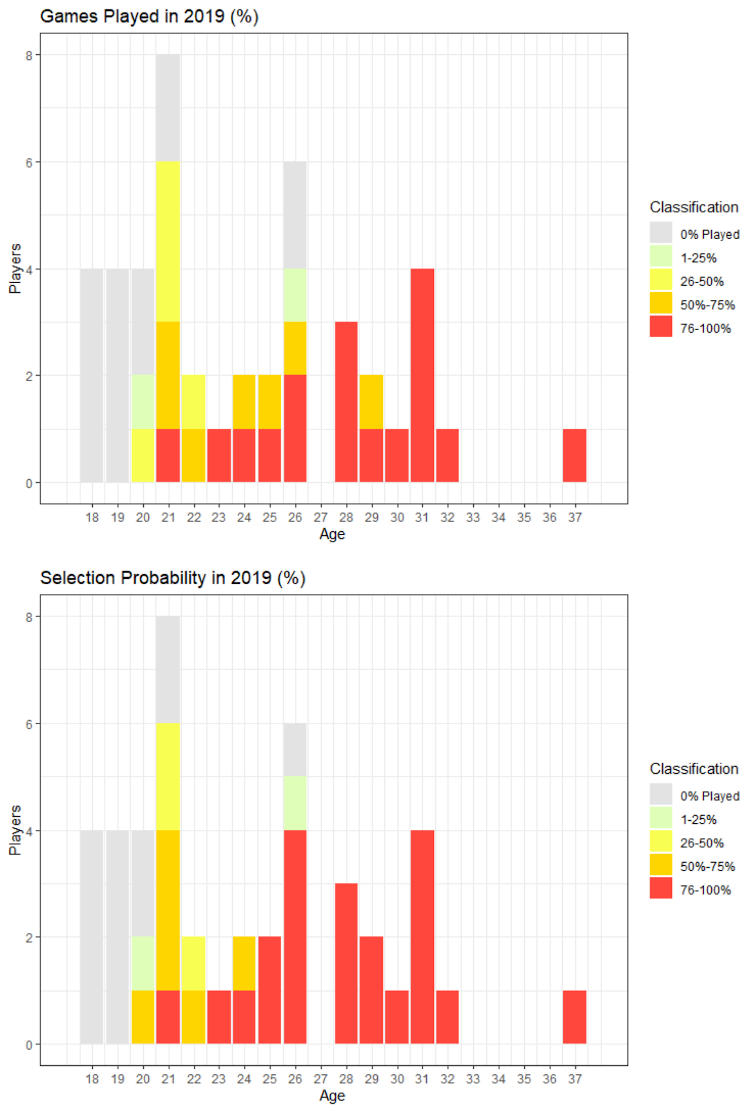 Figure 9 compares Hawthorn’s 2020 AGP-Earlgram to its SP-Earlgram. It should be noted that Hawthorn has two players, Tom Mitchell and new recruit Jonathon Patton, who played zero games at either level in 2019. Mitchell is arguably Hawthorn’s best player and is assigned an SP score of 100 per cent. Patton’s injury history makes him an unknown quantity and he is conservatively assigned an SP score of zero.

Sixteen of Hawthorn’s list played regular senior football in 2019 – about league average in 2019 and below what is typical for a premiership side – and the club has also added Sam Frost, who played in every game last year at Melbourne. Of these 17 senior players, 11 are aged 28 or above, suggesting there remains a heavy reliance on older players, which is obviously not a desirable position to be in.

Hawthorn has 21 one players with an SP score in the 75 to 100 per cent range, which suggests that with a reasonably low injury run in 2019 having at least 18 players achieve an AGP score in 2020 is eminently achievable, this being a key number shared by three-quarters of premiership sides over the past 12 years.

Generally the aesthetic of the SP-Earlgram will almost certainly be improved relative to the AGP -Earlgram as all teams have injuries.

Twenty-five Hawthorn players have an SP score in excess of their AGP score – that is, their absence at senior level was more frequently due to injury than non-selection. Those with a discrepancy that changes their classification colour are Tom Mitchell (26), Chad Wingard (26), Tim O’Brien (25), Jack Scrimshaw (21) and Jonathon Ceglar (29). Compared with the AGP-Earlgram, the SP-Earlgram elucidates Hawthorn’s investment in developing a new core in the 25-26 age bracket and presents a more favourable view of future prospects.

No 2020-listed Hawthorn players have an SP score below their AGP score. This is possible when non-injured depth players play an appreciable number of games at senior level as well as at VFL level. Though not included here due to retirement, this was the case for Jarryd Roughead, who played seniors in the first half of the season, was dropped and then played out the season in the VFL.

It is important to note that this variable reflects a player’s value to his club. This is not necessarily representative of how good he actually is in a league-wide context or of his longer-term future potential. Perhaps a calculated variable that composites SP for intrinsic value to team line-up, average Supercoach/Dreamteam score for quantifiable gameday contribution and draft position for players in their first two years for future potential could yield meaningful results.

AFL-starved fans have been offered a glimmer of hope by Essendon chief executive Xavier Campbell, who is confident that the premiership season will restart by July at the latest following the coronavirus shutdown.