So before the preseason has wrapped up, here’s a look at ten players who could take out the award in 2020.

Nat Fyfe – Fremantle Dockers
The Dockers skipper already has two Brownlows to his name (2015 and 2019) and will be in the hunt for a third in 2020. Last season Fyfe racked up the awards, he captained the 2019 All Australian team and won his third Best and Fairest for Fremantle.

Additionally 2019 for Fyfe was career best in regard to disposals, where he averaged 29 disposals a game. An elite player of the competition Fyfe will be in contention once again to take out the award.

Pat Cripps – Carlton Blues
He has been the standout player for the Blues and has improved with each passing season. Cripps is a major ball winner despite playing in a team which struggled to find the ball.

Cripps has not averaged under 20 disposals a game since 2014, which was his first season in which he only played three games.

Cripps in 2019 averaged 28 disposals a game, received an All Australian selection and won the Blues’ Best and Fairest in the process. Cripps came third in last year’s Brownlow and will be looking to go one better in 2020.

Dustin Martin – Richmond Tigers
Martin over the past few seasons has been building up a nice CV for himself. He’s a two-time North Smith Medalist, three-time All Australian, two-time premiership player, two-time Richmond best and fairest and a Brownlow Medalist.

Despite making his debut in 2010, he collected of all those awards in 2016 or after.

He’s emerged from being a good player to one of the competition’s best. Having come off an impressive season in which he averaged 26 disposals, kicked 32 goals and won a premiership, Martin will look to back up that form again in 2020, form which could have him add another Brownlow to his trophy cabinet. 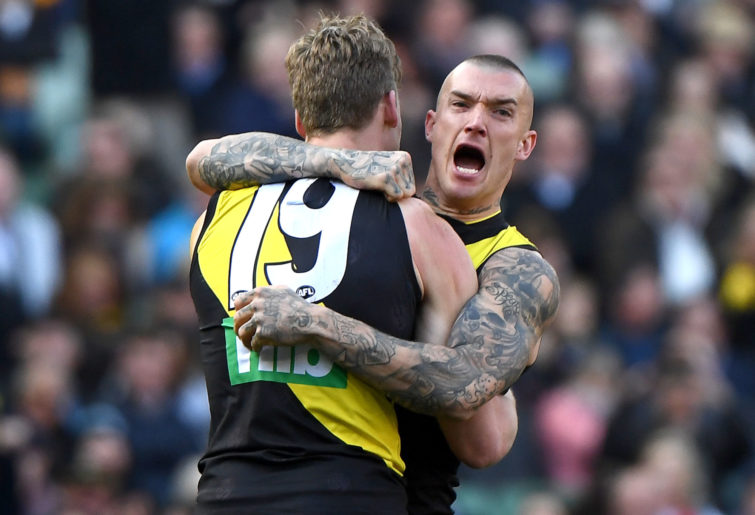 Patrick Dangerfield – Geelong Cats
Dangerfield is among the competition’s best midfielders. While unquestionably a good player during his tenure at the Crows (2008-2015) he’s elevated himself to an elite player since his move to Geelong.

Yet to average under 27 disposals a game since his move to the Cats, he is a major ball winner though his efficiency at times can be poor.

He’s been a consistent performer throughout his career having only been excluded from the All Australian squad team three times in the past ten seasons.

Having won the Brownlow in 2016, Dangerfield should be in contention to collect another in 2020 if he can back up the form he’s shown since his move to the Cats.

Tom Mitchell – Hawthorn Hawks
Having spent the entirety of 2019 on the sidelines through injury, Mitchell will want to hit the ground running in 2020 if he is to be in contention for the Brownlow. Since his move to the Hawks across from the Swans, Mitchell unbelievably has not averaged under 35 disposals a game.

He led the league for disposals and took out the Hawks best and fairest in his first two seasons at the Hawks as well as being part of the All Australian team.

Like many others on this list Mitchell has previously won a Brownlow, winning in 2018. If he can return to the same level as his last season of football expect Mitchell to poll votes.

Lachie Neale – Brisbane Lions
Emerging into an elite player, Neale is a major ball winner who hasn’t averaged under 27 disposals a game since 2014.

Part of an underperforming Dockers side, Neale was one the few standouts during tenure in which he led the league for disposals in 2016 and won the club’s best and fairest twice (2016 and 2018).

Now an important part of the Lions, Neale who came third in the Brownlow last year could go one step further in 2020.

Marcus Bontempelli – Western Bulldogs
Bontempelli is coming off a career best season in which he averaged 26 disposals, won the Bulldogs best and fairest, was voted by the coaches as player of the year and earnt himself his second All Australian team selection.

Since his debut in 2014 he had an immediate impact for the Bulldogs and if he backs up his 2019 form the newly appointed Bulldogs captain should be in contention to take out the Brownlow in 2020.

Tim Kelly – West Coast Eagles
Entering the AFL scene later than most at age 23, Kelly has been worth the wait.

Immediately bursting onto the scene since debuting for the Cats in 2018 was awarded the best first year player and earnt his first All Australian team selection last year.

Averaging 25 disposals and kicking 24 goals though playing predominantly through the midfield, Kelly who placed fifth in last year’s Brownlow should contend once again in 2020, which would be great introduction in his first season at the Eagles.

Brodie Grundy – Collingwood Magpies
Possessing great athletic ability for a ruckman, Grundy has been proven to be a rare commodity in the competition hence why the Magpies penned a seven-year contract to retain his services.

A career-best season for disposals (21 disposals per game) and hit outs (43 hit outs per game). If he can back up his form from 2019 Grundy could be the first ruckman to poll the most Brownlow votes since Corey McKernan in 1996, hopefully Grundy will be eligible to claim it unlike McKernan. 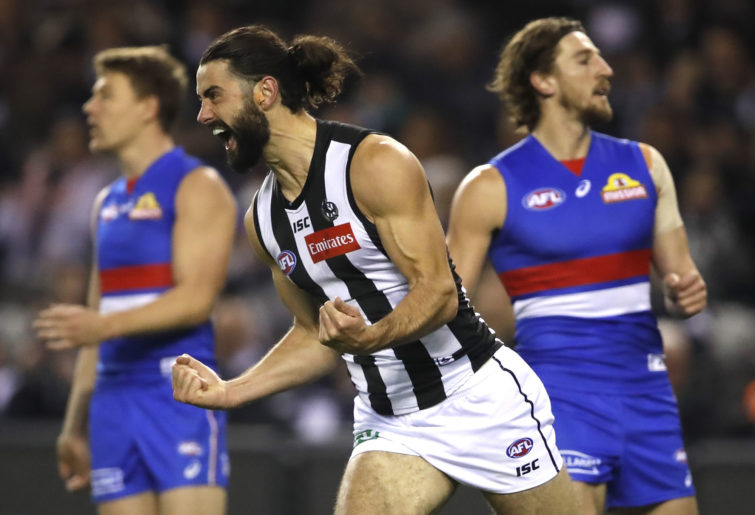 Lachie Whitfield – GWS Giants
In recent seasons Whitfield has stepped up and is starting to show why he was taken with the number one pick back in 2012.

Making a name for himself as a running halfback, Whitfield has shown that he can be impactful in the midfield, which if you want to win a Brownlow in the modern game seems to be part the criteria to win the award.

Averaging 28 disposals last year which was career best, if he steps up once again should contend for the Brownlow in 2020.