The Australian surprise packets after the first month

Hard to believe, in the first week of March, that we’ve already had a full month’s worth of Super Rugby, but here we are heading into Round 6.

After a month’s worth of rugby, it’s a reasonable body of work to start looking back on a few players to have stood out over the first five rounds.

In the context of Australian rugby and the very obvious rebuilding phase currently underway after what was probably the post-Rugby World Cup exodus with the biggest impact since the dawn of the professional game, this has been a most enjoyable development.

Upfront, none of what follows is a suggestion of Wallabies readiness; it’s the first week of March, after all. But good form early in the season is certainly better than the alternative.

The Under-20s graduates
It’s probably a bit unfair to group these guys all in together. But when I first started writing down names, I realised that rather than the names themselves, the bigger headline was the fact that arguably the most intensive Junior Wallabies program ever run – and certainly the most successful, in terms of U20s World Championship success – has yet again produced the goods.

We got a taste of this during the NRC last season, the first chance for the young guys to take their next step up in class. But the step so many of them have taken into Super Rugby already means there’s cause for wider recognition for this program.

The fact that these guys have started so well will give the coaches confidence the next junior they’re thinking about playing is also ready to go.

Bell already looks like he could be anything and he’s still only 19. Front rowers aren’t supposed to be that mobile and that skilful, but more important that all of that, his scrummaging work is already very solid. He’s the sort of guy the Waratahs could build a pack around in the coming years.

Harrison and Nawaqanitawase haven’t had everything go their way, but they’ve kept persevering and backing themselves to succeed, which is equally admirable. Nawaqanitawase is very clearly that big-bodied, good-finishing blockbusting winger the Tahs have lacked since Taqele Naiyaravoro disappeared as quickly as he appeared. 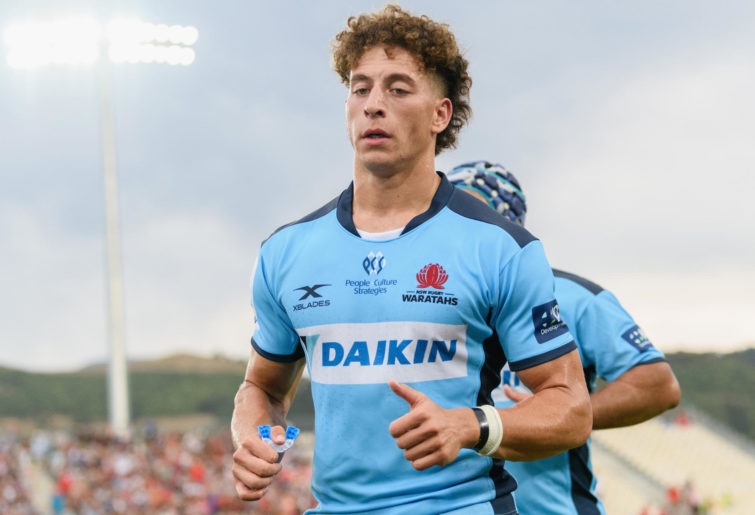 Mark Nawaqanitawase of the Waratahs. (Photo by Kai Schwoerer/Getty Images)

And I’m just glad the Waratahs have stuck with Harrison when the temptation – and even some of the commentary – suggested Kurtley Beale would move to flyhalf. If the Tahs can accept that they won’t win a title this year and may not win one next year either, but that Harrison is the guy to lead them forward for the next few years, then he’ll be in a better place as a player and the Waratahs will be in a better place as an organisation.

Harrison will be there in two seasons’ time. Will Beale?

The Queensland backrowers are performing outstandingly well, and already the calls are there for McReight to start with skipper Liam Wright moving to the blindside.

I’m not so sold on that just yet, mainly for the fact Angus Scott-Young gets through a mountain of work that would be hard to replace. And besides, there’s plenty of positives to be had in McReight continuing to provide impact off the bench.

Hell of a problem for Brad Thorn to have, regardless.

Lolesio has certainly been the pick of the young flyhalves to date, and while plenty have been said about the way he steered the Brumbies around in Hamilton in their really impressive win over the Chiefs, I actually think he might get more in the short term at least out of the narrow loss at home to the Highlanders the week before.

Noah Lolesio of the Brumbies. (Photo by Tracey Nearmy/Getty Images)

It’s going to be in adversity that a confidence player learns the lessons they need, and there’s no doubt Lolesio had a hard time of it that night.

I wasn’t 100 per cent sure he was first choice during the preseason – and I know Bayley Kuenzle impressed the Brumbies coaches every time he got a chance to lead the team – but he’s well and truly in front now. It’s up to him how long he keeps hold of the Brumbies no.10.

Andrew Kellaway
I’m sure I wasn’t alone in reacting to the news Kellaway was returning to Australia and had signed with the Rebels with a somewhat dismissive, “oh yeah, we’ll see.”

After never really making the grade with NSW, Kellaway spent time in the English Premiership and played in New Zealand’s ITM Cup last year. At the ripe old age of 25, Kellaway was building the solid foundations for a journeyman career.

But his first month in Melbourne has been one of few highlights for the Rebels through the first five rounds, with the rediscovery of his ability to find the try line a definite standout.

I’ve not been ranking them, but there would be a decent argument to be made that Kellaway’s five tries in as many games has to put him among the form wingers in the comp, never mind the Australian conference.

If going to the other side of the world is the spark for Kellaway to rediscover the ability that built plenty of anticipation around him as a junior, then I look forward to seeing the benefits.

Hunter Paisami
The loss of Jordan Petaia was a massive downer, and I’m still not sure James O’Connor is the answer at 10, but one of the big wins within the Queensland Reds’ midfield shuffling has been the sudden emergence of the hard and straight-running Paisami.

He never quite made it after a couple of seasons in the Rebels set-up, and made the move up to Brisbane last season, finishing a good year of club footy with a strong showing with Brisbane City in the NRC. He probably wasn’t much on the radar at the start of the Super Rugby season, but he will be for the rest of it after quickly emerging as the midfield lynchpin in Petaia’s absence.

Ryan Louwrens
A late call-up to start a couple of weeks ago gave Louwrens the shot at the Rebels no.9 he wanted, and in the couple of outing since, it’s already hard to see how Fijian international Frank Lomani usurps him, presuming he’s allowed to play again soon.

Injuries cruelled Louwrens career at the Western Force, but he’s found form and fitness again in Melbourne after a stint in Japan.

His pass is slick once again, and he’s providing the Rebels with different service and different options than Lomani would have. But considering he played just 24 games in three seasons in the west, it’s just great to see him playing again, never mind playing so well.