As an AFL fan, I’m not often jealous of rugby league diehards. We have higher scoring, we have bigger crowds, we have slightly less salary cap scandals. But there is one thing the NRL has which every AFL fan should lust over, and its name is Origin.

I was probably born too late (and certainly did not quickly enough fall in love with footy) to appreciate the era where AFL Origin was a thing.

And so, when Friday’s Bushfire Relief fixture was announced, I hungrily snapped up a ticket, eager to peer through a window into the past.

The match ticked some of the most important boxes on the list for good footy: the players were of elite quality, the scoring was plentiful, and with teammates playing against each other – or old friends reunited – the potential was there for narratives to follow.

The highlight of the night was undoubtedly Dustin Martin. Whether or not he was genuinely best on ground, you can’t fully appreciate his brilliance until you hear that ripple of anticipation in the crowd when he gathers the ball in range of goal.

Unfortunately, the Dusty hype was about the only on-field development that threatened to breathe life into a barren atmosphere at Marvel Stadium.

More than 50,000 fans turned out but no one was living or dying on whether the Big V got up, and it was an evening punctuated by smatterings of polite applause rather than the passionate cheers of a rusted-on home crowd.

The players were no more invested in the outcome than the fans. While there were one or two good hits, defensive play was scarce, and a more perfect example of bruise-free footy would be hard to come by – which was hardly unexpected, but disappointing all the same.

The most memorable moment of the match didn’t happen on the grass but was instead a five-lap Mexican wave during the third quarter – a moment of fun that made me glad I made the effort to attend on an evening where, if I’m being honest, not a whole lot else did.

Over the past three years in particular I’ve had the opportuntity to work on every NRL State of Origin game with the editorial team at The Roar, and the difference in the sense of occasion between this and that is a chasm of remarkable size. The passion and parchoalism of NRL Origin is hard to match. 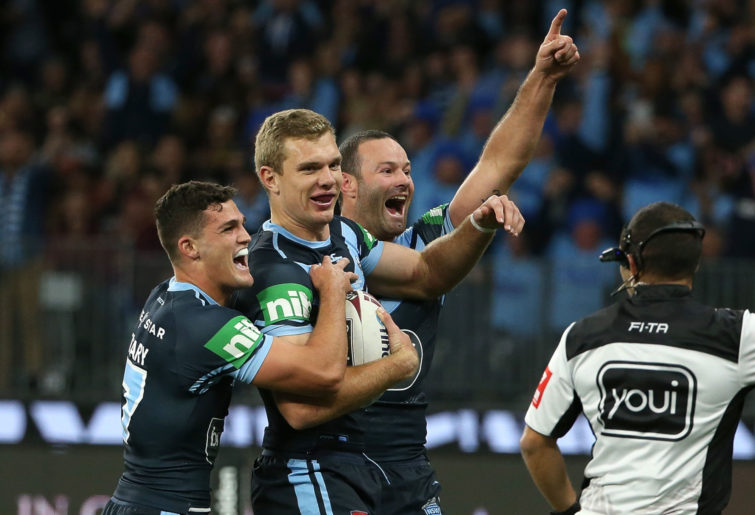 It provides essentially another two to three grand final-calibre events on the NRL calendar and one must imagine Gillon McLachlan drooling like Homer Simpson would over donuts at the thought of seeing similar success from an annual equivalent.

Fans and some players would love to see it happen. Picture Nat Fyfe and Lance Franklin leading Western Australia against the star-studded Vics. Tickets would sell like toilet paper in a Coronavirus scare.

But there are more than a few barriers between us and that beautiful vision.

Firstly, the ‘All Stars’ concept has to be thrown in the bin. Sure, there’s plenty of interstate fans who are happy to barrack against the Victorians, but that sentiment isn’t strong enough to build an enduring team around. It made a kind of sense for a one-off charity game, but a return to genuine state competition is the only way forward.

Here however is where the AFL runs into one of the most hairy problems. Unlike the nice, straightforward NSW versus Queensland dichotomy of NRL, the Australian code has three strong states to fit into a fixture and this inevitably creates complications.

I’ve seen at least half a dozen pitches for how an AFL Origin fixture could work in the days since the Friday match was played. Personally, what I think would work best is an annual best-of-three series rotating between the three big footy states – so Victoria vs Western Australia with SA sitting out one year, then SA vs Western Australia the next, then SA vs Victoria, and so on.

Tier-two matches – between Tasmania, NSW-ACT, Queensland and the Northern Territory – could be played as part of double-headers or as separate events in their own right, and ditto for AFLW Origin matches.

Each side could have one home game in the series and the third travel to different venues around the nation.

However the biggest hurdle remains convincing players to represent their state with the same – if not greater – passion that they would represent their clubs, and convincing the clubs to let their players do exactly that. Fear of injuries in the 1990s proved the death of the concept and may well leave a revival stillborn.

Certainly the league’s biggest names were happy to get around the cause on this occasion and the clubs publicly supported them in doing so. But if a 2021 Origin fixture can boast only the same low level of intensity as Friday night, I doubt even half the crowd would bother fronting up again.

Of course, what hasn’t been acknowledged enough in the debate surrounding this match is that its purpose was not to revive Origin, but to raise funds for bushfire relief and pray tribute to those who fought the fires this summer – two goals which it achieved with wholesome and resounding success.

It inevitably brought to the surface again what remains one of the great ‘what if’ debates of the AFL industry. Enamouring as it is, I remain sceptical we will see Origin make a permanent and meaningful return to the calendar any time soon.

Perhaps we are doomed to always be a little jealous of our rugby league-loving cousins.