How the Waratahs' youngsters are making a difference

Pressure, pressure, pressure. At the professional level of the game, Australian rugby is under tremendous pressure – greater than at any other time since rugby changed forever in 1995.

The cause of that pressure is principally economic in nature. Clubs in the north and Japan can guarantee packages which offer veteran players financial security after they retire. They have the money to invest from a combination of wealthy benefactors, ever-improving broadcasting deals and, latterly, a huge cash injection from private equity company CVC.

The accelerating migration of veteran players from Australia has ripped the heart out of the Waratahs in particular. At the end of the 2019 Super Rugby season, they lost Sekope Kepu, Tolu Latu, Tatafu Polota-Nau, Will Miller and Michael Wells up front, and Nick Phipps, Bernard Foley, Adam Ashley-Cooper, Curtis Rona and Israel Folau in the backs.

That represents a massive 535 Wallaby caps lost. Three of the Tahs went to the same club in England, newly promoted London Irish, who also picked up Adam Coleman from the Rebels just for good measure.

What were they replaced by? Tetera Faulkner’s four Wallabies appearances in the front row, and Jack Maddocks’ seven caps in the back three. The other spots were filled by a mixture of journeymen and youngsters.

One can be forgiven for believing that new head coach Rob Penney was on a hiding to nothing, right from the very start.

In reality, the picture is not quite as bleak. While the economic imbalance between the hemispheres is not likely to change, with CVC looking to push the Six Nations tournament off terrestrial TV and fortify it behind a paywall, pull up the corner of the rug and you find the on-field picture is surprisingly rosy.

At the Waratahs, the haemorrhaging of veteran experience has encouraged early investment in the emerging products of last year’s successful Junior Wallabies. Props Angus Bell and Darcy Breen, back-rowers Carlo Tizzano and Pat Tafa, scrumhalves Michael McDonald and Henry Robertson, flyhalf Will Harrison, centre Joey Walton and back three players Mark Nawaqanitawase, Ben Donaldson and Triston Reilly were all selected for the 2019 Under 20s World Cup.

Seven now feature in the NSW senior squad, with the other four in the development squad. Two (McDonald and Tizzano) came via Perth, having made their Global Rapid Rugby debuts in the Western Force’s 42-10 win over the Asia Pacific Dragons.

Three already look set to cement their positions as regular starters in sky blue by the end of the season – Bell at loosehead prop, Harrison at number 10 and Mark Nawaqanitawase on the wing. They may even earn a shot at Dave Rennie’s first Wallabies selection in July.

This fast-tracking of young talent depends on Penny and his coaches creating a playing style and modelling gameplans which suit their talents. That accelerates the curve of development.

In an article a couple of weeks ago, I examined how the Waratahs fell down in the wet against more mature opponents. This last weekend against the Lions in the dry, they experienced no such problems.

A team with a high proportion of younger players tends to struggle with areas of physical and technical control like the breakdown. As a result, there is a looser character to play, and more emphasis on the offloading game.

This is the emphasis which Rob Penney and his support coaches chose to imprint in the match against the Lions. They managed the point of contact as much as possible through use of the offload rather than by keeping the ball and setting a ruck.

The Waratahs’ pass to ruck ratio was three to one, whereas in the recent England-Ireland game from the Six Nations, the combined ratio of both teams was only half of that, at 1.5 to 1. That is typical for international rugby.

This gameplan gave the likes of Bell, Harrison and Nawaqanitawase the freedom of expression they needed, and they blossomed. The Tahs set out their stall right from the beginning of the game:

Nawaqanitawase stands up in the tackle and offloads to Kurtley Beale, Beale offloads to Michael Hooper, and Hooper gets his arms over the top of the tackle to deliver the ball to Jake Gordon when it looks like he has to surrender to the inevitability of a ruck.

Will Harrison drops the ball, then Nawaqanitawase picks it up and makes another offload to Jack Maddocks near the right touchline to continue the move.

The sequence as a whole illustrates both how effective the offload can be when the ball-carrier is able to stand up in contact and free his arms, but also the potential pitfalls in the loss of ball control by Harrison. The risk-reward ratio is much higher than it is in the ruck control scenario.

The offload was a key ingredient in each of the Waratahs’ first two tries:

In the first example, Hooper breaks the low tackle to unload to Angus Bell, in the second (at 1:21 in the video) Karmichael Hunt is able to get his arms over another low tackle attempt to free Maddocks and Jack Dempsey on the outside with a pass out of the back of his right hand.

The use of the offload brought the best out of Nawaqanitiwase, Harrison and Bell. Here are the three young tyros in concert:

It is Nawaqanitawase who first unlocks the defence by picking out Beale with another over-the-top offload when nothing seems to be on: 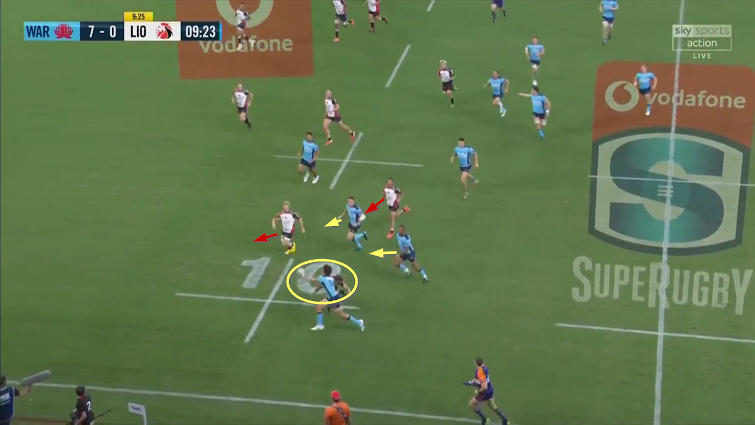 Nawaniqanitawase is a tall winger at 6’4, and the simple expedient of extending the arms out in front of the tackle as the defender dips keeps the ball available. The Lions have the numbers, but their tackling technique cannot prevent the flow created by a pass in contact.

Will Harrison does the rest by picking out Bell in stride with a nice long pass off his left hand. You can watch how the move was converted into the full five-pointer at 0:47 on the highlight reel.

It was especially encouraging to watch Harrison rebound from a difficult night against the Rebels with such a strong performance on both sides of the ball.

As Rob Penney noted afterwards, “Will’s mental toughness and resilience, call it what you want, to go out and perform like he did today on the back of a couple of tough performances, shows the level and depth of his character, which is great for the future.

“It doesn’t mean he’s a finished product yet, but it’s a great comeback from where he was maybe last week.”

As the game wore on, Harrison became more and more confident in his ability to take on the South African kick-chase:

The sharp cut off his left foot to beat a tackle features in both instances, but what I particularly like is his urgency to win the fight on the ground and present ball as quickly and accurately as possible at the end of the second example. That is the sign of a combative and intelligent player.

Just as positive was Harrison’s rather less highlight-reel-worthy involvements on defence:

In the first part of the sequence, Harrison has launched a high kick which gives him and Michael Hooper every chance to lead a successful counter-ruck on the receiver.

When the Lions recovered the ball fortuitously from that situation, Harrison is already back in position on next phase to fold over the tackle ball with Nawaqanitawase and draw the penalty.

The most apt summary of the Waratahs’ performance can be viewed at 2:24 on the highlight reel. Hooper forces a fumble in the tackle and comes away with the ball, Alex Newsome and Kurtley Beale avoid setting the ruck at 2:37 and 2:39, there are five passes in contact (and one drop) in the sequence as a whole.

Harrison breaks off his left foot to set up the final chance with another offload out of the back of the hand. Appropriately enough, the try is converted by another youngster, 21-year-old wing James Ramm in the left corner.

The game was a flag planted in the ground for the unbridled optimism of youth and the game which knows no fear. It was a pleasure to see it succeed, for once, in the percentage play-dominated professional era.

Summary
A couple of short weeks ago, the deficiencies of Rob Penney’s youthful charges were brutally exposed in unkind weather conditions. Against the Lions, they felt the wind at their backs – but this time, no rain.

The full width of the Waratahs’ ambitious attacking gameplan was unveiled, and the likes of Angus Bell, Will Harrison and Mark Nawaqanitawase thrived. The men in sky blue passed and offloaded in the tackle and set a mere 53 rucks in a game where they ran for a total of 486 metres, off less than 40 per cent territory and possession of the ball.

An average of nearly ten metres per run is unusually high in the modern game.

The fast-tracking of players like Bell, Harrison and Nawaqanitawase into the professional breach may yet work to Dave Rennie’s advantage in July. They may not have the caps, but they also do not have the weight of losing experience that became such a burden for their recent forebears.

With the under 20s, they learnt how to win their games in 2019 (at least up until the Junior World Cup final) and they will have no fear of trying the things that worked for them so well then, now and in the future.

It may not work every time, but at least there is hope for Australian rugby coming through in the vibrant green shoots in a new generation of young players. The rest of the world can look after itself. For now, it’s Advance Australia Fair.