Super Saturday has come back around again for yet another meeting full of fantastic Group 1 action.

The feature is the Australian Cup, where Avilius is a $4 favourite and the Newmarket Handicap where superstar three–year-olds Bivouac and Exceedance hold joint favouritism. The time-honoured Kewney Stakes accompanies the features, along with two other Group races. Let’s get cracking!

Race 1
We kick off the program with a Group 3 for the two-year-olds down the straight over 1200 metres. This isn’t a race I’m overly keen to invest in, but if you have enough courage early in the day I would be looking past the favourite in Muntaseera. She’s a winning chance but the even odds are just too short. Jyoti has looked good in her three runs to date, culminating with a listed level win in Tasmania last start. In a race devoid of any speed she could just pinch it out in front. Geist is another with a good chance. She was never going to win the Blue Diamond Preview when they went slow in front over 1000 metres, before finishing alongside Muntaseera in the Prelude after travelling wide and without cover. She should be shorter than what she is at the moment. Incredulous Dream had a brilliant last 200 metres at Bendigo on debut to win by a neck, but it’s hard to gauge how she will go considering this is a big step up in grade.

Race 2
The Sires Produce over 1400 metres at Group 2 level is the next race to analyse. In a very open race, I’m backing two at odds who I think is being overlooked in the market. Albukhturi was very good on debut when having no luck in the run. He undoubtedly should have won the race, after having a chequered passage in the straight and legitimately never seeing daylight until the race was over. He only finished half a length off them there, the 1400 metres suits and as long as he can build some momentum, we should see a pretty good finishing burst out of him. I’m happy to have something on the other Hayes runner in Surooj. She was a good winner over 1100 metres on debut at Bendigo, before running 1.75 lengths off Holyfield who beat Prime Star on debut, who then went on to beat the favourite here last start. She will get a lovely run from the inside barrier (1) and only needs even luck to be in the finish. Larimer Street and Holyfield have similar form lines and that’s why they are solid in the market. I can’t take $3.80 though for the favourite and Holyfield has drawn horrifically (10). 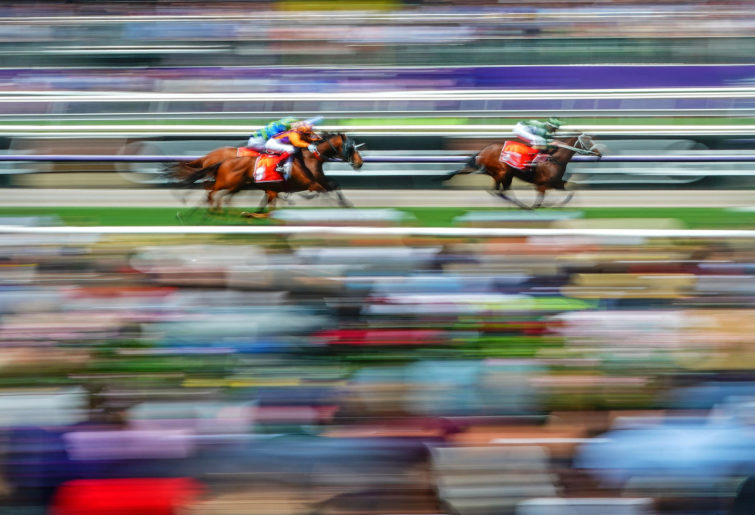 Race 3
A Super Vobis three-year-old handicap is the next on the program, over 1400 metres. It’s a very tricky race, this one. There won’t be much speed on and most of the better horses in it settle back. I’m prepared to have something on Vegas Knight. I’ve been a fan of his for a while now and he found a lot of bad luck last preparation. His best two runs bar his maiden win were at Flemington, and one was on a heavy track, which we might get today. He resumed well at the Valley a fortnight ago and from the inside Gate 1 he should be able to take up a spot behind the leaders and have every chance. Katalin is a good chance. She was completely dominant two back in a Class 1 race at Newcastle, before coming to Flemington and running on well in the Vanity. Being drawn in two isn’t ideal but if she has some luck she will be hard to beat. The Lifeline could run a bold race. He won first-up last preparation and in a race devoid of speed he will be able to do whatever he likes in front. Russian Camelot and Spend are also chances in a very open race.

Race 4
The Matron Stakes over the mile for the fillies and mares is up next. It’s another tricky race on what is a tricky program in general. Bam’s On Fire has been in good form this time in and there’s no reason to suggest she can’t win this. She won well over the talented Jumbo Ozaki three back, before putting in her only sub-par performance two back. She never went straight at Caulfield last start but I’m not sure the track suits her. She maps well from a good gate (2) and gets a four-kilogram weight swing on Spanish Reef who she beat home last start. Spanish Reef is the main danger. She is going for the three-peat in this race and her two runs this time in have been full of merit. She again attacks this race third up where she’s won three from six and she maps to get a lovely run behind the leaders. Outside of those two, there’s a couple of other chances, which include backmarkers Fidelia and Neighbourhood.

Race 5
The March Stakes is the next on the program over 1400 metres. In a day where some of the favourites might struggle, I’m keen to be on Wild Planet and think he’s over the odds at $2.80. His form from last preparation when running half a length off Classique Legend and Fasika reads very well for this race. He resumed at Caulfield over 1100 metres and only warmed up late to finish 2.75 lengths off Anaheed, before getting caught in the wrong part of the track (anywhere but the rail) last start in the futurity, and only ran a length behind Melody Belle. He will get a good run just off the pace and be too powerful late in the piece. There aren’t too many dangers, but Iconoclasm is probably the closest to it. He hasn’t been far away in some Group races and has won three times at this track. Ef Troop has a big query at 1400 metres but maps to get the run of the race, and Debt Agent could run into the placings fresh at big odds.

Race 6
One of the features of the program arrives here in the form of the Newmarket Handicap over 1200 metres at Group 1 level. I’m backing two in the Newmarket and both runners are coming out of the Lighting Stakes. I’m happy enough to stick with Gytrash. He’s an incredibly underrated horse who is now a Group 1 winner. He was superb last preparation when winning four from six, including two of those wins down the straight where he is undefeated from three tries. He resumed with a brilliant win in the Lightning when winning by a length. He will appreciate 1200 metres and is four from five on a soft track so the conditions today suit him down to the ground. I’ll be backing Loving Gaby as well. She’s never really run a bad race and she was a terrific winner of the Manikato last preparation at the Valley. She resumed with an eye-catching third in the Lightning, where she clocked the best last 800 metres of the day. She gets in brilliant at the weights and has no issues down the straight. Halvorsen does scare me, although her soft track form isn’t great. He only got nosed out by Gytrash last preparation and has won three from four this time in. He just got too far back in the Oakleigh but flashed home to run two lengths off them. He can definitely measure up here. Bivouac and Exceedance are the best of the rest.

Race 7
The Kewney Stakes is the next on the program over 1400 metres for the fillies. Another big field here and I want to be on two of them again. Having the larger bet on the favourite in Rubisaki though. She resumed well at the Valley when winning superbly by 2.5 lengths, before holding them off over this track and distance two back. She went to Warwick Farm last start for the Inglis Sprint and dominated some pretty smart types. She maps to get a lovely run and the wetter it gets the better for her. I want to have a saver on Southbank. Last time she was third up she ran a good third behind Acting, before running Flit and Missile Mantra to within a neck in the Thousand Guineas. Her first-up effort wasn’t too bad in the Kevin Hayes and I don’t think she is a horse that is going to perform second up. She draws perfectly (1) to lead and dictate and the wizard from the West could get himself a Flemington winner. Don’t discount Score and Don’ttelltheboss if something injects a lot of speed in the race.

Race 8
The feature of the program has arrived in the form of the Australian Cup over 2000 metres at Group 1 level under weight-for-age conditions. Keen to back two at each-way odds and one of them is Harlem, who is going for a three-peat in this great race. He’s never raced better heading into the 2020 version, having hit the line nicely first up and then having no luck late in the Peter Young when finishing a length off Miss Siska. He will get the run of the race from the gun draw (2) and he should be ready to peak third-up. I’ll be on Regal Power too. He was brilliant when winning the Railway, before blowing them away at Group 2 level in Western Australia. He ran home well on the wrong part of the track in the Peter Young and with a fairer track and stepping out to 2000 metres, he’ll be hard to hold out late in the piece. Kings Will Dream has had a faultless preparation and maps brilliantly from the low draw (1), while Mirage Dancer and Vow and Declare are looking for further but can go well if they get the breaks.

Race 9
As usual at HQ, it’s a very open race to try and get out on down the straight over 1100 metres. As has been a trend in this column, I want to be on two at each-way odds again. I’m happy enough to be in the corner of Li’l Kontra. The outside rail is where they’ll probably be at this late in the day so her barrier (13) suits well. She’s very honest having only missed a place once from 13 tries and she has beaten these types before. She went very well in the Blue Sapphire last preparation after suffering a tough run, before finishing fourth in the Coolmore. She resumes here in what is a weaker race than she was contesting last preparation and she maps well to get a brilliant run in midfield behind a very hot speed. I want to have something on the big roughie in Modear. She was brilliant when winning at this track and distance three back in front of Mariamia who won well here on Wednesday, before running two lengths off How Womantic at the Valley, which clearly isn’t a track she likes. She had no luck at Sandown last start when never seeing daylight in the straight, so you can disregard that run. She gets back to Flemington today and she will give you a good sight at big odds. Garner and Sisstar are the best of the rest in an open race.