With the AFL season fast approaching, here’s what we learnt from Adelaide and Gold Coast’s final preseason match at the weekend before the highly anticipated first round next week.

Will Brodie is set for a good season
Will Brodie staked his claim in Noarlunga Downs when the Suns downed the Crows by seven points in a tight encounter. The 21-year-old impressed by gathering 28 disposals as well as five marks and six tackles to go along with it.

After eight games in 2019 Brodie is set for a big season up on the Gold Coast and looms as one of their greatest young prospects as part of that midfield group along with the likes of Touk Miller and Lachie Weller.

In those eight games Brodie managed to amass in 2019 he averaged almost 22 disposals with an average of nine to ten of those being contested. He also averaged four marks and five to six tackles, and with only room to improve at such a young age, he is very ominous as the X factor for the Suns in 2020.

Brodie Smith should get midfield minutes
After debuting in 2011, Smith announced himself as a running medium-sized defender, playing on some of the best small and medium forwards in the competition. However, in Friday’s performance against the Suns he raised the question as to why the Crows coaching staff haven’t offered him a regular midfield role in previous seasons. At 189 centimetres and 90 kilograms, he is built strongly and definitely well enough to be considered a big-bodied midfielder in terms of the modern-day game.

A game-high 34 disposals and a goal to go with it, Smith was arguably the best on ground. With possible rotations of the Crouch brothers through the halfback line and with skipper Rory Sloane likely to run stints in the forward line, vacancies may open up for Smith to use his frame and speed to become a midfield weapon for the Crows. 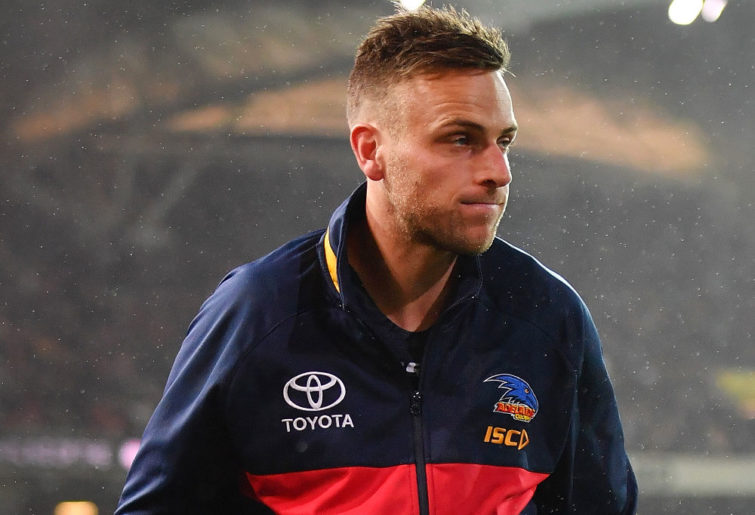 Taylor Walker may be Adelaide’s missing second ruck
After being replaced by Rory Sloane as the Crows captain, it might be time for Tex to try something a little different. In Friday’s battle with the Suns he was kept to just six disposals by a potent Suns defence, but his most noticeable appearances were in the ruck contests. With Josh Jenkins being shifted to Kardinia Park, the Crows were left with a lack of ruck stocks, with Sam Jacobs also departing to join the Giants. Riley O’Brien has a large load to carry in terms of the ruck contests for the Crows, and the experiment of Walker in the ruck proved somewhat of a success.

Walker kicked his only goal of the afternoon by outmuscling Zac Smith, snatching the ball out of the ruck and slamming it onto his boot, demonstrating he is very capable of competing against the big men. Finishing with six hit-outs and six disposals as well as the goal, the experiment of Walker as a backup ruck stock has emerged as a possibility for the upcoming season.

Darcy Macpherson could explode
An intriguing 2019 from Darcy Macpherson gave Gold Coast fans something to be excited about in what was a bleak season. Playing all 22 games, Macpherson averaged almost 19 touches, four marks and six tackles as well as booting 12 majors. In Gold Coast’s second preseason match against the Crows, Macpherson finished second overall for the Suns disposal getters with 31, which was complemented by a goal, three marks and five tackles.

Alongside the likes of Lachie Weller and Touk Miller as well as younger and upcoming players like Will Brodie, Matt Rowell and Noah Anderson, Macpherson is part of a solid midfield base stacked to the brim with talent, which may shock a few in the season proper.

Zac Smith is still very capable
On his return to the Gold Coast from Kardinia Park Zac Smith has displayed that he’s still very capable of competing with some of the best ruckmen in the competition. In the clash against the Crows at Flinders University Stadium he battled with one of the emerging ruckmen of the competition, Reilly O’Brien. Smith was busy with 16 touches as well as five marks and three tackles to go along with 39 hit-outs, which was more than the 30 hit-outs Crows players managed combined.

Peter Wright and Sam Day were backup ruckmen on the day, though Smith will generally play second fiddle to 2019 best and fairest winner and former Magpie Jarrod Witts. From a selection point of view it’s nice to see Smith is still very capable of competing against the best if Witts needs to be rested or, worse, gets injured.

Fischer McAsey can easily play at both ends
Fischer McAsey will no doubt be one of the stars of the AFL in seasons to come. Coming in at pick No. 6 in the draft, McAsey was the highest-rated pick of a key-position player, standing at 195 centimetres. At just 86 kilos, he can still put on some muscle, and with further preseasons under his belt he could be a weapon for the Crows.

The issue for Adelaide will be where they put him, as McAsey spent Friday’s game against the Suns at both ends of the ground throughout the contest. Beginning in the backline, McAsey showed a lot of promise playing on Suns key forwards Sam Day and Peter Wright. His reading of the play was first class and positioning in contests was very promising, as Day and Wright kicked just one goal between them.

In the later parts of the third and fourth quarters McAsey was instructed to go into the forward line as Taylor Walker began to move into a second ruck role. McAsey showed plenty of positive signs, getting both of his hands to many high balls while surrounded by large packs, demonstrating that if he put some hard work into his marking, despite it already being a strength of his, he could very well be one of the better key forwards in the competition.

McAsey also managed to boot a major yesterday after a 50-metre penalty was paid, and a smooth kicking action managed to see the ball home from 35 metres out. It will be an exciting dilemma for the Crows selection panel as to wear the youngster will play this season, if he gets his opportunity.

Brandon Ellis will bring a lot more than expected to the suns
Brandon Ellis is set to have a huge impact on the Suns list this season. The former Tiger was part of both premiership-winning sides in 2017 and 2019 and can bring a lot of that success and teach a lot, especially to the younger Suns, about his journey and what it takes to be the best side in the competition. His performance on Friday was of high quality also, collecting 27 disposals off the halfback line and out on the wing.

There were definite similarities to the way he played at Richmond as he often worked up the ground to create chances inside 50 for the Suns. On one occasion late in the game former Cat Jordan Murdoch ran into an open goal to give the Suns the lead on the back of Ellis’s efforts to get from the halfback line to half-forward and create an opportunity by kicking the ball into a dangerous area inside 50. Through that sequence of play Ellis missed two targets with his kicks despite the fact the play ended up being a goal to the Suns.

Throughout his time at Richmond, Ellis wasn’t particularly known for being an elite ball-user, but his hard running and experience with success will give a lot of insight to the entire Suns playing group as to what it is like to be the best side in the competition.

Ever since Port Adelaide played Adelaide at Football Park on 20 April 1997, the local derby has been known as the Showdown. It was Port Adelaide’s first year in the AFL and the Power won this first contest by 11 points. Since that time, the competition has been fierce, and in home and away matches […]

Yesterday the AFL stood down Crows assistant coach Ben Hart until June 22 and handed down a suspended one-match sanction to 16 Adelaide players. This punishment is sound.

Sixteen Adelaide Crows players who broke the AFL’s coronavirus training protocols have copped a one-game ban, which has been suspended for the rest of the season.