Back in 1990, Collingwood played Carlton in Round 2 at Waverley Park.

Collingwood had a relatively young team that had bombed straight out of the finals in 1988 and 1989. West Coast had smashed them in the season opener, and a question mark hung over whether coach Leigh Matthews could take the Pies any further. Carlton had missed the finals in 1989 for the first time since 1977 and were in something of a transitional period. They’d lost their season opener to Sydney by five points.

Matthews was looking for the right chemistry to give Collingwood a boost. They’d added pacey rovers Tony Francis (although he was suspended for this game) and Scott Russell in the off-season, but lacked key forwards. Brian Taylor (a genuinely good full forward in his day) was beginning to struggle with chronic knee problems. James Manson, their next best option, was more of a relief ruck. Craig Starcevich, at 193 centimetres, was more of a rangy flanker.

The clash opened and looked like a battle of two struggling teams. The biggest surprise was that Matthews elected to start Peter Daicos on the halfback flank.

Although Daicos had started his career as a centreman, the recruitment of Mark Williams in 1981 pushed Daicos onto half-forward flank, where he kicked 76.40. Not bad for a 19-year-old in just his third year. During a tumultuous 1982 season in which coach Tommy Hafey was sacked, Daicos kicked 57.38. As the 1980s went on, he again became a regular mid who rested forward.

In fact, he became a phenomenal midfielder – this is too often lost in recollections. He had poise and time like current Collingwood captain Scott Pendlebury, was sublimely dual-sided to the extent you didn’t know which was his natural foot, and overflowed with X-factor. But, for some reason, Matthews thought Daicos – with his stumpy little legs (Matthews’s own qualification) – had the physique that would make a good halfback flanker.

At halftime of an ugly game during an ugly, overcast day, the score sat Carlton 7.3 (45) to Collingwood 6.6 (42). It looked like it was going to remain a scrappy game. As for Daicos, he was ineffective at halfback.

The rest of 1990 is history. Daicos kicked 97 goals for the year. Collingwood won the flag. In his autobiography, Accept the Challenge, Leigh Matthews rates Daicos’ ability as a half-forward to kick 97 goals – often creating scoring opportunities on both sides of the body from half chances – better than Peter Hudson’s 150-goal 1971 season for premiers Hawthorn in terms of what it meant for the team.

It’s interesting how coaches perceive their players, and how they rate the potential of a player in a certain position as opposed to the position they’d best be in.

Last year provides another good example when David Teague succeeded Brendon Bolton as coach of Carlton. Teague threw his players in the positions they played best and let them loose, adopting a more attacking game plan. The result was that Carlton became competitive and they won six of their last 11 matches. Prior to that, they’d won only nine of their last 55 games.

Sometimes coaches can become lost in their own cleverness, or can let issues cloud their judgement and influence their beliefs. Football isn’t a difficult game: you win the ball, you pass to your teammates, and you kick goals. If you kick a bigger score than your opponent, then you win. Usually, you put your best players where they can do their best – unless you have a wealth of options, which necessitates they be fitted elsewhere, such as during Brisbane’s prime in the early 2000, Chris Johnson played off halfback due to the strength of their midfield.

I can appreciate that sometimes players have to be selected in positions that are best for the team, rather than best for themselves. Going back to 1990, Gavin Brown was played at full-forward. Brown is criminally underrated. If he’d been left on a wing, he would be remembered as one of the greatest wingers of all time. He won two EJ Whitten medals (best afield in a state game) as a wingman, which showed he could mix it with the competition’s elite. But, unfortunately, for the bulk of his career he was used as Mr Fix It at Collingwood, thrown into whatever position he was needed.

That can sometimes become a double-edged solution. You address one issue, but create another because that player’s not where they should be. Then it becomes an equation: does the team genuinely get more out of that player filling that hole, or would they get more out of that player in their best position? People might argue the team’s needs come first. Here’s another equation to consider, then: would the player in their best position compensate for a lesser solution filling the hole they’re being asked to plug?

As a practical example, it’s one where you can examine the cause and the effect and try to apply it qualitatively to the way the game evolved. The counter is if Brown had remained in the midfield, the Eagles might’ve still gained the ascendency. It’s all theoretical. We don’t know, unless we can play the same match over. We can’t. It is speculation. But we can extrapolate to the best of our ability.

Having qualified all that, I may be in the minority but just don’t get Darcy Moore being played at fullback at Collingwood. 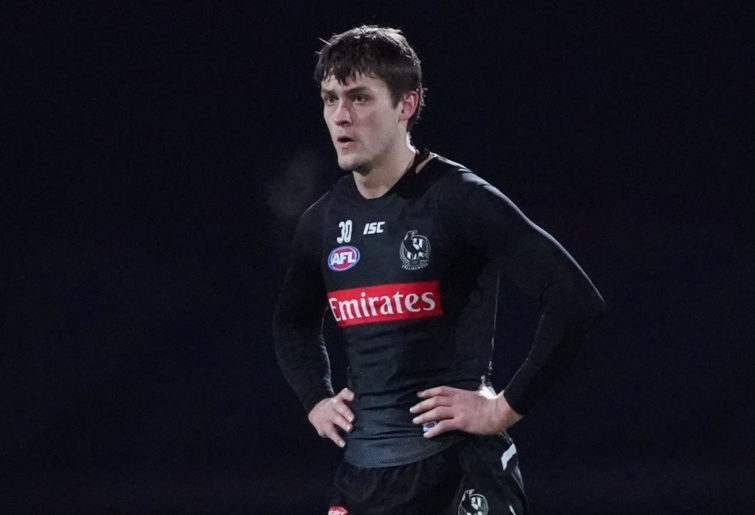 Here is this exciting tall prospect who’s quick for his size, a great mark, and a frightening proposition around goal. I understand the benefits of having him as a key defender – he brings the strength of intercept marking, has dash, and takes the game on. Last year, media compared him to Hawthorn legend Peter Knights.

But the problem is that while these are great traits – just witness somebody like Geelong’s Matthew Scarlett during his prime as a defender and playmaker – the other reality is that there are times as a defender that no amount of X-factor is going to stop a forward on the lead. You could have somebody dour in the same position and lose nothing. You might, in fact, gain something, because the dour defender may play closer to an opponent and stop those leads. Again, we dabble in speculative equations. But they’re worth considering.

I watched the Collingwood-St Kilda practice match on Sunday and listened to the commentators rightfully salivate over Max King as a forward, and all I could think is this is the way people should be speaking about Moore. These are futures people should be forecasting about Moore. What Collingwood have done is tantamount to St Kilda deciding to make Max King their new fullback, or GWS throwing Jeremy Cameron to fullback, or if Sydney threw Lance Franklin to fullback because of his athleticism, or Richmond decided to throw Jack Reiwoldt or Tom Lynch to fullback when Alex Rance went down with an ACL early in 2019.

Would those moves have worked? I’m sure they would have to some extent because these are great players. They would’ve wowed fans and media. They would’ve carried the comparisons of being the next Peter Knights. But would that truly have been where those teams could get the most out of these players? Was something being lost in the translation, some contribution that would’ve compensated for the patchwork fix that player had become in a different position?

Collingwood has had problems finding genuine key forwards since the decline of Travis Cloke. They’ve used lateral thinking and banked on Hail Marys, like international rookie Mason Cox, rookie Brodie Mihocek, a lowly draft pick like Corey Gault (pick 65), and now the trade for Darcy Cameron. That’s no disrespect intended to these players. But the bulk of elite forwards have come high in the draft – Lance Franklin, Jarryd Roughead, Nick and Jack Riewoldt, and Tom Lynch. The only genuinely elite forward I can think of who’s come lower in the draft is Ben Brown (pick 47), so it can happen. It’s just less likely.

Defenders are another brand altogether. While, obviously, clubs have taken defenders with high picks, gems are regularly found lower in draft also: Jeremy McGovern was number 44 in the rookie draft. Tom Barrass was pick 43. All Australian fullback Harris Andrews was pick 61. Jordan Roughead was pick 31. Alex Rance was pick 18. Dylan Grimes went unselected in the national draft and was pick two in the pre-season draft (equating to pick 97).

Moore debuted at Collingwood during a period when they were overhauling their list and victim to heavy injuries. They fell out of finals contention for successive seasons, and fielded sides that regularly committed skill errors, struggled to move the ball, and struggled worse in their delivery up forward. Their forward line was often dysfunctional. The coaching panel was constantly under pressure.

It’s worth remembering all this when investigating Moore’s earlier forays up forwards, because even with all that going on, despite his youth and inexperience and lack of bulk, he still looked dangerous. He still looked an excellent prospect for the future. But in the two years (2018 and 2019) Collingwood have finally found functionality under the current regime, they’ve had Moore at fullback (although he was injured the bulk of 2018).

Here’s a hypothetical: if Moore wasn’t available at all, would it be easier to solve Collingwood’s lack of a key forward or their lack of a key defender? In recent years, Collingwood’s done well with strategic trading to pick up Jordan Roughead and Lynden Dunn. Both have been brilliant for the Pies. But as for their forwards? They’re still trying different things.

Darcy Moore receives a lot of adulation as a fullback. And, I agree, he’s great.

But the characteristics that make him a great fullback could make him a brilliant full forward.

Ultimately, I see the current use of him as a waste of material.

Sometimes too much of a good thing can extend too long a time, and success on and off the field can cloud just when the time has come to move on.