Wests Tigers veteran Benji Marshall admits being proud to have defied Father Time for as long as he has following his starring role in his side’s season-opening NRL win.

Marshall wound back the clock with a solo try, two try assists, and four goals in the Tigers’ gutsy 24-14 victory over St George Illawarra on Sunday night.

The performance comes despite Marshall starting the season as the second-oldest player in the league, one year younger than Cameron Smith.

“I am actually proud of myself that I am still playing,” Marshall said post-game.

“There was a pretty tough patch there when I thought I was going to have to retire, especially when I went to Brisbane.

“But going to Brisbane was where I probably found the love for the game again.”

The 35-year-old, who spent three years with the Dragons, is widely tipped to retire at the end of the year, and joked about starting a farewell tour at WIN Stadium.

“I was going to do a lap of honour today just in case,” Marshall said.

But the 2005 premiership-winner declined to confirm that this season would be his last, suggesting that his decision wouldn’t hinder the club’s salary cap.

“I could probably play again but like I said, it is a long season. There is no rush. I am not Cameron Smith. I am not going to take up most of the cap,” he said.

Tigers coach Michael Maguire was unafraid to name Marshall alongside Smith as among the game’s best players despite their age.

“People compare Benji and Cameron Smith – they’re two of some of the best players in the game,” Maguire said.

“A lot of it’s between his ears, what he wants to achieve.

“He’s just having a lot of fun at the moment.

“We’ve got a fairly young squad. So to have someone like Benji and Chrissy Lawrence, those guys are really leading. That’s part of the job.”

Sources close to the Wests Tigers leadership group have reported deep concerns that the team has produced back-to-back wins to suddenly move into sixth place. 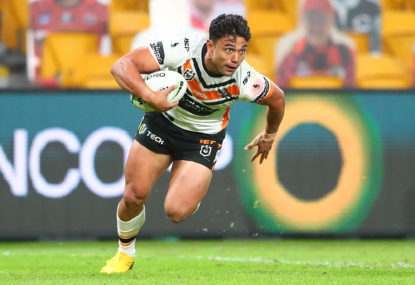