The NBL will take up to two days to decide if a winner of this year’s title will even be crowned but Sydney coach Will Weaver says that’s irrelevant after the threat of coronavirus forced the cancellation of the grand final series with two games to play.

Down 2-1 and due to play defending champions Perth on Friday, the minor premiers informed the NBL they would not travel to Western Australia as planned on Wednesday.

The NBL promptly cancelled the best-of-five series, with a decision on which team, if any, claims the trophy in the next 48 hours.

The Kings’ decision came as Western Australian health experts called for a state border closure, the club confirming on Wednesday it was a move made with the “well-being of society” in mind.

“Not to be flippant, but it couldn’t matter less to us in the scheme of things,” Weaver said when asked about the process of deciding a champion.

“The relevance of the competition is so greatly diminished by this.

“Personally I would be willing to risk a lot to have the chance to compete and win the championship and know that’s the view of any of our players.

“But I’m proud that the decision was made to reflect the fact our competitive desires are well and truly secondary.”

Weavers’ Kings became the first team to lead the league from the first to last regular-season round this season, but Perth sit just one game from their 10th NBL title.

All three games of the final series have gone the way of the visiting team, with the last two played in empty stadiums.

“We respect the decision in what are extraordinary times for everyone,” NBL owner Larry Kestelman said.

“We are understanding of not just the players’ health and well-being but also their desire to be with their families, especially given so many of them have family overseas.

“With Perth leading the best of five game series 2-1, we will now consider a decision on the outcome of the championship over the next 48 hours.”

It is a bizarre conclusion to arguably the league’s most successful season that, thanks to the performances of NBA hopefuls LaMelo Ball, RJ Hampton and Didi Louzada, drew record crowds both in stadiums and online.

“This has been an incredible season for the NBL and one of the best in our 41-year history with record attendances and world class basketball,” Kestelman said. 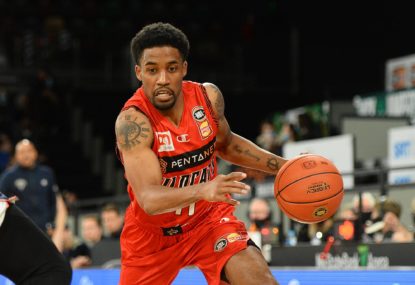