Ruthlessness of intent is the quality that delivers AFL flags

What is it that distinguishes two opponents?

Skill is the obvious delineator. And that’s true. Skill separates opponents. But it’s not always the final delineator. There are plenty of examples of more skilled opponents or teams who’ve lost.

Luck may be another factor. But how legitimately is that the decider? There are plenty of advocates for the argument that you make your own luck. I subscribe to that theory to an extent. To subscribe to it arbitrarily implies that luck doesn’t exist at all – and it does. In every walk of life. Sometimes, you just get lucky. Just as people win at lotto, athletes can benefit from luck.

But what drives somebody to win?

In tennis, Roger Federer is a sublime talent. Then Rafael Nadal came along. Is this now just a competition of skill advantaged by preferred surface? That’s an obvious influencer. These two looked like they would dominate tennis indefinitely. Then along came Novak Djokovic. He had it rough early. He had all the talent, he had all the skills, but what dragged him into the contest so he was able to compete against two legends who were asserting equal claims to being the greatest ever?

Andy Murray then factored into the equation. Arguably, Murray compared with the big three in terms of skills and talent, but struggled to haul himself over the line. He earned a reputation for struggling in finals. While Djokovic creeps up on Federer and Nadal in terms of grand slams, Murray has battled away.

It happens in every sport. You can be talented. You can have all the skills. You can have experience. You can have the resources. But come that final competition – be it a tennis grand slam final, a Super Bowl, a World Cup, a golf tournament, an AFL grand final, a heavyweight bout, or whatever the case – something happens.

In regards to individual sports, we can highlight temperament. Greg Norman was an exquisitely talented golfer, but that sometimes failed to manifest itself come a decider. In this case, we might point at the individual, or the team. The Buffalo Bills lost four consecutive Super Bowls from 1990 to 1993. It’s happened. And happens. And will again.

It’s understandable that failure invites pressure that might constrict talent and skill, and thus hinder an individual’s or team’s effort when it matters.

But how does that translate when it occurs repeatedly for a team across generations? One team has no personal connection to the other. Do they struggle with the history of their club? Is that a burden that grows heavier come some ultimate contest? Do they feel a responsibility that asphyxiates them? 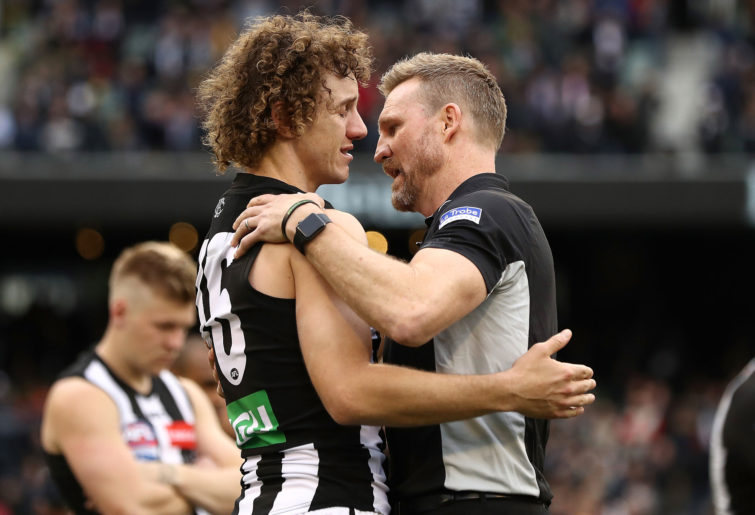 When you get into this sort of statistical reckoning – a record of two wins, two draws, and eight losses (and this is just in my lifetime of watching), you have to start querying why this happens.

Is it just skill and talent? During Tommy Hafey’s tenure from 1977 to 1982, it’s said that Hafey – restricted by the club’s spendthrift recruiting practices at the time – slapped together teams good enough to compete, but not good enough to win flags. This is something I’ve heard repeatedly, and I continue to hear repeatedly.

But if you troll through Collingwood’s records, they often beat their grand final opponents in home-and-away games and/or in finals, but then failed in the grand final. The point here is that Collingwood had enough skill to beat their opposition, and on occasion they proved that in a final, and in a number of grand finals they built what you might’ve considered winning leads, only to ultimately fail.

This is a pattern that’s repeated through generations, so it can’t always be aimed specifically at a certain team, or group of players, or a single coach.

As an outsider looking in, the one thing I think Collingwood has lacked – although I think this applies to many clubs – is ruthlessness of intent: that merciless attitude that they must win at all costs.

This is not to suggest that they cheat or play unfairly, but that they maintain an attitude that transcends the baseline for competitive nature and elevates into a drive to play and to fight to win and be uninhibited in the contest. It’s the difference between a player who wins repeatedly, as opposed to another who might be of equal skill but regularly fail to capitalise. 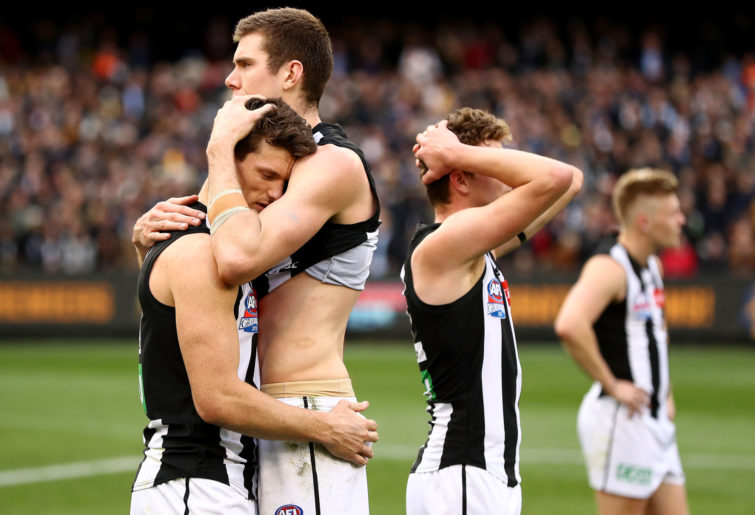 Franklin kicked his two goals early. The Hawks trashed the Blues. Fevola ran amok in the second half and got to 99 goals. Hawthorn coach Alastair Clarkson instructed his players that under no circumstances was Fevola to get his 100 and detract from Franklin’s night. For the rest of the game, the Hawks double- and triple-teamed Fevola. Fevola missed his 100. The Hawks smashed the Blues by 78 points.

Some may consider that petty. Campbell Brown expressed regret. But I look at that as instilling ruthlessness that – at all costs – is going to prohibit the opposition from experiencing any joy, regardless of the circumstances. It would’ve been easy for the Hawks to become lax given they were playing for nothing and that they’d established their dominance early – plenty of teams would’ve behaved that way. But Hawthorn maintained that ruthlessness of intent regardless.

The Hawks were well known for their unsociable football when they came under coach Clarkson, but I look at it as a single-minded focus that would do everything it could to not be denied while playing their natural game. That’s an important qualifier. Some individuals and clubs don’t play to win, but not to lose. Collingwood’s efforts in the 2010 grand final draw are a prime example. In the first half, they played to win. In the second half, they played not to lose.

And they have built a psychology within that club that is brutal and single-minded and irresistible. Talent, skill and luck will get them as far as humanly possible. Attitude – when something more is needed as a decider – will do the rest. Attitude will ensure they play their game to the end. 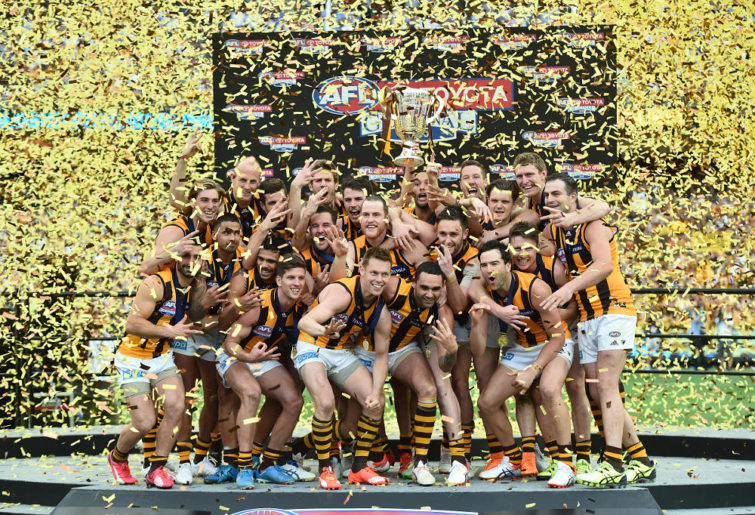 This is what makes winners. They produce their best regardless. When the pressure is applied, they still take their chances. When they’re in front, they play to build the lead, rather than protect it. Not everybody does that. Everybody would know an athlete or a club who has all the ability – more ability than their opponents – but who is unable to execute that ability to its fullest potential, or maintain it consistently.

It comes down to that attitude that is cultivated from within, and perpetuated to be a guide – and a driver – when those other prerequisites might falter.

Some players have it naturally, or develop it, and that becomes that catalyst within their own playing group. While Nick Maxwell was probably only ever considered a good player, his drive elevated him into a strata where you could understand why he was chosen as captain.

I credit Nick Maxwell for saving Collingwood’s 2010 premiership aspirations because when that first grand final was on the line, he exceeded everything he knew and everything he was to find a way to impact the contest.

Richmond were a laughing stock not too long ago. Brendon Gale came out ten years ago and blueprinted what he expected from the Tigers. Most of us laughed even more. But somewhere within that club, they cultivated that ruthlessness of intent, and it’s resulted in two flags. People laud Dusty Martin for his talent. I look at captain Trent Cotchin as the true driver behind the Tigers’ dominance. He showcases that ruthlessness of intent.

Watching my club, Collingwood, and speaking from the experience of watching the 2019 preliminary final and the 2018 grand final unravel before my very eyes, I question where that ruthlessness of intent is, and who might be the driver.

Here’s how Collingwood, Essendon and Fremantle are shaping up ahead of the restart. Collingwood Magpies The five most talented players 5. Taylor Adams is a prodigious talent, but he’s fifth on the list, because he has a good team of talented players around him. 4. Steele Sidebottom has the ability to be a permanent part […]

Collingwood President Eddie McGuire said the club is willing to go to court if the AFL allows the Port Adelaide club to wear the famous prison bar jersey in the showdown against Adelaide next year.