AFL in the time of COVID-19: Sticking together while social distancing

The scheduled first bounce of the 2020 AFL season is less than 48 hours away. And yet, at time of writing, we are without any formal indication as to whether Round 1 will go ahead.

On Monday, Gillon McLachlan fronted the media and, doing his best Jeff Goldblum in Jurassic Park impression, told us “footy will find a way” in 2020.

The AFL CEO’s announcement that the home-and-away season would be shortened to 17 matches was followed just 24 hours later by AFLPA CEO Paul Marsh urging the league to keep the possibility of a 22-game fixture open.

It appears inevitable that the season will – at some point over the coming months – need to be called to a halt, and for how long that might last we simply don’t know.

For that reason, McLachlan confirmed that the league could play on as late as the end of the year if that is what’s required to complete something resembling a normal competition.

In all of the VFL/AFL’s annals there has never been a premiership match played in the months of November through February, but the odds seem to be shifting in favour of the league making history in 2020.

That is just one of the ways that the competition might leave normalcy behind, with McLachlan also noting that with matches slated to go ahead without crowds for the forseeable future, that opens up a much wider range of potential timeslots.

Only 47 VFL/AFL matches have ever been played on a Tuesday or Wednesday (or 0.3 per cent of more than 15,000 matches total), but that number could radically increase over the coming months.

Shortened game lengths, top-up recruits via a mini draft, and pretty much any other wild and crazy idea you can think up remain on the table – so what happens next? 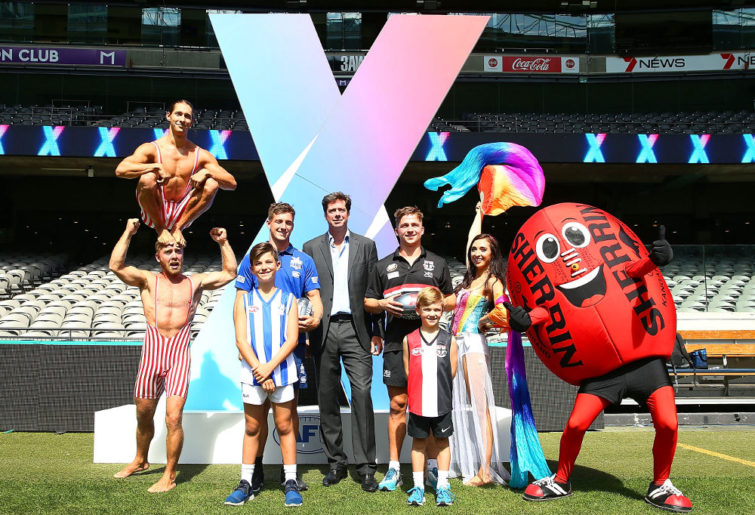 McLachlan said on Monday that a decision would be announce within 24 hours on whether to go ahead with Round 1 as scheduled, but late on Tuesday a final call had been delayed further.

All going to plan, we should know one way or another by the end of today, but not a lot of things have gone to plan lately, and holding your breath would not be advised.

I’m in two minds on this, as I suspect is the case for most.

On Saturday, after a full two days not having gone five minutes without thinking about COVID-19, I listened to a footy podcast while doing some late-night grocery shopping (yes, I own nine cans of beans and four tins of tomatoes).

When it finished, I felt blown away by how refreshing it had been to take my mind off things and just think about sport for a while.

A distraction of that nature is desperately needed for all of us who have spent the past week or so thinking constantly about global problems for which we have no power to provide a solution.

And that’s not even to mention the plight of your friendly neighbourhood AFL hot-take writers – such as myself – who have already exhausted their reserves of potential pre-season content!

However, on the other hand sits the reality that while sport would be a blessed tonic to our turmoil, it still doesn’t come close to cracking the shortlist of our present top priorities and if public health can be at all be served by bringing it to a halt, that should absolutely be the decision made.

If we are genuinely sitting this close to the deadline and still not sure whether rolling the dice is a good idea, then pressing pause until things become a little less uncertain is probably the right call.

Of course, what drives so much of this is the money motive: players know shorter seasons will likely mean a paycut, and the AFL has an obligation to provide broadcasters with a certain volume of content that it seems destined to fall well short of.

And while thinking of money at a time like this may seem crass, the reality is that while plenty of it goes to executive bonuses, it also pays those at the bottom of the footy industry pyramid, many of whom don’t know right know if there’ll be work available for them in the weeks to come.

All that can be said with certainty right now is that we are most likely in for the strangest season in the history of the game, and one that – when it’s through – we’re bound to look back on and say, “Gee I remember when…”

The most frustrating aspect of our current crisis is that coming together and comforting each other, the most natural thing to do in times of trouble, is – and for completely legitimate and sane reasons – exactly what is being advised against.

However one of my most-loved things about footy is that it creates a community across time and space, between people like us who may never meet face-to-face.

Wherever you’re reading this, I hope you’re well, and blessed by an abundance of toilet paper and canned goods. We may need to stay at least 1.5 metres apart, but that doesn’t mean we can’t all go into uncertain times together.

What’s your favourite food to stockpile? Which club is your finals smokie? What kind of content would you like to see when match cancellations arrive – possibly very soon? And how’s your mental health holding up?

Let me know in the comments, and let’s celebrate the great community that we are a part of.