The AFL season starts, hopefully, with the now traditional opening game blockbuster between Carlton and Richmond at the MCG on Thursday, 19 March.

This year the game – without a crowd of supporters at the ground and therefore missing the roars of the estimated 80,000 fans – appears to have more appeal as a spectacle than has been the case in recent years due to the narrowing gap between the capabilities of the two teams.

Richmond, despite the loss of two top-100 game players at the club since 2019, still can lay claim to being the most talented and settled side in the league and have a wonderful mix of senior players, skilful champions and up-and-comers.

They are also the form side, having won the premierships in 2017 and 2019 and being surprise losers to Collingwood in the 2018 semi-final. Alex Rance’s surprise retirement at the end of the 2019 calendar year may not have caused much of a ripple at the club due to the outstanding form of his replacement Dylan Grimes if it wasn’t for the fact that backup Brandon Ellis had been allowed to make a new career at the Gold Coast Suns.

Carlton welcome back exciting small forward Eddie Betts after six successful years at the Adelaide Crows to continue his climb up the top 100 list at the Blues. Betts started his career with Carlton in 2005 and currently sits in equal 47th place (with Jarrad Waite) among the club’s game players and 13th place among the Blues’ top 100 goalscorers.

If the 33-year-old Betts can reproduce the form he showed before his defection to the Crows he will be a great fill-up for the Blues, whose present leading goalscorer is Marc Murphy, who sits 18 positions lower and has kicked more than 100 fewer goals.

Betts’ means that Carlton now has five top-100 game players and Levi Casboult could make it on to the list by season’s end despite the home-and-away fixture being reduced to 17 games. On the other hand, the Tigers can still field eight top-100 players including four 200-plus game players.

Carlton’s two most experienced players (Kade Simpson and Marc Murphy) share more than a top ten games played position at the club. They have been teammates in more games than any other current players, and if they both play in Round 1 it will be their 260th game together and take them into the record books as equal 20th of all time. 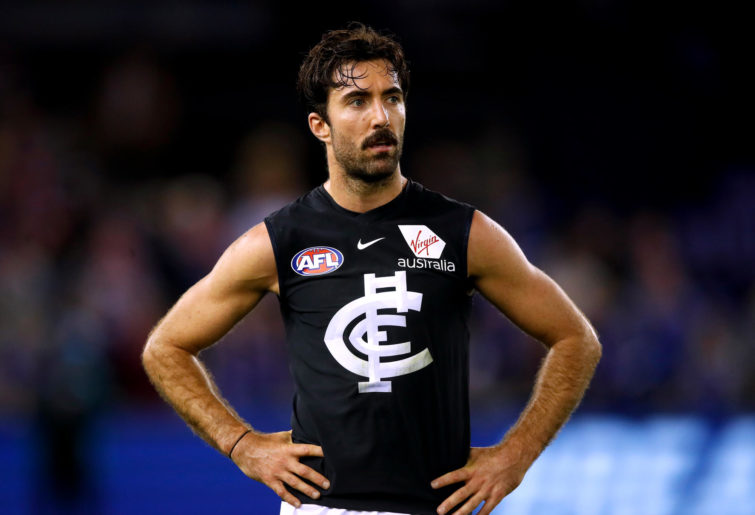 A Carlton loss would take Simpson to within two games of a record he has no desire to hold: the most losses by any player in the VFL/AFL. The record is currently held by former Fitzroy great and 1969 Brownlow Medallist Kevin Murray (208).

At Richmond, Jack Riewoldt’s game will take him one game closer to a coveted top-ten game player position when he joins Vic Thorp and Perce Bentley in 11th place on the Tiger’s all-time top-100 game players. Thorp was regarded “as one of the greatest defenders of his era” (1910-1925) and missed only four games in his first 11 years at the club.

Amongst his achievements were two premiership flags, one losing grand final and the 1924 Best and Fairest Award. Perce Bentley also played at the Tigers for 16 years.

A strong ruckman with a good tactical mind, he captained Richmond in 1932 and 1933 and then captain-coached them from 1934 until 1940, picking up two premierships along the way.

In 1941 Bentley started an 11-year coaching career at Carlton, again winning two premierships. If he was alive today (he is not, he was born in 1906) he could truly be said to have a foot in both camps.