Brady, 42, has been the face of the New England Patriots for two decades, but said on Tuesday he was leaving the franchise.

“Although my football journey will take place elsewhere, I appreciate everything that we have achieved and am grateful for our incredible TEAM accomplishments,” Brady wrote in a Twitter post on Tuesday that instantly went viral.

He did not elaborate on his plans but previously said he wanted to continue playing and was unlikely to retire.

The announcement of his departure came a day before he became a free agent.

NFL Network reported Brady’s deal with the Bucs would be worth about $30 million ($A50m) a year.

By joining a team with an elite receiving options and a top defence, Brady has a chance to join Peyton Manning as the only quarterback to win Super Bowls with two different teams.

Brady’s records while in New England include most Super Bowl victories (six) and appearances (nine) and most play-off wins (30).

Patriots head coach Bill Belichick, who formed one of the NFL’s most successful partnerships with Brady, said in a written statement that the quarterback was one of the Patriots program’s “original creators.”

“He is a special person and the greatest quarterback of all-time,” Belichick said.

Brady was a lightly-regarded prospect coming out of college, the 199th pick in the 2000 NFL Draft.

At the start of the 2001 campaign Brady took over the Patriots’ starting role in the second game of the season after starter Drew Bledsoe went down with an injury.

With Brady, the Patriots were a perennial contender who in the 2019 season extended their NFL record by winning an 11th consecutive division title.

Brady also had detractors who accused him of cheating in 2015 and he was ultimately suspended four games for the incident that became known as “deflategate” even though he denied wrongdoing.

But for all his achievements in New England, Brady’s reign ended with a whimper when the Patriots were knocked out of the playoffs in a surprise loss to the Tennessee Titans in January.

It seems he now has a new home and a chance to write a final chapter in a remarkable career, including possibly another Super Bowl appearance.

New England Patriots tight end Rob Gronkowski has announced his retirement, ending one of the NFL’s most dominant and colourful careers. 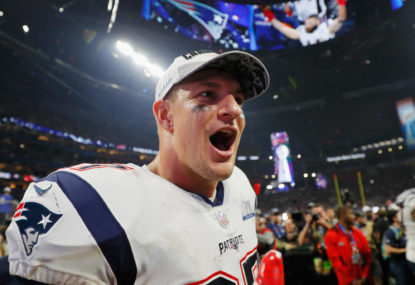 There is a romance, a pleasurable anticipation, a certain hopeless inevitability, in supporting a team that never wins. The sweet anguish of unfulfilled longing is a mistress impossible to resist. It is one of those things that makes up a fan(atic).