My tips for Round 2 of the NRL

Let’s look at the second weekend of NRL action.

Bulldogs vs Cowboys
After tough losses for both teams, they will be looking to get a win to have a 1-1 record after two rounds of the 2020 season. I have doubts that the Bulldogs’ defence can hold against some of the Cowboys players and the Dogs’ attack looked very dull against the Eels in Round 1.

The Cowboys looked very good in the final 20 minutes against the Broncos last Friday night but they need to produce more in attack and you look at who the Cowboys have and you think they will down any team on their day.

Unless the Bulldogs have learnt some new attacking plays I don’t see a Doggies win.

Dragons vs Panthers
After downing the premiers 20-14 the Panthers have to be favourites in this one with Nathan Cleary leading from the front against the Dragons, who bombed two chances to win the game against the Tigers last week. Matt Dufty returns to fullback and Zac Lomax moves to the wing for the injured Mikaele Ravalawa.

Broncos vs Rabbitohs
The rivalry will continue when the Broncos take on Souths at Suncorp Stadium and Souths will be hoping to have three consecutive wins over the Broncos. Some big match-ups are David Fifita and Payne Haas against Cameron Murray and Liam Knight. Souths fans don’t expect Latrell Mitchell to play 80 minutes this week.

Jamil Hopoate has been promoted to the starting side after Tevita Pangai Jr was suspended, which is a big out for the Broncos. 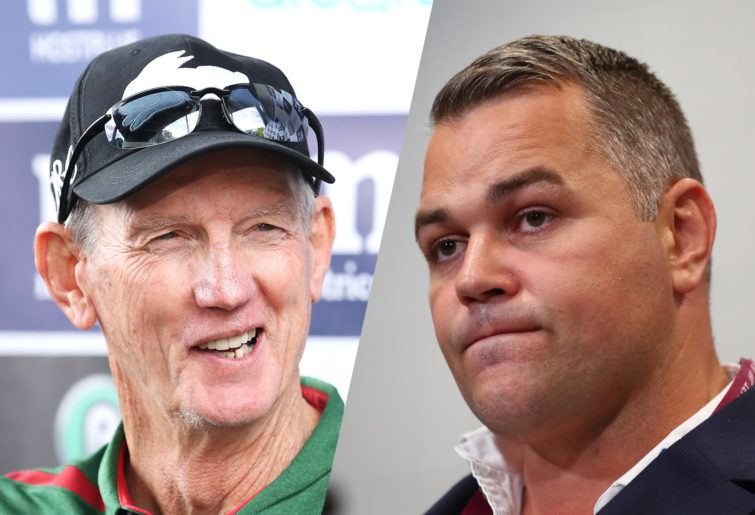 Warriors vs Raiders
After a shocking 20-0 loss to the Knights and losing Peta Hiku and Patrick Herbert due to them returning to New Zealand for family reasons, the Warriors have called in Adam Keighran and Adam Pompey to fill in. Roger Tuivasa-Sheck against Charnze Nicoll-Klokstad will be exciting but the Raiders will be too good.

Roosters vs Manly
With both teams coming off tough losses last week, the Roosters and Manly will be looking to get a W on the board. The Roosters’ win rate against Manly is their worst (35 per cent). The new halfback Kyle Flanagan taking on the experienced Daly Cherry-Evans will be good to watch, as will Addin Fonua-Blake taking on Jared Waerea-Hargreaves and James Tedesco taking on Tom Trbojevic.

Sharks vs Storm
After a tough loss against Souths in Round 1, Shaun Johnson and the Sharks will be hoping to get a win on the board but in the way is Cameron Smith and Ryan Papenhuyzen. Johnson will need to play like he did last week if they have any chance of winning but the smarts of Cameron Smith may be too much for the Sharkies.

Tip: Storm by eight plus.

Tigers vs Knights
With both teams coming off big wins against their opposition in Round 1 – with Benji Marshall winding back the clock and the Mitchell Pearce-Kalyn Ponga combo firing – this game will be exciting to watch. The Tigers have won the last three games against the Knights but Ponga and Pearce could hurt the Tigers.

Tip: Knights by 12 points or less.

Titans vs Eels
The Titans have not won a match since Round 13 last year (26-18 over the Broncos), losing a club record 12 straight matches. Mitch Moses is 11 points away from 600 NRL points and he will get that against a poor Titans side. Tyrone Peachey has been moved to the bench for Brian Kelly.