The Bulldogs had 44 per cent of possession, 39 missed tackles and 16 errors after Jason Taumalolo had a monster with 345 run metres, 26 runs, one try, eight tackle breaks, one line break and 19 tackles, which summed up how the Doggies played.

Dallin Watene-Zelezniak was very disappointing with three errors and being sin-binned in the last 15 minutes of the first half. He needs to move to the wing and Nick Meaney to fullback or Watene-Zelezniak to centre and Will Hopoate to fullback, which can spark something in attack.

Lachlan Lewis played 55 minutes after scoring a try in the opening five minutes of the first half, producing 15 tackles, one 40/20 and nine kicks for 363 metres. He was replaced by Jake Averillo, who had one try assist and one kick for 25 metres. Lewis – after scoring his try early in the game – turned out to have a poor performance, throwing a few bad passes and his timing was very off.

Adam Elliott was very good, playing 67 minutes, one try assist, 17 runs for 139 metres, one tackle break and 44 tackles at lock. Will Hopoate proved a handful once again with 178 metres and one error.

Scott Drinkwater was very good with one try, one try assist, 97 run metres, four tackle breaks, one line break and three kicks for 100 kick metres. The other half Michael Morgan showed his skill with the boot, and made 18 runs for 527 metres and one try assist.

Valentine Holmes, despite having two errors, played better with one try assist for 17 runs for 117 metres and Coen Hess looked very good on the edge, playing 80 minutes for one try, nine runs, 75 metres and 35 tackles.

Missing Corey Harawira-Naera in the forwards and Jayden Okunbor on the wing, relying on young halves and with Dallin Watene-Zelezniak playing poorly, the Bulldogs need to produce more attacking ability out the back. Because as good as the Doggies’ defence may be, their attack is very poor and needs to improve because next Sunday they take on the Tigers.

The Cowboys looked very good with Scott Drinkwater improving a lot and Holmes looking very good and their next game will be next week against Mitch Moses and the Eels on Saturday night.

The big question about the Cowboys is who will help Taumalolo in the forwards but Coen Hess and Francis Molo off the bench looked very good.

Holmes’ goal-kicking was a big question mark heading into the game as well but that question mark has turned into a tick after kicking three out of four goals with one penalty goal.

A revised NRL season and representative schedule for 2020

We live in unprecedented times due to the ever-apparent pandemic we are currently facing. Like the majority of readers and contributors to The Roar, I am stuck in my home as a result.

A revised NRL season and representative schedule for 2020

Dogs to stick with Lewis in the halves 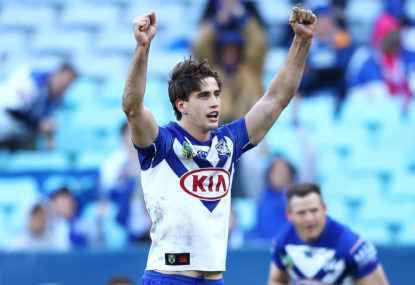 Dogs to stick with Lewis in the halves

It was called a miss- but should it have been? 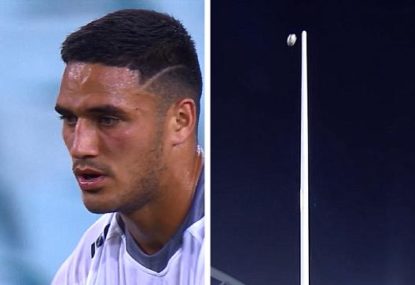