Ah, Slipper Day! My favourite day on the Sydney calendar, featuring the Ranvet over distance and Chipping Norton at weight-for-age, the babies in the Slipper and the Galaxy handicap over the short trip.

The predicted rain is now not predicted, hopefully this week my numbers align with horses that aren’t going to be scratched if/when the heavens open.

As for the running tally, I’m back on the good side! Zoffany’s Lad at a nice price did the trick. This is not an easy card but there looks to be plenty of value.

Units bet: 88
Units won: 89.60
Based on one unit being equal to $1 win bet – NSW dividends (see comments for any changes based on scratchings or track condition).

Race 1 – 1 Cosmic Force (one unit)
Taking the shorts with the top-weight Cosmic Force in the first. Was very impressive fresh and carried 59 kilos well enough. He beat California Zimbol pretty comfortably there, I’d expect improvement though.

Race 2 – 11 Fun Fact (one unit)
Plenty of chances in this. Fun Fact seems to get a pretty soft lead, and while there are concerns about him running out the 2400, if he is able to get things his own way he is the right price. Young Rascal is here after racing against the best in Hong Kong, he could dominate these if ready to go. Yogi rates well at odds, and no knock on Mugatoo, rising through the grades beautifully and shouldn’t be too far away.

Race 3 – Greysful Glamour (one unit)
Rolling the dice and taking another leader, Greysful Glamour pulled up lame last time, gets to her favoured distance range here and will be in front for a long way (hopefully the whole way). Luvaluva can be hit and miss but is competitive on her best form, Another Dollar was good last spring over this sort of trip and Gayatri (backed from $19 to $10) rates around the mark as well.

Race 4 – 2 Addeybb (one unit)
Thinking class prevails in the Ranvet with not a huge amount splitting Addeybb, Verry Elleegant and Avilius under weight-for-age conditions. Addeybb was excellent after a freshen-up at Royal Ascot in October, has had a solid breather but may still be too good for these on his way to the Championships. Verry Elleegant was great behind Te Akau Shark over the mile and would love the rain to come. Avilius is always around the mark and will be running on (three from three at Rosehill).

Race 5 – 2 Te Akau Shark (two units)
What a race! Have to stick with Te Akau Shark. His two runs this prep have been amazing and he’s (finally) won me over. Super Seth is an exceptional three-year-old who’s tried and tested against the older horses. I love The Bostonian, he rates highly on the fresh win but isn’t as dominant over the 1400-1600 range.

Race 6 – 4 Sherwood Forest (one unit)
Sticking with the Kiwis and taking the NZ Derby winner Sherwood Forest at double-figure odds to take the Guineas. Will love the 2000 metres and handles all conditions. Shadow Hero is a deserved favourite and should be around the mark. Chains of Honour ($61) isn’t the worst. His Queensland win was good and he was at 2200 second-up there (2000 here). Castlevecchio is a big-time performer, second in last year’s Cox Plate and should be ready for a big finish third-up.

Race 7 – 2 Hanseatic (one unit)
Finally having a dip in a two year-old race! I’m going to forgive Hanseatic’s second in the Blue Diamond. I’m loving the $7 odds and hoping he makes amends here. Note: no wet form is a query. Hungry Heart might be the best filly, looking likely to be in a nice spot and should be an improver with this being only her third start. Tagaloa is class while seven or eight could pop up. Lottery!

Race 8 – 7 Miss Leonidas (one unit)
Just when I was thinking things would get easier, the Galaxy pops up with positive ratings everywhere. Who’s beaten the handicapper? Well, Miss Leonidas will carry five kilos less than weight-for-age, where she popped up last prep at any old price to just get done by Nature Strip. Barrier one, should lead, I’ll either be whipping my leg at the hundred or ripping up my ticket. There are plenty of other hopes. Soothing gets in really well and is three from five fresh and five from 13 at 1100 metres. Anaheed’s first-up win was super. A repeat of that here and she’s in the mix. Pierata and In Her Time are class, the other Cummings horses are all in the quaddie – yikes!

Race 9 – 5 Grey Shadow (one unit)
It’ll be some quaddie if it gets there! Grey Shadow (yes, another grey) has a weight drop here after finishing fast last time and is two from four second-up from a spell. Hopefully gets a drying track. Manicure looks a big threat along with River Bird, who’ll be running on late.

Good punting and good health everyone!

There are two meetings to look at on Tuesday, with my attention at Melton and Menangle. Below are the best bets for the respective programs. 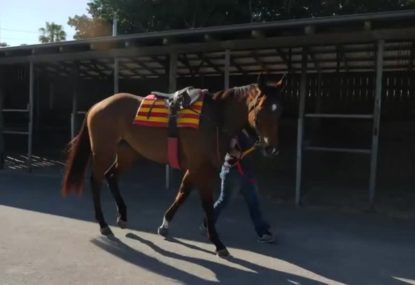